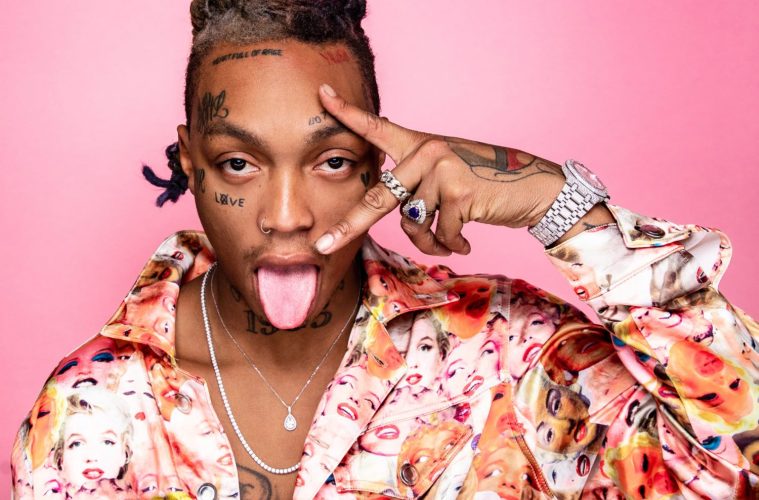 Back in Orlando, Tyler Jamal Brown was another kid working at Dunkin’ Donuts and getting into enough trouble with the police to get thrown out of his mom’s house. He knew that he needed do something to change his course, so he turned to music and a new name.

“I started when I was 13 or 14,” Tyla Yaweh says. “That’s when I really started going crazy on music – going to the studio, and releasing music too. When I started releasing music, I was getting good feedback from my high school. It just made me want to go harder and become an artist. I was living in Florida at the time.”

So he has his career path clearly in mind, but he also suspected that Florida probably wasn’t the right place for him to hone his already-developed skills.

“I moved here when I was 18, and I just thought it was time to go to the land where everybody makes their dreams come true and that’s L.A.,” he says. “I packed my bags, stopped everything, and drove to L.A. with my friends. Now I’m here today. It’s crazy.”

Unsurprisingly, Yaweh points out there are big differences between carving out a rap career in Los Angeles and Orlando.

“Florida is more a retirement state for older people to be honest,” he says. “At the same time, there are a lot of crazy things that go down in the streets out there. There’s a lot of street activity that you can get yourself caught up in, and you can either be dead or in jail. It’s the same thing in L.A. too – it has its pros and cons. But I just felt like I was going to make it out here. This was the spot to be.”

His decision to move here was swiftly justified; he was discovered by manager Dre London and, in turn, Post Malone.

“My manager [Dre London] reached out to me through Instagram because he saw me doing a show in Oakland,” Yaweh says. “I was crowd surfing with barely anybody in the crowd – just a few hundred people. He saw that energy of a star and hit me up. This is right after I did a song with his artist and they loved the song. That’s what got me part of the whole team with Posty and stuff. Get cool with Posty and getting to know him, and he accepted me. I made a friend and he’s a superstar.”

Yaweh’s forthcoming album is Rager Boy, the follow-up to 2019’s Heart Full of Rage. The artist says that he’s grown organically in the two years between.

“Honestly, I always evolved with every song I do,” he says. “I always want to make a new sound and something different that the people will relate to. It’s just growth – you’ve always got to have that growth no matter what. You’re always going to see growth. You’re changing every day and growing up every day. It’s great to see – Heart Full of Rage wasn’t how Rager Boy is with all the features I have and all the different sounds. Me pushing myself to do other music that people weren’t expecting me to do. It’s cool.”

The thread between the two albums would appear to be “rage,” but even there, nothing is quite what it seems.

“It’s an acronym for Release All Good Energy,” Yaweh says. “It’s not saying go and destroy stuff and be a hooligan. It’s about, let out all that emotion and all that energy in the music. Giving positive energy back and motivating people.”

The themes on Rager Boy, Yaweh says, are of relationships and life observations.

He’s not alone; besides working closely with the aforementioned Post Malone, Yaweh has collaborated with artists as prestigious as DaBaby (on “Stuntin’ On You”) and Wiz Khalifa (on “All the Smoke”).

“Wiz is my idol,” he says. “His blogs helped me want to become an artist and do things that you have to do to get to the top. He showed us on those YouTube videos. It’s just crazy, to have him as a friend. Me being on his album and everything else, it’s just so cool. DaBaby is just dope. You’ve got a number one artist and he’s a kind spirit. His music is amazing so it’s so cool to work with other stars and peers.”

Those two, plus “Tommy Lee” (with Post Malone), are the most recent singles and Yaweh says that they’re fairly representative of the album.

“I just wanted to give people good music to have fun, especially during the pandemic,” he says. “Just to have some type of motivation to get up in the morning and even go out here. I wanted to give people fun music, and I felt like it was good music for people’s souls and spirits. We have music on the album that anyone can relate to. Like I said, break-ups and stuff.”

The album has kept him busy throughout the lockdown, and for that he says that he feels blessed.

“Unfortunately, we’re stuck but I’m blessed to be able to still work with the team,” he says. “Have these records go crazy. So honestly, it’s a blessing and a curse at the same time. We want to be outside with the fans and be able to touch the fans. Give them our music. Right now, we have to do it through the internet. So we’re just working, staying motivated, and we’re going to keep this thing going.”

As for 2021, everything is up in the air but Yaweh has some plans.

“This album is my main focus,” he says. “We want to connect to the world, and Rager Boy is going to be worldwide. It’s a movement, and this is our lifestyle.”

Tyla Yaweh’s “All the Smoke” single is out now. The Rager Boy album is out early winter.