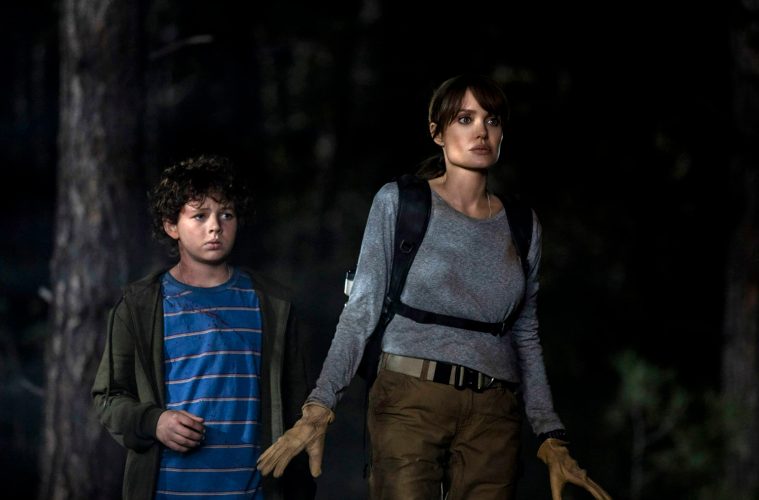 Taylor Sheridan has made an indelible career out of reinventing the Western. Though his stories take place in the modern era, his protagonists tend to possess familiar tropes of the classic Western hero. From Emily Blunt’s idealistic FBI Agent in Sicario to Chris Pine’s desperate bank-robber in Hell or High Water (both of which were penned by Sheridan), to Jeremy Renner’s dutiful hunter in Sheridan’s directorial debut Wind River, his protagonists are principled, dedicated –even if they’re criminals– and live in a bubble often threatened by an outside source. These qualities can also be seen in Sheridan’s new series Yellowstone, which is basically a Western with cars and cell phones.

Now we have Those Who Wish Me Dead starring Angelina Jolie as a Montana smokejumper who must protect a teenager from two hired killers. Sheridan directs with a deft hand, and shares writing credits with Charles Leavitt and Michaela Koryta, who wrote the novel. As a result, this new venture has plenty of the filmmaker’s recognizable grit, but only shades of his rich characterization.

What should make a new Sheridan project so refreshing, especially during this CGI-laden era, is the time he tends to take to develop and deepen his characters, even as he drops them in tense situations. Like a modern-day Sydney Pollock –a director who paid as much attention to fleshing out his player’s perspectives as he did to political and social mores in movies like Three Days of the Condor and Jeremiah Johnson– Sheridan is known for utilizing internal conflict as the driving force behind the narrative. It’s a tenuous balance his work usually thrives on.

There are shades of that alchemy here, but the film wants to have it both ways. There are intense action sequences, all of which are expertly choreographed (Sheridan has become a damn good action director), but the contemplative tone suggests a requisite understanding of his characters’ complexities. And it’s lacking here.

With a running time of 100-minutes, the movie simply cannot encompass the heavy drama, the special effects and the shootouts without coming off slightly cliched when it counts.. There are simply too many characters and plotlines. Still, that doesn’t detract from an engaging story which features great performances by supporting actors like Jon Bernthal and Medina Senghore. Even Tyler Perry makes an appearance as the assassins’ boss.

Ultimately, this is Jolie’s movie though, and she brings benevolence and compassion to the role of a tough, independent woman who suddenly finds herself not only protecting a child but coming to terms with her suppressed guilt. For the past ten years, Jolie has primarily been playing action heros (Salt) or mystical creatures (Maleficent); we haven’t seen her explore such multifaceted terrain since 2008’s Changeling.

Everyone brings their own distinctive textures to the screen and to Sheridan’s signature Americana wit. But the film needs a motivational focal point to truly smolder.  It comes close, but ultimately gets smothered by all the smoke and fiery disaster.

Those Who Wish Me Dead is in select theaters and on HBO Max now.