The Mitchells vs. The Machines – An Animation Marvel and a Heck of a Madcap Ride – 洛杉矶周报 – 亚洲版 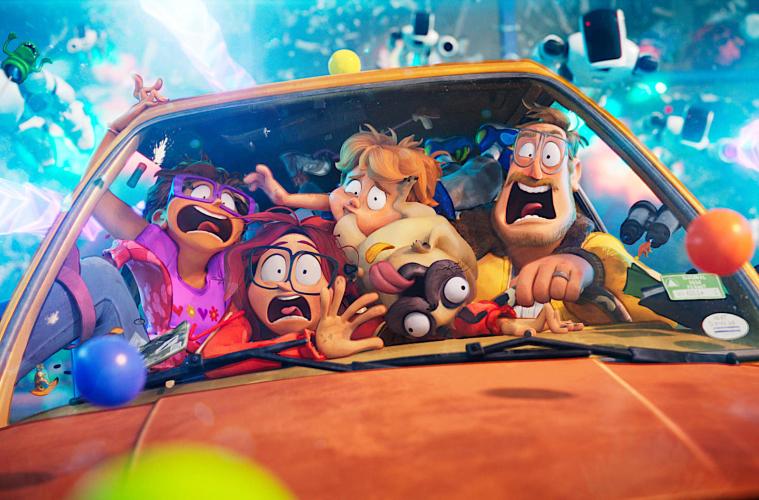 The Mitchells vs. The Machines – An Animation Marvel and a Heck of a Madcap Ride

Asher Luberto5月 7, 2021
The Mitchells vs. The Machines is the textbook definition of wacky hijinks, and it might be the best animated film you’ll see this year. The latest from Phil Lord and Christopher Miller – written by Miller, Jeff Rowe and Mike Rianda – is somehow even wackier than the filmmakers’ previous works (The Lego Movie, Spider-Man: Into The Spider-Verse). But what else could one possibly expect from a movie where a family of weirdos take on a legion of robots?

The movie is whimsical and wild in all the ways it should be. The directors throw twenty different genres into a blender, making for a thematically delicious, multi-textured and manic mix that works. They’ve got half of Hollywood in the picture, and you can bet they’re going to give every single actor a moment to shine. It’s a colorful, cuckoo-crazy, surreptitiously creative family adventure and one that you can’t take your eyes off for fear of missing the next madcap gag.

But it’s not all fun and games. The story centers on Katie Mitchell (Abbi Jacobson), a teenager who is ready to fly the coop. She clashes with her nature-obsessed father, Rick (Danny McBride), who pitches Katie a last-minute road trip to college with Linda (Maya Rudolph), Katie’s over-protective mother; Aaron (Rianda), Katie’s dinosaur-obsessed brother; and Mochi, their dog that drools all over the place. Somewhere along the way, robots take over the planet, an iPhone (Olivia Coleman) takes over the robots and an army of Furbies take over a shopping mall.

Does it all make sense? Heck no. But it doesn’t have to when the script is packed with so many hilarious moments (a run-on about our cellphone addicted kids is particularly great). The breathtaking visual style mixes 2D and 3D animation, doodles and photo-realistic robots, all of which sees Lord and Miller driving in the same lane as Spiderverse and The Lego Movie, just with bigger, better and more emotional results. Although it’s wackier than anything else out there (including Disney fare), you’ll learn to embrace it all the same way The Mitchells learn to embrace each other: with an open mind, loving heart and the ability to laugh out loud at the absurdities of life.