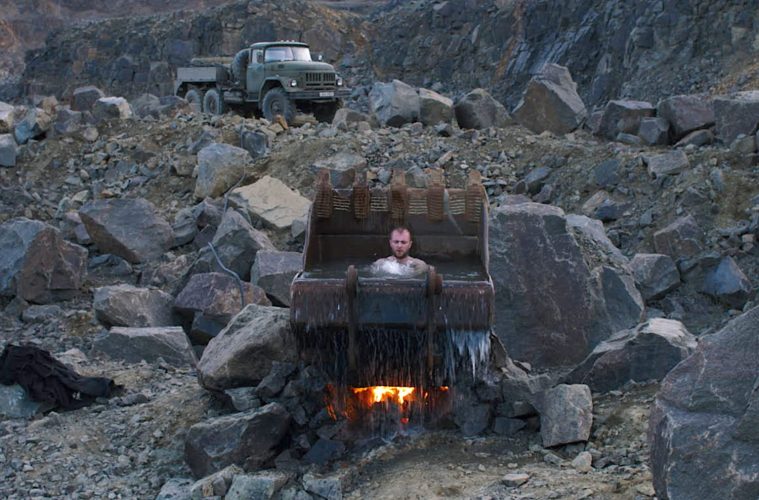 Asher Luberto2月 4, 2021
It wouldn’t be appropriate to call Atlantis a slow-burn horror movie, as this chilly, winter-set film is more like a slow-freeze. It gradually creeps in, locking you into a sub-zero nightmare for which there is no escape.

Atlantis is the second feature from Ukranian director Valentyn Vasyanovych, who broke out in 2018 with Black Level. This time he pens his own script, which explores the casualties of war, loss, trauma, capitalism and PTSD.

In the film, Sergiy (Andriy Rymaruk) and Ivan (Vasyl Antoniak) are ex-soldiers who work in a steel factory after the Russo-Ukraine war. They live in a city that is extremely cold and reeks of death, decimated by a battle they thought would bring change but instead has left them broke and embittered.

Sergiy finds a gig driving a water truck to once-occupied, now-inhospitable zones marked by shallow graves, pollution, abandoned factories and long, wintry silences. On one of his drives through “the zone,” he meets Katya (Liudmyla Bileka), a volunteer who digs up bodies and identifies them. She’s in charge of returning the soldiers to their families, along with braving some of the most rigorous, weather-beaten landscapes this side of The Road.

While Atlantis flirts with themes and images of post-apocalyptic horror, there’s no zombies, ghosts, or rival gangs. Vasyanovych builds an eerie and oppressive atmosphere with his cinematography, shooting on location in Eastern Ukraine. He films the action in long takes with a mostly static camera, creating a sense of people stuck in place, or revealing a symbolic element in the production design (like the shredded wallpaper, a reminder of Sergiy’s corroding sense of self).

Vasyanovych also shot Myroslav Slaboshpytsky’s 2014 crime drama The Tribe–a myriad of long, single-camera shots–so it’s no surprise that his use of lengthy takes here is just as masterful. Many of the shots are truly mesmerizing: a factory spouting blue flames and smoke into the night; armored trucks running over squishy mud, combat boots trampling through rain and mire; and, most audacious for a movie about the aftermath of war, an overhead shot of a snowy graveyard, where Sergiy and Katya find love in a world bereft of hope.

Rooted in the world we know, Atlantis terrifies because it is all too realistic. There’s no need for anything apocalyptic when reality can be this sad, this spare, this tragic. Dazzling and chilling at the same time, Vasyanovych’s film follows the consequences of war to their cold, bitter ends.