Who Will Be The Next Generation Of Chefs? We Found Them At The Little Kitchen Academy – 洛杉矶周报 – 亚洲版 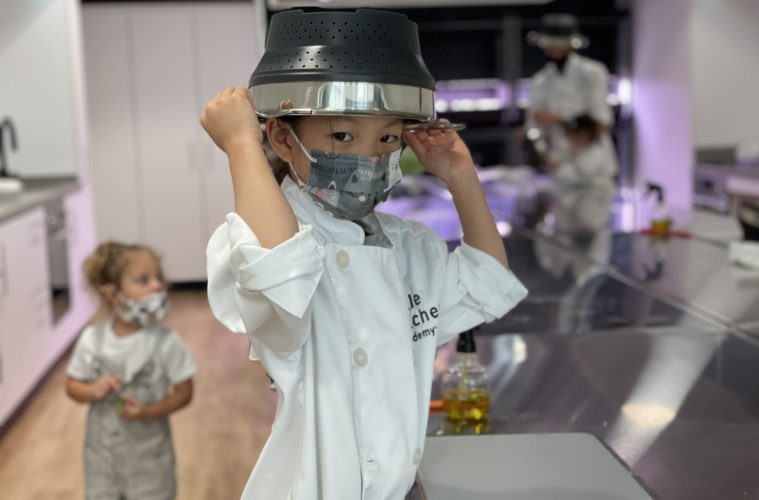 Who Will Be The Next Generation Of Chefs? We Found Them At The Little Kitchen Academy

Ten focused three- to five-year-olds are making Monet-inspired garden focaccia, washing and prepping produce and cleaning up after themselves during a two-hour cooking session. Once the kitchen is spotless and their yeasty creations have cooled off, they sit down at a communal table made from more than 33,000 recycled chopsticks from L.A. restaurants to discuss vegetables and how dough rises. This is the Little Kitchen Academy.

The first-of-its-kind, Montessori-inspired cooking academy for kids ages three through teen opened its first U.S. location at the Westfield Century City open-air mall this week. The quickly growing concept was founded by longtime Montessori director and trained chef Felicity Curin and her husband Brian. LKA Century City will be the fourth location, with the first two franchise locations having opened in July in Canada. The academy plans to open 423 locations worldwide by the end of 2025. Iron Chef and mother of six Cat Cora heads up recipe development and is the brand’s key advisor.

Instructors show the students how to safely use tools, but step back to closely observe the independent work, only stepping in when deemed appropriate. The hands-off teaching approach, which was developed by Italian physician Maria Montessori more than 100 years ago, enables students to learn at their own pace and develop practical life skills that foster independence, confidence and socialization.

The academy empowers students to make better food choices, apply age-appropriate math and science skills in real-world settings, and embrace practices such as recycling and composting. The little tots stand on step stools, measure their own ingredients with specially designed measuring cups that help them learn fractions by immersion and clean up their own spills. And yes, they use knives.

“I love the idea of empowering children to become confident learners and the beautiful organization and passion of productivity in the kitchen is the place for that,” Curin, a mother of three, tells L.A. Weekly. “The first three years of what they learn in primary school, they’re learning here. They’re learning patterns and shapes and how to listen to the instructor.  Maria Montessori realized that children have to be respected and empowered in order to develop the confidence to make good choices later in life.”

“Parents are so busy these days and some of them don’t know how to cook and others don’t want their kitchen messed up,” says Curin. “The secret here is that the children have to clean up and it turns out they love to do it. They want to mix their own ingredients, crack their own eggs and chop their own vegetables. Kids want to do it themselves, they don’t want to have it done for them.”

Oh yes, the subject of knives. It all starts with a wooden chopper for the three, four and five years olds made from Canadian maple by people out of work trying to get back into the workforce. The students are carefully taught to hold it with the exact same grip as a chef knife that they will end up using later. Onions will be cut into smaller pieces for the little ones in the beginning. They move on to the plastic serrated knife as their skills improve, which still employs the same grip.

“They learn how to position their fingers, hold the knife correctly and safety skills all at the same time,” says Cora as she catches herself and holds herself back from the instinctive reaction to help a junior chef pick up a spill of mixing bowls.

“They graduate as their cooking skills advance and it’s very subtle,” says the Iron Chef. “At Little Kitchen Academy it’s not a competition, it’s about being competent and learning knife skills. It’s not about keeping an eye on what your neighbor is doing. When we see they’re ready to move up we casually slip a new knife in their hand without even missing a beat or drawing any attention to it. It’s about giving them this empowerment in a very discreet way where they feel it inside without being threatening to anyone else. They don’t need the sticker or the trophy, the confidence lasts so much longer. There’s no big celebration. It’s the opposite of what we see in traditional learning.”

Seasonal sessions run year-round and are organized by age group (ages 3-5, 6-8, 9-12, and 13+ years old). Students experience a three-hour class once a week during the school year or over five consecutive days during summer, winter and spring breaks. Each week, students learn how to make healthy and seasonal meals from scratch to consumption, while experimenting with math and science concepts, working on reading skills, and polishing up on table manners by sharing meals. Sessions are limited to 10 students and are overseen by three instructors. All students are welcome in the fully inclusive program, including those with learning or other disabilities. The program, which is nut, meat, poultry and seafood free, also can accommodate those with gluten, dairy or other allergies.

“With the older students, we talk about how to buy a sweet potato and what a sweet potato is,” says Curin at the chopstick table designed by Chop Value in Los Feliz. “What’s in it? How much does it cost and how do you make it? Right now those kids just hop on to DoorDash and skip doing the dishes and are hooked on these instant food apps delivering saturated fat and oversalted meals to our homes at 11 o’clock at night. That has to stop and we need to teach them that a jar of salsa and a sweet potato can be breakfast, lunch and dinner.”

“At the end of every session, each child gets a token which represents a dollar from their registration and we give them age-appropriate information about the three jars and the foundations they represent and they can make a choice of where they want to make their donation,” Curin explains. “They’re all color-coded according to age group. They have such incredible emotion behind their choices. Sometimes it boils down to one jar not having as many tokens. Yesterday they chose Chefs for Humanity because they themselves are chefs now. They’re learning that they can help and make a difference. Most schools will choose a charity for everyone to donate to, why not let the kids pick? By the end of 2025, we expect to reach more than $1 million in donations from the kids.”

Cora is the president and founder of Chefs for Humanity, an organization that originated in response to the 2004 tsunami disaster. Modeled after Doctors Without Borders, the nonprofit gathers the culinary community together to raise funds and provide resources for emergency, educational and hunger-related causes. Other participating charities include the Global FoodBanking Network and PHIT America

So who are these chefs of tomorrow?

“They’re going to be everything,” says Curin. “This generation in front of us is going to have five or six careers and be vibrant and inspired. They’re going to change the world because they will be empowered to be independent and confident. And they can make focaccia.”

“They don’t need the sticker or the trophy, the confidence lasts so much longer,” says chef Cat Cora (Michele Stueven)