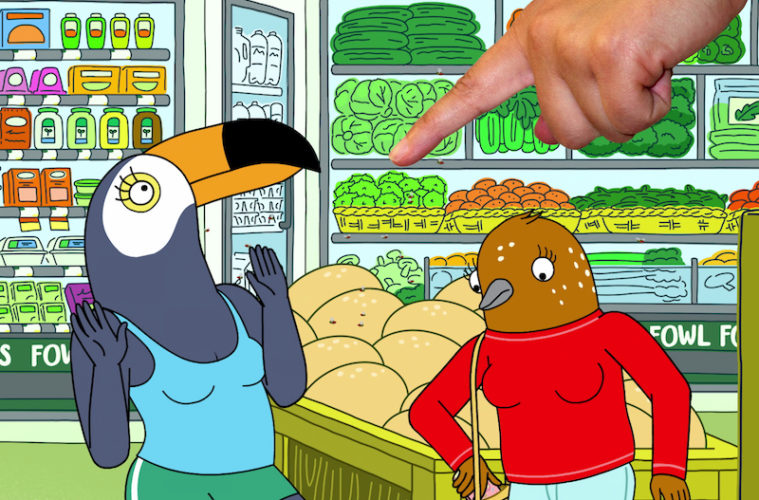 Which Toons are Tops? Reviews of new Rick and Morty, Tuca & Bertie, M.O.D.O.K. and More


This week, animated shows of all shapes and sizes are given the UnBinged treatment as funny animal cartoons, stop-motion megalomaniacs, sci-fi series and curmudgeon scientists are up for review.

Rick Sanchez and his gullible grandson Morty have returned to Comedy Central for a fifth season of intergalactic fist fights, irreverent belly laughs, and pointed jabs at society. And though it all seems business as usual, there is something amiss in the Smith household, but not necessarily in a bad way.

For young Morty, the thrill is gone. He’s no longer a slack-jawed naive kid who haplessly follows his grandpa from planet to planet. He’s a bit older, a bit wiser, and a bit more bitter about the situations Rick continues to put him in. In fact, all of the Smiths seem to have reached the end of their rope, acting out in ways that can only result in turmoil.

It is this character evolution that makes each season stand out, creating new dynamics with every episode. The character continuity gives depth to the Smiths as they remember each and every bad experience, forcing them to change, sometimes into the worst versions of themselves.

And that is what elevates the show and helps Rick and Morty escape the drudgery that seems to have caught hold of other long-running animated adventures such as Family Guy and The Simpsons. Yes, Rick is still an old, hardened curmudgeon, but Morty isn’t the passive schlep he used to be. He’s learned, he’s matured, and he’s more tired of Rick’s bullshit than ever, even if fans are not.

Thanks to the guidance of creators Dan Harmon and Justin Roiland, the fifth season of Rick and Morty continues to develop while it blows our minds with new universes, timelines and TV-MA situations, making it more than just a sci-fi toon with the occasional dick joke. The characters and their degeneration fuels the twisted humor of the show. That said, the dick jokes are pretty funny, too.

Two thirtysomething best birdie buddies try to navigate their way through the big city, looking for career success, romance, and the answers to life,  all the while thwarted by existential dread. And thus you have Tuca & Bertie, the somewhat overlooked Adult Swim toon about two whimsical feathered friends who might be made of ink, but feel more real than most live-action characters.

At the center of the show is an anxiety-ridden song thrush named Bertie (Ali Wong) and her brash and brassy toucan bestie Tuca (Tiffany Haddish). The two couldn’t be more different, but they are each other’s biggest cheerleaders and at times, biggest obstacles.

When watching the show, it is hard not to draw comparisons to BoJack Horseman, as both use anthropomorphic animals to address serious issues such as abuse and childhood trauma. They also share a similar look (creator Lisa Hanawalt was the production designer for Bojack). But Tuca & Bertie employs a more farcical tone, making full use of its animated surroundings to get a little wacky and give the audience a chance to laugh before it piles on the anguish.

In the first season, Bertie’s workplace maltreatment and Tuca’s inability to connect with others were major plot points. In season two, those themes persist as Bertie’s panic attacks and low self-esteem threaten her relationships and development, while Tuca’s dependence on Bertie and recent sobriety cause her social anxiety.

In the end, Tuca & Bertie is bigger than the cartoon category it is forced to reside in. It’s an exploration of complex emotions and the problems one faces if past issues are not resolved, making it an exceptional animated offering and an example of what can be achieved when great writing and vision is given the opportunity to flourish. Now if we can only get more folks on board.

The first season of Love, Death & Robots was a rollercoaster ride. Featuring extraordinary feats in animation, the series offered original and sometimes captivating sci-fi stories of romance, violence, and of course, robots. And though the series was somewhat uneven in its storytelling, it was amusing nonetheless. With  only eight episodes, the second season is no different, a grab bag of tales, tones, and topics to placate any geek in need of a sci-fi fix.

Created by Tim Miller (Deadpool), Love, Death & Robots is a series of “what if” scenarios pushed to the limit. What if people stopped dying? What if Santa was a flesh-eating monster with a taste for naughty children? What if giants were real and occasionally washed up on the local beach?

While the second season shares similar issues of irregular narratives that plagued the first season, almost every episode raises the bar in animation to an astounding level of achievement. Stories such as “The Drowned Giant,” a bittersweet tale that reflects the dregs of society within a preposterous situation, can be considered a benchmark, while other stories range from silly fun (“All Through the House”) to completely forgettable (“Ice”).

On the bright side, at a brisk average of 10 minutes per episode, it’s easy to just wait a beat and move on to the next possible winner or loser. As a whole, Love, Death, & Robots is an array of valleys and peaks that’s nonetheless an entertaining contribution to the sci-fi genre that’s worth each story’s runtime, especially for animation fans.