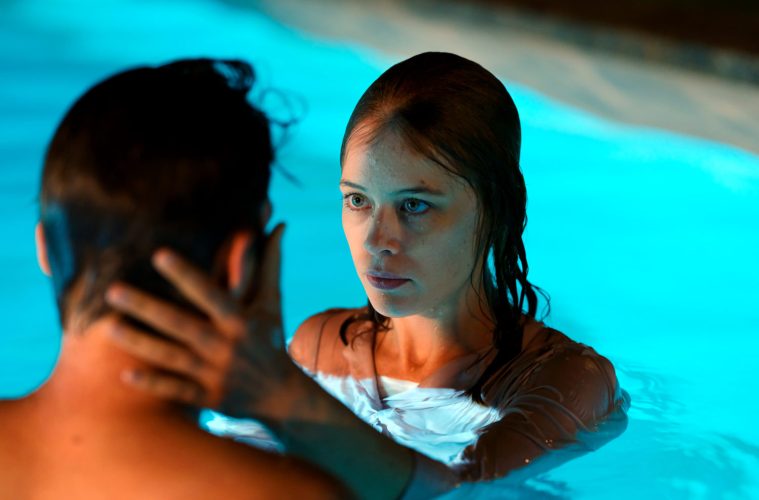 In the opening scene of Undine, a woman threatens to kill her lover if he leaves her. Thanks to the intensity of her delivery, we believe it. The woman is played by Paula Beer, who won the Silver Bear for Best Actress at last year’s Berlin International Film Festival for the role. Christian Petzold’s ninth theatrical feature casts her as a present-day embodiment of an ancient water spirit adrift in a cold, modern city. The premise is reminiscent of Curtis Harrington’s Night Tide, which was itself a loose reworking of Val Lewton’s production of Cat People. Under Petzold’s calm mastery, the mythical elements are kept close to the vest, and the film never ventures too far into supernatural territory. The result is a peculiar love story that maintains a firm grip even as its meanings remain elusive.

The titular protagonist is a freelance historian specializing in urban architecture and design. Her day job at a state museum includes delivering lectures to guests with the aid of an elaborate model of Berlin, a city built on a swamp. After her boyfriend, Johannes (Jacob Matschenz), breaks up with her, she rebounds with a shy, handsome man named Christoph (Franz Rogowski), who works as an industrial diver repairing underwater turbines. Their “meet cute” moment involves a restaurant’s aquarium tank that bursts, drenching them from head to toe.

The sweet romance that follows is complicated by ominous harbingers of danger. She nearly drowns, but is revived by Christoph, who pumps her chest to the beat of the Bee Gees’ “Stayin’ Alive.” The reappearance of Johannes triggers Christoph’s jealousy, leading to a tragic series of events. And then a miracle occurs.

Petzold, who trained as a literary scholar before becoming one of Germany’s leading filmmakers, is an artist whose subdued, suspenseful, impeccably crafted films run deep with the human desire for love and freedom. Here, the transposition of ancient myth onto a present-day narrative allows him the opportunity to explore the dilemma of a woman whose desire to love—and be loved—dooms her to a watery fate. Situating this contemporary fairy tale against the backdrop of a chilly, industrialized landscape subtly comments on how social planning has destroyed the collective imagination that once sustained German society. This is, after all, the culture that produced Goethe, E.T.A. Hoffmann, and the Brothers Grimm, to say nothing of Friedrich de la Motte Fouqué, whose 1811 novella provides the film its name and subject matter.

Undine is deliberately paced, which is a polite way of saying that it’s slow. Petzold’s predilection for teasing the audience with enigmas may annoy viewers looking for a firmer genre commitment. But it casts a delicate spell on the strength of its elegant, understated style. Working with his trusted cinematographer Hans Fromm in blue-green tones, Petzold makes deft use of subjective camera angles to suggest alternative points of view, including a final shot that strikes a perfect note of ambiguity. The recurring use of a haunting Bach concerto completes the illusion. The two leads, who appeared together in Petzold’s previous film, Transit, make an unusual, appealing couple. Beer’s red hair and limpid eyes suggest a wild creature held at bay. Rogowski, an experienced dancer with a cleft-lip scar and distinctive lisp, commands sympathy in his usual effortless way. Iranian actress-director Maryam Zaree is also very fine as Christoph’s diving partner.

These disparate ingredients make Undine an unlikely addition to a growing canon of mermaid cinema, whose recent entries include The Lighthouse and The Lure. Petzold envisioned it as the first of a trilogy of elemental romances. The second, something having to do with fire, will kick into high gear when COVID production protocols are relaxed. We hope it’s a short wait.