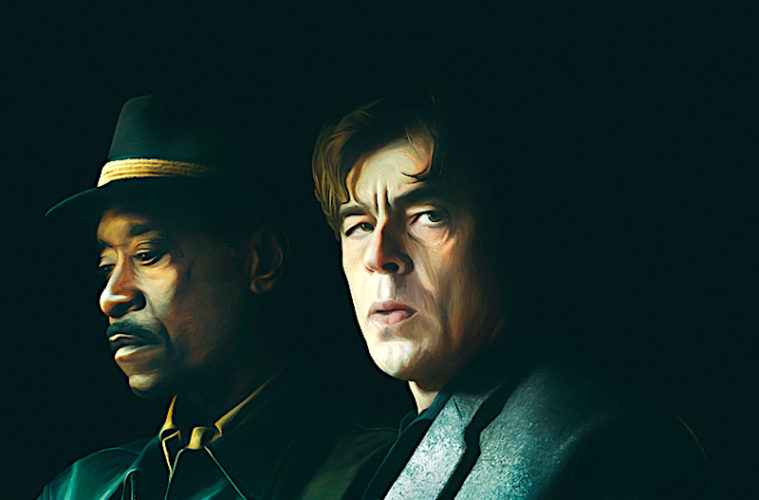 One can make the argument that Steven Soderbergh is the David Bowie, or more appropriately, the Scott Walker, of film directors. Much like those musical geniuses, he isn’t interested in financial reward or notoriety, as much as subverting genres, stretching the medium to its brink and going to extreme lengths to never repeat himself. Sometimes he transports you, but at other times, you shake your head in confusion at his choices. Such is the reaction to a real artist.

With Sex, Lies and Videotape the director essentially birthed the 90’s indie scene, and he continually defied expectation with his surrealist films (The Girlfriend Experience), venerated Oscar fare (Erin Brockovich, Traffic), box-office hits (the Ocean Eleven series, Magic Mike) and inimitable takes on the crime film (Out of Sight, The Limey). Soderbergh’s latest, No Sudden Move (which just premiered on HBO Max July 1st), takes its cues from the latter category by delving so deeply into noir, you almost drown under its current. Thankfully, we get to catch our breath as he also implements dark humor, social commentary and a cast of characters that are so clumsy and desperate you can’t help but invest in the journey.

Set in 1950’s Detroit, no time is wasted plunging into a broken capitalist society where urban criminals rub elbows with Ozzie and Harriet-esque families working for the automobile industry. The enigmatic Don Cheadle plays Curt, who’s just been released from prison and is hired for a shady job with two other criminals – Ronald (Benicio Del Toro) and an irritable Charley (a hilarious Kieran Culkin). Their recruiter, Joe (Brendan Fraser), orders them to take an accountant, Matt (David Harbour) and his family hostage, so they can steal a top-secret file from his office. It turns out that kidnapping a family is merely a means for Curt and Ronald to squeeze more money from other corrupt businessmen.

Soon, these low-level criminals fall headlong into a rabbit hole of crooked automobile executives, cheating spouses, institutional racism and mafia paybacks. The file itself was merely a MacGuffin, interweaving a cast of characters including a dubious detective (Jon Hamm), beautiful and ambitious dames (Julie Fox, Frankie Shaw) and ruthless crime bosses (Ray Liotta, Bill Duke). Like many classic noir tales, the story is less concerned with plausibility or clarity, as it is rhythmic cadence of its telling. If noir is a swing dance of egos and hidden motives, No Sudden Move feels like a frenetic ballroom filled with greedy sociopaths. Still, underneath the comic frenzy there is a commentary about the privileged puppet masters in this country.

Soderbergh keeps the pace moving at a breakneck speed with a self-assured, laidback style. Working from a script by Ed Solomon (Men in Black) and propelled by a jazz-inspired score by David Holmes, he jumps from character to character without hamstringing his audience and it’s a feat only a director of his caliber could accomplish. He even utilizes older camera lenses to capture the era. Every scene is awash in thick grays and greens, giving the impression that the  ‘50s was a darker era than usually portrayed. Unfortunately, he takes this experimentation a little too far by implementing a fisheye perspective in too many scenes, an unnecessary camera trick that cheapens the cinematography and distracts the audience.

Also, the story is so convoluted and intricate, at times it feels like an albatross threatening to sink the whole movie. Soderbergh’s masterful balance of dark humor and drama, not to mention some great performances, helps the narrative rise above these shortcomings, at least. There’s nothing especially profound about No Sudden Move but it does remind you that criminality is pretty ugly on both sides of the tracks, but at least it’s more honest on the street level.