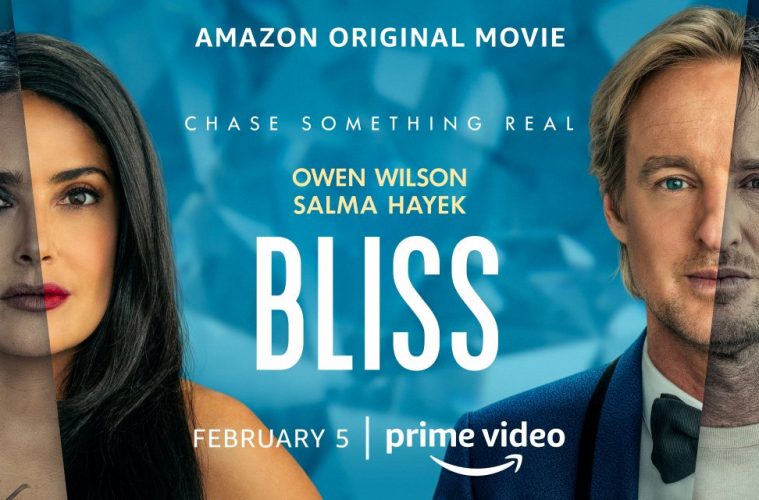 Lina Lecaro2月 10, 2021
In Bliss, Salma Hayek’s new movie, the actress plays a mysterious woman who comes into Owen Wilson’s life and shows him that everything he thought was real, wasn’t. Mike Cahill’s mind-bending new film poses a lot of questions about reality, manipulation and the power of love, and a lot of it is quite dark. But Hayek, who has been acting for three decades now, brings her zesty charisma and joy to the role, which requires a duel take on the character, living in two alternate dimensions.

The Veracruz, Mexican actress, born Salma Valgarma Hayek Jiménez, made her mark first in telenovelas in her homeland, then moved to L.A. and won memorable parts in American films such as Robert Rodriguez’s Mariachi Trilogy and in From Dush Til Dawn (Rodriguez’s film written by Quentin Tarantino). Some hit comedies followed, including Fools Rush In, Wild Wild West and Dogma, which led her to producing and a career highlight on both sides of the camera, Frida, her loving cinematic portrait of Frida Kahlo, for which she earned an Oscar nomination.

She’s stayed busy ever since, both as an actress and a producer. We spoke with the passionate star by Zoom interview last week, talking about the new film, what she has coming up (big stuff!), and her enduring ability to stay hot in Hollywood while representing women over 50 and Latinas everywhere.

SALMA HAYEK: Were you interested in topics and theories about alternate reality before making this movie?

LA WEEKLY: I was always into in quantum physics and string theory. I had some knowledge about that. I was not interested in the idea of living in a simulation, but once I started researching, it was mind blowing how much was there. And kind of scary… But the movie works in two main ways. Two different people can watch the movie and interpret it completely differently.

Besides the alternate reality story, the other choice would be that they’re drug addicts, and they use substances to create their own reality where they can escape from the mess of their lives.  I decided to choose that take as an actress. Of course my character doesn’t know that, and in less than a week of shooting, the character took over me and then I said, ‘No, no, wait, this is real. This is actually happening.’

So you changed your perspective on the story?

Yes. I never thought of her as drug addict anymore. I thought about a scientist that lived in the bliss world and created a parallel world so that the bliss world could be appreciated. Because we had lost the appreciation. This is first time that I completely changed my take a character in a film and that’s been really helpful after the film too. I’ll tell you why…

When we came out of making the movie, we entered this parallel reality world where everything has changed and it’s hard to understand but most importantly, we don’t have to go to another dimension in this dimension to live in completely different realities. And it taught me not to judge them. I’m sure it’s happened to you. That somebody that you thought you knew all of sudden has a logic that makes no sense to you about certain things- like politics or where does the coronavirus come from? Or is the earth flat? Or even crazier things.

Like they can say to you we all have 6 fingers in each hand and you can say no, there’s only 5 (raises hand) I only see 5. But they go no, there’s 6! It’s a secret but the scientists have been proving it and I can show on the internet a hundred articles about it… I understand the world we’re living right now, that’s what it is right now.

It’s so true. This all makes the movie very relevant right now doesn’t it?

And if you think about it, when we went into quarantine, everybody created their own bliss world. Through technology, through social media, movies, television, video games, chats…  it was the escape. Everybody designed their own bliss world. Not to mention how it’s taught us appreciation for how it was before- going out with friends to have dinner, like not being afraid of the person walking next to you on the street because they don’t have their face covered. Or that somebody’s going to be upset with you because you do have your face covered. I miss the day when somebody sneezed and I could go to them and say politely, as my parents taught me, bless you without being afraid.

Let’s move on to your impact as a successful Latina actress. Representation is so important, but what I love about so many of your roles is that often your ethnicity is irrelevant to the character’s story, just like in real life.

This one particularly that true but not only my ethnicity but my age. How often do you see a Latina that is 54 on screen? The guys get away with it. But in sci fi especially the leads not so much. And Mike [Cahill, the director] didn’t think about that at all. Either one of them. So it’s not that I’m trying to look for roles that don’t play up my ethnicity, but I do try to look for filmmakers that see beyond my age ethnicity or my sex.

Hayek in FROM DUSK TIL DAWN (courtesy Dimension Films), in DESPERADO (courtesy Columbia Pictures) and in FRIDA (courtesy Miramax)

You are beautiful and when you were younger you played your share of sexy or femme fatale roles… even now you can play those. But at this point in your career are you looking for other kinds of characters to play? You play a doctor in this one which is different and great. What made decide to do this film?

I was a fan of the director. I think he’s very interesting, that’s number one. Also this role didn’t require me to look beautiful. I have a huge belly you can see it in some scenes.

I think you look really great in both realities. Even as the homeless lady. You look very bohemian with your braids and styling.

I was not required to be a certain weight, a certain look, age or a certain ethnicity for either. He [Cahill] saw something in me and something that he felt about me and it had nothing to do with any of that.

You’ve always been such a versatile actress. My favorite of your films are Frida, Desparado and From Dusk Til Dawn. I also like the Grown-Ups movies with Adam Sandler. You’re really great at comedy. Do you have a preference between comedy and more serious roles like this?

I love comedy. But I have a preference for good writing. Then it doesn’t matter what it is. If there’s good writing and a good director… Comedy that’s badly well written with hard to pull off jokes, is a struggle.

Is comedy harder than drama?

If it’s badly written yeah. But for me it’s not harder, for me it’s so much fun and easy. And I love improvising. And you know it’s very cool because his movie is serious, but my relationship with Owen [Wilson] was very light and beautiful because he’s also very funny. We really had fun doing this.

So you finished the film before the pandemic really hit but now that we are in it, what’s you life been like? I know you’re a mother and you always have projects happening. How are you managing?

This has been a good opportunity to have more time to be a mother. I do have a production company and we’ve had to shoot things during COVID and shooting under COVID circumstances has not been fun as a producer. I still work regular hours and I work a lot out of my house. It’s been a lovely to time to just be really close to my family and my animals who are the happiest creatures about this quarantine.

Working on anything else coming up?
Yes. Coming this Summer I have the sequel to the The Hitmans’s Bodyguard. And guess what? I had a small part in the first one and now I have a lead with Ryan Reynolds and Samuel Jackson.

Wow! I loved you in that one. Very badass and quite a cast.
I’m 54 and have a lead in an action film. And I do my own stunts! And then at the end of the year I’m going to be a superhero in a Marvel movie called The Eternals. A Latina superhero at my age!

That is amazing. As a Latina right behind you in age, I must say you are such an inspiration for all of us.

Thank you. Power to Latinas and power to our generation!