Asher Luberto12月 2, 2020
Mary Anning’s soul is as calloused as her cracked, weather-beaten hands. She has spent most her life along the coast of Lyme, England, unearthing fossils from the rocky shore and surrounding cliffs. Her work is displayed at the British museum, yet she isn’t allowed to socialize with the men at the Geological Society of London. Then Charlotte Murchison arrives at Mary’s door, and she finds something far greater than shells and rocks. She finds hope.

Francis Lee’s Ammonite follows a love affair between two women who were real-life figures, excavating their lives like a paleontologist. He uses 1840’s England (his environment) as a primer to determine how they lived, how they dressed, what they ate, what they did to pass the time. What was life like for two lesbians in 1840? It’s a question that Lee answers with startling specificity, bleak as the answer may be.

The movie begins with Mary (Kate Winslet) living in isolation with a gravely ill mother (Gemma Jones), spending mornings on the beach and afternoons selling fossils to tourists for food money. She’s closed herself off from other locals, and though we don’t know exactly why, we know she’s emphatically, almost doggedly independent. That independence is tested when a geologist, Roderick Murchison (James Mcardle), appears with his wife, Charlotte (Saoirse Ronan), the latter traumatized by a miscarriage and the burdens of a boring husband.

When Roderick decides to travel alone, he pays Mary to care for Charlotte. Mary grudgingly accepts. She needs the money. But after she nurses Charlotte to health, a connection is made, and Lyme suddenly doesn’t feel so cold. 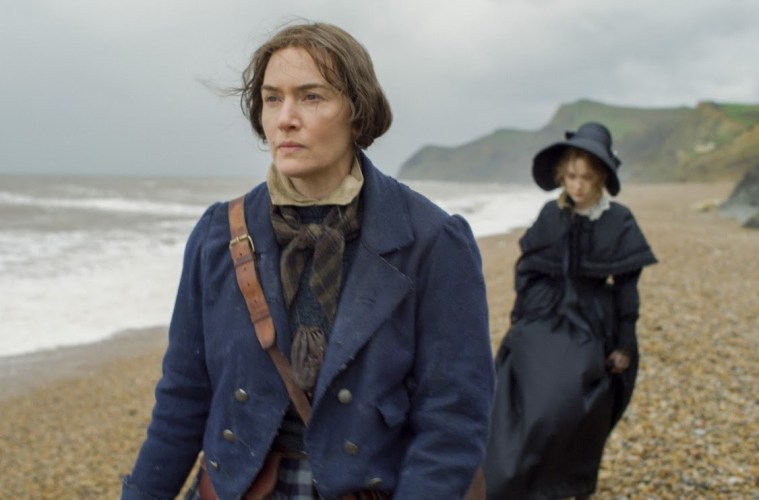 Lee’s film fits into a period piece formula, one of quaint villages, charming townsfolk and empty landscapes where lovers can frolic without fear of judgement. In fact, it’s a lot like Celine Sciamma’s Portrait of a Lady on Fire, but dark, and spare, in a way that feels entirely authentic. It’s a realistic spin on a type of film that’s usually not very realistic.

Shooting on location in Lyme and West Dorset, cinematographer Stephan Fontaine captures the ruggedness of the coastal landscape, and the film is a chilling visual feast. This world is brought to life by production designer Sarah Finlay, and the weather adds depth and nuance to the characters’ experience. A sunny day after weeks of rain tells us as much about the characters as their actions do.

There are a few twists and turns along the way, many of them easy to guess before they happen. You don’t have to have seen Portrait of a Lady on Fire, or Lee’s directorial debut, Gods Own Country, to know this ship is sailing toward tragedy. But Winslet’s intensely felt performance, along with the performance of Ronan, keeps us rapt. Watching this couple find hope, however brief, is discovery enough.