Review: Aaron Sorkin’s The Trial of the Chicago 7 Pops With Power of Protest – 洛杉矶周报 – 亚洲版 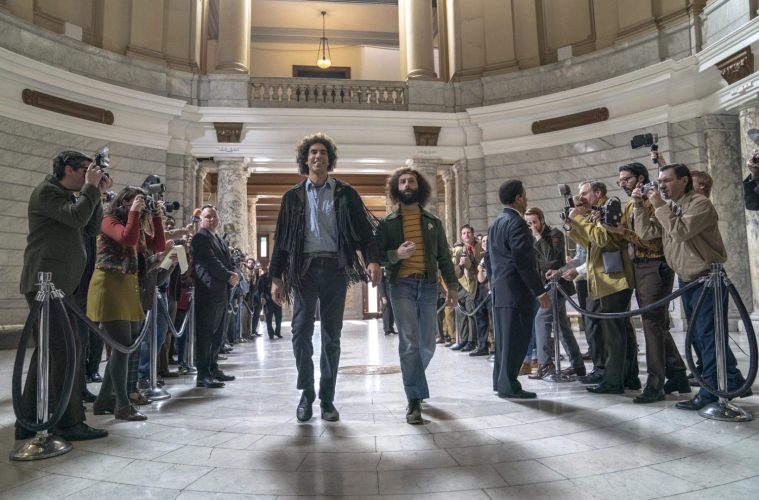 Review: Aaron Sorkin’s The Trial of the Chicago 7 Pops With Power of Protest

Asher Luberto10月 19, 2020
In one of his first lines in The Trial of the Chicago 7, former activist Tom Hayden (Eddie Redmayne) lays out his plan. “We are coming to Chicago peacefully,” he claims. “But whether we have permits or not, we’re coming.”

That’s the line walked in the film written and directed by Aaron Sorkin, which depicts the case that imprisoned eight anti-war protesters in 1969. This isn’t a revenge tale, or a comedy, or a drama, though sometimes it seems like it can be all of those things. But for the most part, this is something more stimulating and genre-defying: a legal procedural on how to stand up for what you believe.

This foot-stomping, fist-raising tale doesn’t ask you to love or even like the men at the center of the story, only to see them as humans fighting to be treated as such. The activists of the Chicago 7, who were charged in federal court for conspiracy, unlawful assembly, and more, relating to the violence surrounding the 1968 Democratic National Conventio, included a Dream Team of activists: Tom Hayden and Rennie Davis of the Students for a Democratic Society; Abbie Hoffman and Jerry Rubin of the Youth International Party; John Froines and Lee Weiner of the Independent Party; Bobby Seale of the Black Panthers; and David Dellinger, a pacifist who at 54, was the oldest in the group.

The trial for seven of them – Seale ended up being tried separately – started a year after the convention. It took months, a mistrial, 24 citations and hundreds of bystanders to render the whole thing a circus. Also, costumes. Just when you think things couldn’t get any crazier, Rubin and Hoffman dressed up as judges while on trial.

Because the trial works as both popcorn entertainment and cautionary tale, Sorkin’s second outing as director is a more taut and timely affair than his first, Molly’s Game, and he interweaves archival footage of Vietnam protests to create a visceral authenticity that’s reminiscent of the protests you see on the news today.

The courtroom stuff, however, is where he truly shines. Remember his snappy dialogue in The West Wing? How about in The Newsroom? Sorkin dials it up even more here, his speeches echoing off courtroom walls like thunder after lightning strikes. As always, he has a major ensemble to deliver those lines, including a trio of Brits leading the charge: Redmayne as Hayden, a clean-cut golden boy of the movement; Sacha Baron Cohen as hippie prankster Hoffman; and Mark Rylance as defense attorney William Kunstler. Factor in Jeremy Strong as Rubin, John Carroll Lynch as Dellinger, Frank Langella as Judge Hoffman, Michael Keaton as Ramsey Clarke, Joseph Gordon Levitt as chief prosecutor Richard Schultz, and Yahya Abdul-Mateen II as Seale, and you don’t know who to focus on.

In one of the film’s best sequences, Seale is taken out of the courtroom by police and returns handcuffed to his chair. While most directors would cut to a close-up, Sorkin pulls back to read the room. He wants us to see Judge Hoffman while keeping the Chicago seven in frame, a wide-shot used to showcase their composure. To see them transform from “hoodlums” into a source of power and strength, truly owning their identities is moving and inspiring.

With its inside-out format, The Trial of the Chicago 7 has the energy of a legal drama crossed with the urgency of a sociopolitical documentary. The bulk of the events happen in court, and when the story moves outside to cops and riots and tear gas, things take a perilous turn. In our current moment, The Trial of the Chicago 7 is less a chapter in history than a first draft still being written today, and Sorkin asks us all to take a stand for civil rights, even if it means taking the stand.