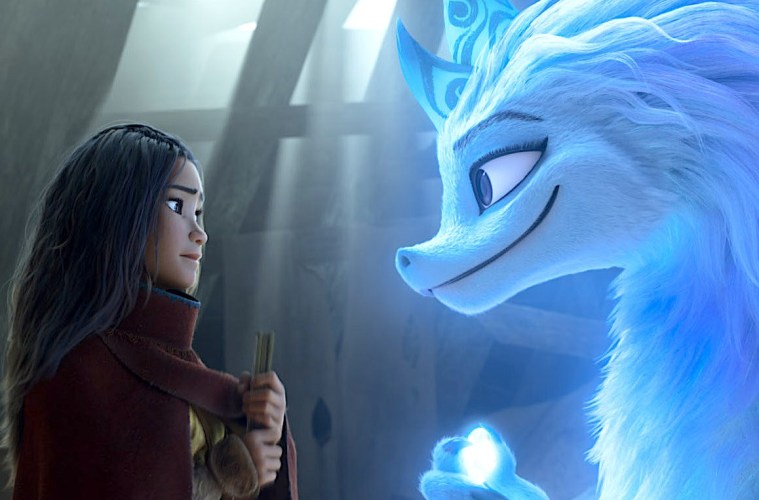 The movie was directed by Don Hall and Carlos Lopez Estrada, co-directed by Paul Briggs and John Ripa, and stars Kelly Marie Tran as the voice of Raya and Awkwafina as the voice of Sisu, the dragon. The voice cast also includes other iconic Asian stars in lead roles.

Available on Disney + and in select theaters Friday, the film is set to position Tran as a much needed role model on screen and off. With many Asian communities facing racism in 2021 due to the coronavirus and the historical lack of Asian representation in Hollywood,  the actress -whose parents were refugees from Vietnam and fled following the Vietnam War-  is not only stepping up to showcase her acting talents, but taking a stand against online bullying as well.

The Southern California native -who is best known for her role as Rebel fighter Rose Tico in the Star Wars films, The Last Jedi and The Rise of Skywalker- faced an inundation of racist and body shaming online attacks following her appearances in the blockbusters, and in 2018, she took a bold step by she deleting her Instagram bio and posts, leaving only the phrase: “Afraid, but doing it anyway.” These words echo the heart and soul of Raya and the Last Dragon’s themes of trust, forgiveness and resilience. We spoke with Tran about this and more in advance of her big Disney debut.

LA WEEKLY: How does it feel to voice Disney’s first Southeast Asian princess?

KELLY MARIE TRAN : It feels insane. I grew up really loving Disney animated movies and wishing to be part of them and wishing to exist in those magical worlds in which those characters inhabited, never knowing that it would ever become a reality. So, now to be here and to be part of this movie feels like a miracle. Yeah, it’s crazy.

Looking back to your experiences with bullying and racism when you were starring in Star Wars, how did you deal with that negativity? And do you feel differently about the reactions that you’ve gotten from Raya so far?

Yeah, I think that experience really taught me a lot. I think that now, looking back, I can honestly say that I’m really proud of the ways that I showed up for myself and that I took time away to really process what was happening and then to now be in a place where I really just look at all of that differently.

The wonderful thing is that there is sort of this celebration of being able to move on from that and then to be part of Raya, which feels like such a celebration of all the things I was told I shouldn’t celebrate. So, yeah, it feels a little bit like a rebellion in a beautiful way, to tie it all together.

What do you think Raya and the Last Dragon means for Asian representation in Hollywood, and are things changing?

I think it means a lot. I mean, I think if we just look at the cast of this movie and you have Gemma Chan, Awkwafina, Sandra Oh, Daniel Dae Kim, Benedict Wong, the list just goes on and on. All of these people who in their own right are making breaking barriers every day just by existing and working in this world that historically has not made a lot of room for people of Asian descent

So, yeah, this movie means a lot to me. I hope that people watching it are able to sort of see themselves in ways that they might not have seen themselves before, depicted in a movie of this genre and at this global scale. I’m really excited to share it with the world.

What was it like to work with your fellow cast members and do you have a favorite cast moment?

I love everyone in this cast, and I again will repeat that I just have looked up to so many of them for so long. Unfortunately, when we were filming the movie, we were all sort of doing it in isolation. So, we didn’t really get to interact with each other too much. But I think my favorite moment of all of us together thus far was just being able to do the cast screening together and celebrate that together on Zoom. But still technically together through our screens. It was really cool to hear everyone talking about how important it’s been for them to be able to be part of this experience. It’s meant a lot to me.

What do you think the central takeaway of the movie is?

I think that what I want to take away from it and what I hope everyone else takes away from it, is that Raya is a character who definitely believes and has experiences to support the idea that the world is broken and it’s a scary place. And yet, despite knowing that, she becomes this character who’s willing to risk everything, to fight for a world that’s better than the one that she currently exists in without even recognizing or even knowing if that world is even possible.

I think for me and I think for a lot of people, we have this sort of yearning inside of us to be part of a world that’s better than the one we’re living in, like we know that there’s something wrong with where we are today and to be able to see Raya go through that journey of recognizing that even when it feels hopeless, it’s worth fighting for. That’s something that I definitely want to take away. I think it’s something that I hope that people take away from this movie as well.

Considering the theme of redemption, do you think it’s a good example for kids to learn about?

Yes, absolutely. I think that no matter who you are, no matter where you’re from, you’re going to experience moments in life that are painful and that are hard to go through. If we can recognize that pain is real and valid, but that it’s not forever and that even when we are in our darkest moments, there’s still hope and we can pull ourselves out of that and our communities can help pull us out of that, I think that’s really important. Gosh, it’s something that I need to remind myself of as a fully grown adult.