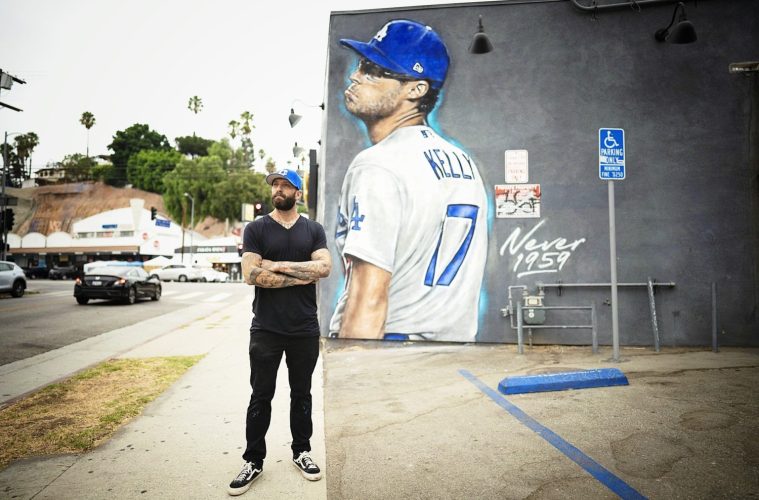 For anyone visiting Los Angeles, Never’s art can be seen from Santa Monica to Grand Central Market and beyond.

His signature style features monolithic, realistic portraits, plucked from a historic landscape of notable personalities, celebrities and athletes who have inspired the people of Los Angeles.

Never’s newest Silver Lake-based enshrinement of Dodger’s reliever Joe Kelly’s now legendary pouty face is the latest testament to Never’s personal admiration for the City of Los Angeles — all sparked through the relevant grit of a pitcher’s mocking taunt.

The taunt came after Joe Kelly air-mailed a pitch over the Alex Bregman’s head—a pitch that Kelly said was unintentional, but the league felt otherwise, as it was part of the reason Kelly was suspended for eight games, later shortened to five after an appeal. Words were exchanged by both teams over the offseason after the Astros were notoriously found to be cheating throughout the 2017 and 2018 seasons and MLB warned teams that there would be a zero-torlerance policy for hitting Astros players this year.

As the inning continued, Kelly struck out the Astros’ Carlos Correa and both immediately exchanged words. The benches cleared and a yelling match ensued, where essentially Kelly’s now-iconic pouty face single-handedly caused the first baseball fight in the COVID-19 era.

“I’ve always been a Joe Kelly fan, we actually played baseball at the same college — we both played at UCR — along with Austin Barnes and a couple other guys — I kind of followed his whole career — to Boston with the Joe Kelly Fight Club out there. I was a reliever myself, so I totally dug his style,” Never explained on L.A. Weekly’s Riding the Bench Podcast.

The former UC Riverside pitcher-turned-muralist said he was in Atlanta, GA when he saw Kelly frown and grimace unapologetically toward Astros shortstop Carlos Correa, remembers thinking it was instantly heroic.

“I was actually painting in Atlanta, but I was rained out one day in the hotel room, watching the Dodgers against the ‘Stros — ‘Dude, like did that just happen?!’” he said. “After such a crappy year and everything going on, it was so cool to see Joe Kelly do what was right for a change.”

As he sat in an Atlanta hotel room waiting for a storm to clear, the Los Angeles native decided to do what he does best — paint.

It was later reported and confirmed by Astros manager Dusty Baker, that Kelly told Correa, “Nice swing bitch” after striking him out, a detail Never included as the backdrop of the first inspirational canvas featuring Kelly.

“I felt kind of helpless being across the country — you can’t really paint a Dodger in Braves country,” he said. “So I went out to Blake’s, in the middle of a rainstorm and bought a canvas… spent, the whole, like, 6-overtime Blue Jackets game watching that and working on the canvas,” he said.

Sitting in the hotel watching playoff hockey & decided to use some of my leftover paint to pay homage to a true LA hero. This is for Dodgers (and fellow UC Riverside) pitcher Joe Kelly. There’s way he deserves an 8 game suspension for NOT hitting someone (which is also 8 games more than any Astros were suspended for cheating) #freejoekelly #niceswingbitch #dodgers #joekelly

“Justin Turner hit me up and was like,“Dude, Joe loves the painting, that’s so cool! Would you do another one for Joe?”

Never said he instantly agreed and painted another canvas for Kelly. Still, a bit of time had passed after Kelly’s frown-seen-round-the-world, Never said he felt like L.A. had fully embraced Kelly’s heroism, but wanted the piece to be relevant to Dodger fans.

“Man, that’d be really fun on a wall, but I don’t know if it will still be relevant when I get back into town,” he said. I looked at the schedule and saw the ‘Stros were coming back again.”

Any hardcore Dodger fan will notice the subtle differences between the original canvas and the mural — in terms of Kelly’s pose. Never explained that he painted the pitcher a few times, but the Silver Lake wall is his only painting of Kelly’s viral frown.

“The first canvas I did was him yelling at them, then I did another one of him making one of the faces, but I was like, ‘Man, I haven’t done the pouty face yet — this has gotta be the wall.’”

Now occupying wall space behind Floyd’s 99 Barbershop in Silver Lake, Dodger fans have been lining up to pay homage to Never’s newest creation.

“It’s on the corner of Sunset and Parkman, behind the Floyd’s 99 Barber Shop — it’s real close to the stadium, fans can go it on the way to the game, but it’s still really cool to see fans lining up.”

In a year filled with so much uncertainty, this mural symbolizes the metaphorical return of Dodger baseball to the City of Los Angeles. From the shutdown of sports on a global scale, to the long drawn out discussions over pay between Major League Baseball and The MLB Players Association. The 2020 MLB season is the season that almost never happened.

For Dodger fans, this underscores the poignancy of enduring back-to-back World Series loses — against two teams that used electronic devices to steal signs. Considering the disappointment that has reverberated through the Dodger’s fanbase since 2017, Kelly’s action become sweet revenge in an on-going war.

And it is as though Never heard the battle cry.

As the Astros returned to Los Angeles on Sept. 12, Dodgers fans awaited en masse outside Dodger’s Stadium to shame and taunt the tainted World Series Champions — all with a frowning Joe Kelly as the catalyst.

Heavily inspired by Los Angeles graffiti and tattoo culture, Never’s countless artistic contributions to the City of Angels are a reflection of the environment he occupies. One example is Never’s memorial of former Los Angeles Angels of Anaheim pitcher Tyler Skaggs.

While on the road with the Angels in 2019, Skaggs was found dead in his hotel room with narcotics in his system.

Proud to be a paint this mural for Tyler Skaggs right across from Samohi (where both of us played baseball… though he was much, much better). Thank you to @art.without.boundaries for making this happen & to the @pyfcsantamonica for the wall. Also a huge thank you to @jflare @theineman13 @heinemanscott @lgio27 @maxfried & Steve Heineman and the SMPD for supporting the project. Also thank you @debsmsoft @carskaggs for stopping by… that really meant the world #tylerskaggs

“When Tyler died — we wore the same jersey number in high school — it really hit home, one of those ‘it could’ve been me’ type situations,” he said. “It was right around the time that I was debating not doing memorial murals anymore. I didn’t like the sadness, but then I realized how powerful they were and I realized he probably wouldn’t get one from anyone else. It was a positive thing to keep his memory alive, kind of where we all grew up.”

Having dedicated countless images around the city, Never’s art has become a piece of the fabric of Los Angeles. But when tasked to choose a favorite, the list is constantly evolving.

“When you get to meet your childhood heroes, that really wins,” he said, referencing the recent Cobra Kai mural he painted. “Seeing my work become a part of L.A. culture is a dream come true, and now with the Joe Kelly one seeing such a positive in such a more or less crappy year for everyone — it’s constantly changing,” he said.

“At some point, I’ll have to sit down and make a list.”

The complete interview with Never1959, and more episodes of LA Weekly’s Riding the Bench Podcast can be found on Spotify and Apple Podcasts.