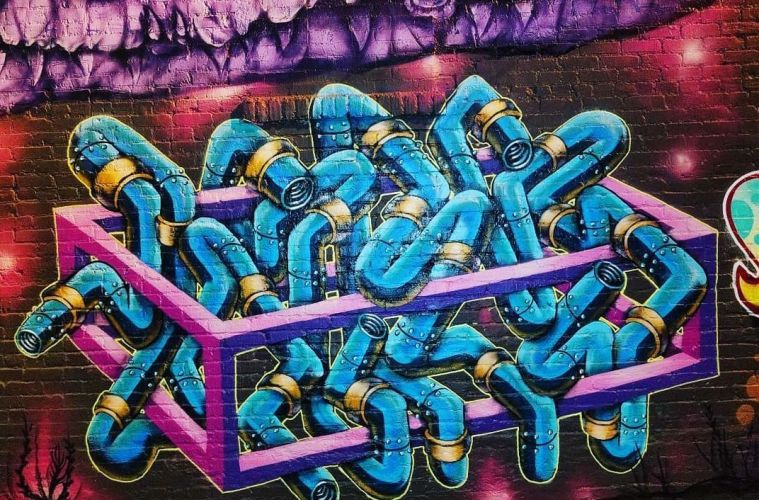 From Another Dimension: AR Street Art and 3D Graffiti

“Art becomes a really powerful glue between public entities and future technologies,” said Justin Fredericks, co-founder and CEO of the L.A. digital firm Art House, which collaborates with street artists to add augmented-reality components to their works. “There are art pieces existing on buildings that become that layer between the physical and what then can be digital, which is only limited by the imagination.”

Fredericks says they’ve seen this coming for a while. In the past year, Art House teamed with popular L.A. street artists James Haunt and WRDSMTH on augmented reality versions of their murals and pieces, which have technical effects on top of existing content to create a new experience. These work by syncing a phone with an art piece and pointing at it, and animation or original content appears. For example, WRDSMTH’s typewriter letters are animated to type, and the eyes on Haunt’s faces blink. 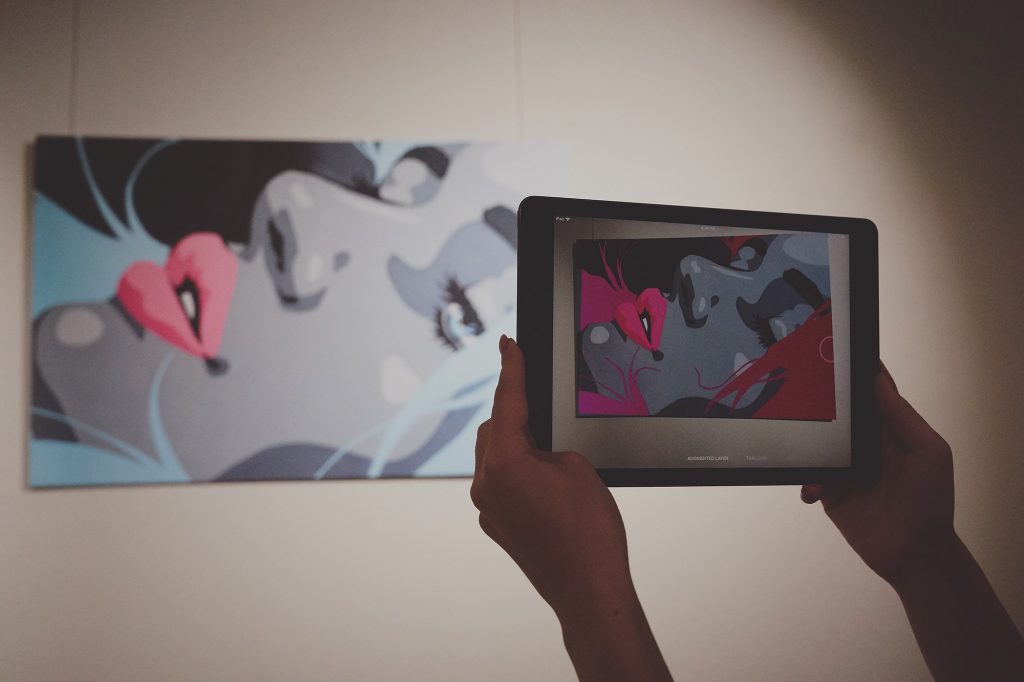 In August, a high-profile, well-funded AR 3D street art installation will debut at Inglewood’s 100-unit Fairview Heights Housing Development at 923 E. Redondo Blvd. The four-story main mural piece will be by accomplished L.A. artists Ryan “Yanoe” Sarfati and Eric “Zoueh” Skotnes, whose three-part work Rise Above will incorporate LED light panels with a nightly show with circling lights. It is a collage of diverse, intertwined forearms and hands, with poppy flowers, clouds, a green field, blue shapes and painted Aztec and African symbols, according to a meeting report of Inglewood’s Art Commission.

L.A. designates a 1% tax on new or redeveloped properties valued at more than $500,000 for public arts. Proceeds can number into the millions of dollars for artist disbursement. The Fairview Heights project is part of this “Percent for Arts” L.A. ordinance. The aim is to put a hard-to-define value on local arts culture, linking land costs with city-authorized art placement. The Percent for Arts rule valued the Fairview Heights project in July 2020 at $153,000, according to the city’s planning department. The city of L.A. also has sheltered public money for city-sanctioned street art through its Public Works Improvement Art Program, which sets aside 1% of the budget of city construction projects for public art.

Of the non-AR, handmade L.A. 3D street art is artist Punk Me Tender, who constructed two recent Hollywood murals that incorporated layers coming off the wall, made with items such as plywood, aluminum, plexiglass and 2×4”s. 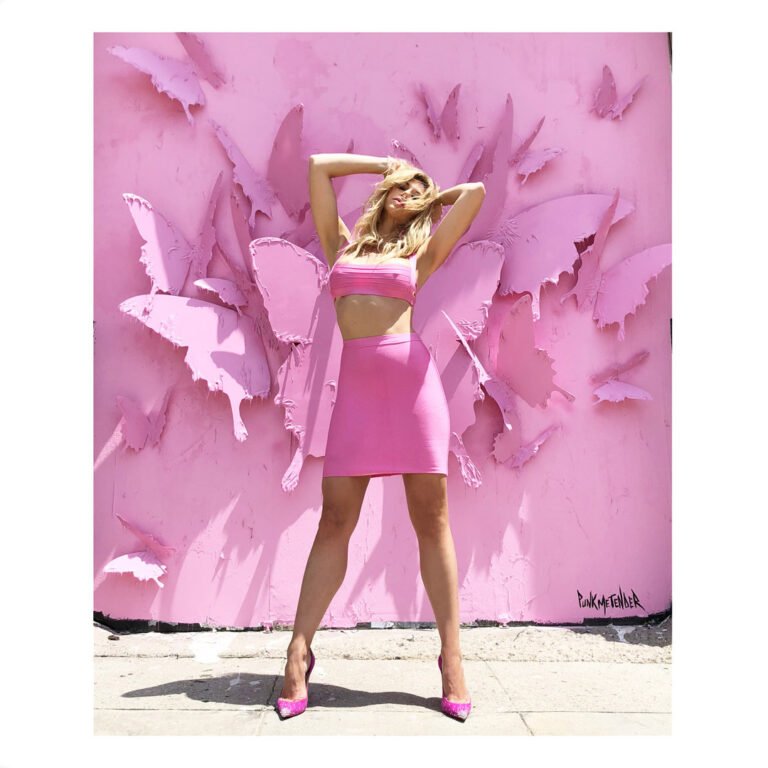 “On the technical concept, it’s much work on prep, installing and making the wall,” Punk Me Tender said of building his sprawling “Human After All” wall on Amoeba Music. “It took more time to prepare it than to install it. … It took a lot of money and a lot of energy.”

Asked about mapping street art’s future, the artist points to elements being used, coincidentally, in the Fairview Heights project.

“We started from street art, it was for the eyes,” Punk Me Tender said. “With 3D, we’re adding the touch and movement to it. Then obviously, film, numerics and visuals will be the next step, I think. Then, also light at night, neon stuff and things like that.”

Street art observers have noticed the 3D and AR push. Although L.A. does not use the style as often as in Europe, it has the potential to become more ubiquitous here, said Fredrik Lidskog, who runs the “Impermanent Art” street art photography Instagram account and mural agency.

“With 3D street art, when it’s done well, which is not always the case, there is sort of an added layer of fun to it, of discovery and interactivity than 2D art,” Lidskog said. “I’ve seen more examples recently of augmented reality, enhancing the mural in a way where if you look through your phone, it’s literally moving or coming off the wall on your phone, which seems like the future.”

Often, glimmers of street art overlap with graffiti art. Unlike 3D or augmented street art, 3D graffiti art has sustained itself for years without much public or private investment.

“I’m really influenced by modern design, like ’50s architecture and furniture, and that whole kind of ‘Jetsons’ thing is fascinating to me,” Mers said. “I’ve been trying to fuse that with my graffiti, which is a strange thing to morph because those are almost polar opposites.” Mers’ recent L.A. pieces include a striking 3D green lettering of his name hovering above a large, red circular background.

“I’ve done 3D graffiti since the beginning, since early on, and for me, I gravitated toward the freedom,” Mers said. “I liked the 3D aspect because it gave me more to play with, expand and contract, forward and backward, as opposed to just side to side and up and down.”

Another L.A. 3D graffiti artist is CBS and Wai crews’ Tewsr, who had a mind-blowing co-production with Brazilian graffiti artist Binho at downtown’s Container Yard. A building interior corner was used as a 3D illusion for an alien invasion, where painting on opposite walls connected in the middle so convincingly, it looked like it could be touched.

“I was doing the traditional graffiti and was like, ‘Alright, it’s fun to do, and there are a lot of techniques to it, but it didn’t seem you could push it further than being two-dimensional,’” Tewsr said. “I wanted to push it further. … I was rendering [characters] out with shadow and light, as opposed to doing them flat without light.”

Ironically, graffiti is the seeming antithesis of AR murals and “smart cities,” which may leave a data trail through phone apps. Graffiti is anonymous due to its often unauthorized or quasi-authorized nature.

“To me, the commercial work is a little more feasible to do three-dimensional stuff,” Tewsr said. “To people who don’t really speak the language, 3D [graffiti art] is a good in-between because to most people, it looks like a sculpture, whether or not they can read it. If it’s done well, it has its own statement.”

The Wave in Seoul (Courtesy of the Art and Co)