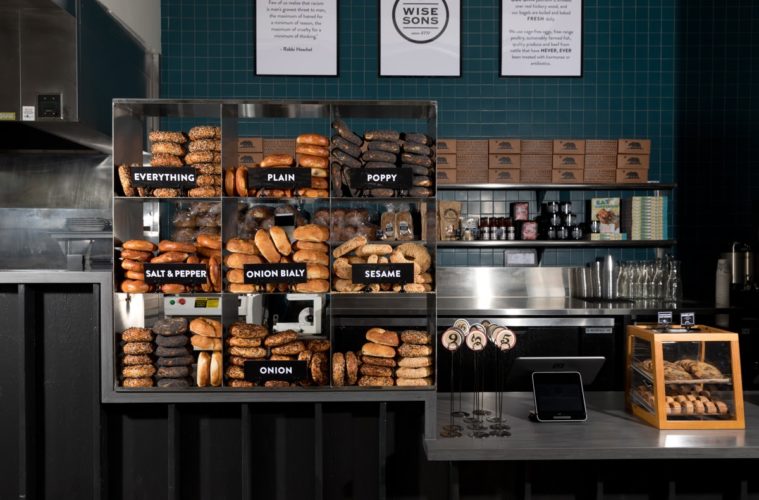 Over the past decade, Wise Sons has earned its reputation for honoring the classics, including hardwood-smoked pastrami, made with hormone and antibiotic-free beef and house-baked goods like bagels, bialy and buttery babka filled with Guittard chocolate. The intoxicating aroma of everything bagels and onion bialy wafts its way out onto Washington Blvd. and they definitely deserve a spot on the best bagels list – not too doughy and the perfect vehicle and size for the classic smoked salmon breakfast.

Other menu highlights include the OG Reuben, Matzo Ball Soup made with organic chicken broth, Potato Latkes, Naturally Fermented Sour Pickles, and Bodega Egg & Cheese Sandwich served on bagel or bialy. The smoked trout salad on rye is exceptional alongside their coleslaw (the true test of a good deli).

Unique to the L.A. menu is a classic Diner Tuna Melt with wild albacore, lettuce, tomato, horseradish aioli, griddled with American and Swiss on rye. The No. 19 pays tribute to Langer’s Deli – the untoasted sandwich features Russian dressing and cold Swiss on rye.

“Growing up in Southern California, I have immense respect for the Jewish delis in Los Angeles – some of my earliest deli memories are in the booths of legendary places like Langer’s, Brent’s and Pico Kosher Deli – so this is a bit of a homecoming for me,” says Wise Sons Founder Evan Bloom in a statement. “Los Angeles has the best collection of Jewish deli food in the world and we’re excited to join that already existing pantheon.”

A collection of framed family photos that tells the story of the Bloom family, starting with Evan’s great-grandparents’ Jewish deli outside Boston and a wall of pendants by Scott Richards pays respect to some of L.A.’s more renowned Jewish delis. A mural on the back wall by Berkeley-based illustrator Alexandra Bowman illustrates the colorful and chaotic deli scene at Wise Sons.

The modern deli has indoor and outdoor seating and is already buzzing with lines out the door during their soft opening. There’s no deli counter, but everything is available to go in bulk or prepared dishes – strongly suggest calling those orders in ahead of time. They are taking holiday catering orders now.