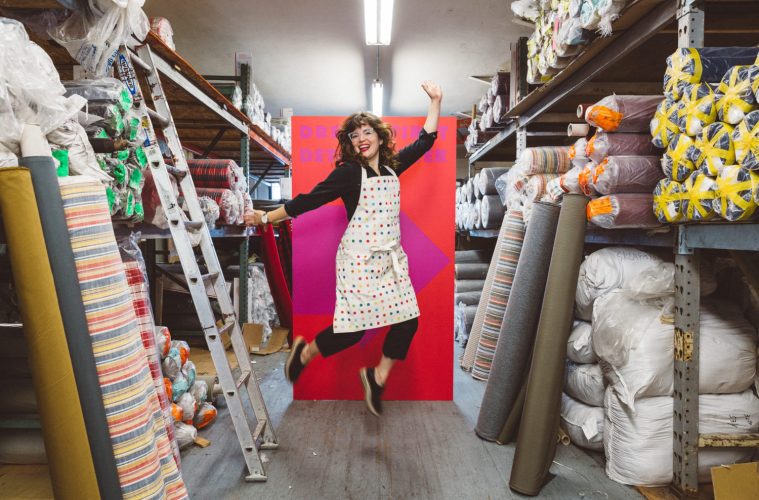 Ellen Bennett Has The Culinary World Hanging From Her Apron Strings

Whether it’s for a civilian or a Michelin starred chef, Glendale-born Bennett, who launched Hedley & Bennett workwear, has transformed the time we spend in the kitchen as functional and fashionable.

It all started at the back door of Providence back around 2012, when Bennett returned from two years in her mother’s Mexican homeland and needed a job.

“I just walked into the back door without any kind of appointment,” Bennett tells L.A. Weekly over the phone from her Echo Park home. “I knew that if I could talk to the chef I’d have a shot, so I went through that back door and saw a busboy walking out and I asked him in Spanish if the chef was there and if I could talk to him. He walked me through the entire restaurant and dropped me off in the kitchen. I gave my little pitch to Michael Cimarusti and it was through that back door that my entire life changed. That was the very beginning of the L.A. journey.”

That journey began with Bennett’s and her fellow chefs’ frustration with the poor quality of restaurant aprons.

The employee entrance at Providence (Studio 1208)

“When we started and I was a line cook, you could lift the other aprons up to the light and see through them,” she remembers. “You couldn’t adjust the straps, they were very commoditized. They didn’t have any thoughtfulness to them at all. The pockets would constantly rip off. I’m also a runner, so I loved the idea of creating a uniform that made people look good. We’re in there like athletes for 10 hours at a time working our butts off all day and night, why shouldn’t we have a uniform that looks great?”

Known in the L.A. restaurant community only as “Ellen The Apron Lady,” at the outset, Bennett designed her own durable version using quality materials which became an immediate hit. She’d set up a booth at 6:30 a.m. on Sundays at the Hollywood Farmers Market, break it down at 2 p.m. and then jump into her car to get to Providence down the street by 4 p.m. to clock in and  work until midnight. Quite an endeavor to sell three or four aprons every Sunday, she admits, but learned so much in the process, getting constant honest and direct feedback.

She’d cold call people like restaurateur Nancy Silverton and just show up at Mozza with a bag of aprons to peddle. Today, Hedley and Bennett is on track to sell more than 200,000 aprons this year, which includes a popular children’s line and has branched out to facial masks as well over the past year. Silverton is still a loyal customer and one of her biggest fans.

Where it all started – The Hollywood Farmers Market (Studio 1208)

So what was some of the feedback she got from professionals and home cooks alike?

“Durability was at the very top of the list,” says Bennett. “They wanted straps that could be long enough to go around to the front and could be tied into a bow no matter what size you were. Then there was the weight of the fabric. They didn’t want it too heavy or too light. Since I was also cooking, I understood that. It made sense to me viscerally. I knew it couldn’t be too heavy in a hot kitchen. Because I spoke their language, it clicked. They wanted the pockets to be reinforced, they wanted them to be long enough to cover sides of the body, and have a towel loop. They didn’t want it curling up at the bottom, it had to be adjustable. Chefs are very particular and have an opinion about everything. There was no shortage of commentary. I built the core and then tweaked the look over time.”

Soon L.A. restaurant kitchens started seeing chefs like Silverton, Jon Shook and Vinny Dotolo, Evan Funke, Brooke Williamson, Tim Hollingsworth and Nyesha Arrington to name a few, popping up in Bennett’s aprons. It was a deep culinary world-type following in the community that took off from there for workers who held aprons as close to the vest as their knives.

“It was clear from the first day Ellen walked into the kitchen at Providence that her energy and drive would take her places,” her former boss and mentor Cimarusti tells L.A. Weekly. “Ellen quickly wove herself into the fabric of our kitchen. She may pay the bills making aprons these days, but there is no question that her culinary chops are real. I don’t exactly remember when it was that Ellen began making aprons, but I do remember her tying one of the first Hedley and Bennett aprons around my waist and I remember her stealing a pair of the Lululemon pants I used to wear in the kitchen to try and make a pattern. (I want those pants back Ellen.) Our crew at Providence wears Hedley and Bennett aprons today as do so many others around the country and world.”

Hedley and Bennett wasn’t an overnight success and there were plenty of failures, like the time her former boss and current client Chef Josef Centeno of Orsa and Winston and the venerable Baco Mercat ordered 40 aprons at a time when she had no resources, a story she recalls in the “First Scary Thing” chapter of her inspiring how-to on building your own business. It’s all about building confidence and convincing powerful people to take a chance on you.

“I’ve had more failures than successes and I’m very willing to feel the failures,” says Bennett, who named the company after her English grandfather Hedley, a rocket scientist who would read the Encyclopedia Britannica on the weekends.

“I’ve gotten used to the feeling of being comfortable with the uncomfortable all the time. It’s not just about pure success. It’s so easy to get discouraged, but it’s about recognizing what you learn from failure and build a staircase of failure towards the next big thing instead of letting that failure stack up on your shoulders and weigh you down. It’s all how you approach those failures. I want this book to be a gust of energy and perspective shift on how you can make it.”