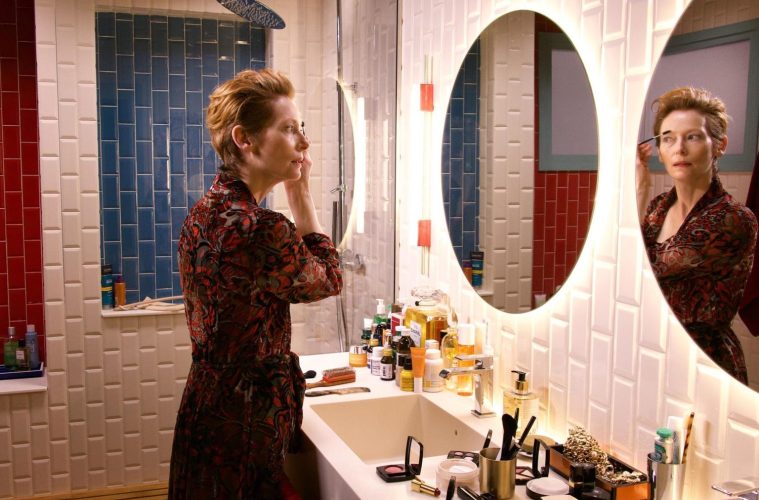 Almodóvar’s The Human Voice Finds Beauty in the Lovelorn

Chuck Wilson3月 16, 2021
As The Human Voice –Spanish filmmaker Pedro Almodóvar’s glorious new 30-minute film- opens, an unnamed woman (Tilda Swinton) steps onto a soundstage wearing a full-skirted, Jezebel-red ball gown, but with her short hair mussed, as if she’s been frantically running her fingers through it all night. She takes a seat on a rolling stool and sighs, a Cinderella with no dance partner.

As a jump cut will soon reveal, our heroine is only wearing that ball gown in her mind’s eye, but it’s a fitting image for the emotions swirling dramatically within her. Her longtime lover, an unseen man of fame and fortune, has failed to show up at the Barcelona apartment they share whenever he happens to be free. The apartment, we’ll soon see, is a set on that soundstage. The woman knows every corner of it intimately but not all the drawers in the kitchen open, as if to suggest that this love affair was destined to be temporary — an artificial construction.

The lover has left behind a Border Collie named Dash that’s clearly pining for him. There are designer clothes the man is anxious to retrieve, including a black suit the woman has laid out on the bed and next to which she momentarily sleeps, her body curved toward it out of both habit and longing. When the man finally calls, the woman puts in her ear buds and begins to speak, with a false gaiety that quickly gives way to deep currents of regret, despair, and eventually, anger. The 20 or so minutes that follow constitute the performance of Swinton’s life.

The apartment through which she moves, with production design by Antxón Gómez and María Clara Notari, is ridiculously fabulous and will probably make you want to paint every wall in your house, or maybe just pack up and move. An enormous circular shower head beneath which Swinton’s character dunks her head after swallowing a handful of multi-colored, multi-shaped sleeping pills — the same medicine in different shapes and colors — is a wonder to behold. You could watch this movie with the sound down and be entranced.

Written by the French poet-filmmaker Jean Cocteau in 1928, The Human Voice has been filmed several times and it inspired Almodóvar’s Women on the Verge of a Nervous Breakdown. In this version, filmed this past July under COVID restrictions, the filmmaker’s devotees will discover recurrent visual cues, as well as a cameo by the director’s brother and producer, Augustin, playing a hardware store clerk who sells Swinton an ax that he wraps up with the solemnity of a man selling a butcher knife to Norman Bates.

The ax does indeed figure, wittily, in the woman’s plan to deal with her absent lover, but such details should be discovered by moviegoers. “Moviegoer” is a word that’s taken on a new poignancy this year and one that’s always seemed close to Almodóvar’s heart. His movies have always been made with an eye to the audience’s pleasure. They’re tactile, sensual films, bursting with color, while the human emotions, so memorably melodramatic, are scaled toward hope, even when the story takes a dark turn. To Almodóvar, the world is beautiful even on its worst days.

The Human Voice is only a half hour long but a half hour may be all the movie we can handle, collectively, as we begin our nervous parade back into theaters.  It’s the kind of film that makes you wish we were all vaccinated so that Almodóvar’s unexpected pandemic gift could play at every multiplex and indie theater. It would be lovely to gather there as one to watch it — a quick, restorative feast to welcome us back into the dark.