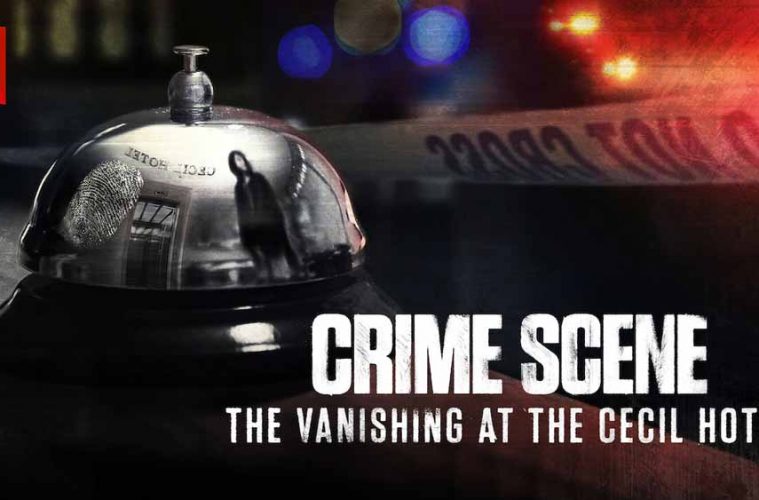 Erin Maxwell2月 11, 2021
The Cecil Hotel in Downtown L.A. has been called “hotel death,” and “the place where dreams go to die,” but as its former manager Amy Price sees it, despite the murders, overdoses and suicides that took place there, it was mostly just a “flop house.” Thanks to overzealous web sleuths and true crime fans, the Cecil’s sinister reputation was solidified after Canadian tourist Elisa Lam went missing while staying there back in 2003, only to be found lifeless and decaying (spoiler alert if you don’t know the story) in the hotel’s water tank on the building’s roof. But what exactly led to the young woman’s inexplicable death?

The new Netflix’s docuseries Crime Scene: The Vanishing At Cecil Hotel from Joe Berlinger (The Ted Bundy Tapes), recounts the Lam case in meticulous detail over the course of four episodes, delving into both the victim and the hotel’s backgrounds and exploring how the fascination and ultimately, the obsession with what happened amplified the L.A. landmark’s infamy.

Price’s pragmatic yet animated way of sharing and first hand knowledge of the hotel makes her the most credible and engaging talking head in the series. And while some will take issue with the way the Cecil’s story is drawn out, she tells L.A. Weekly she was very happy with the final product.  “I think Joe Berlinger and his team did a great job doing their homework,” she says.  “It was refreshing to have a piece that wasn’t so focused on the supernatural. I participated in the show for that very reason.”

Episode 1 of Crime Scene: The Vanishing at the Cecil Hotel. c. Courtesy of Netflix © 2021

The supernatural angle emerged mostly due to a security video which shows Lam acting erratically in the hotel’s elevator. With the LAPD’s resources focused on Christopher Dorner (the ex-L.A. cop who started killing his former comrades on the force) the detectives on her case opted to release the bizarre clip in hopes the public might help and provide leads for Lam’s case. But when the footage went viral thanks to You Tuber interest and media shares (including some by this publication) it led to amateur detective and ghost-hunter interest as well as lookie-loo visitors and countless social media-shared theories about what happened, many of which referenced the hotel’s violent past. Esotouric‘s Kim Cooper and Richard Schave provide background in the doc, including information about one of the Cecil’s most infamous tenants, Richard Ramirez.

The Ramirez connection gives the doc an especially eerie feel. Most Netflix viewers still have the “Night Stalker” stuck in their subconscious after the streaming service’s equally arduous look at how the satanic serial killer terrorized our city. But did the ghosts from the Cecil’s creepy past play a part in all the tragedy and terror that occurred there later?

The doc suggests the real horror wasn’t about the spiritual world, but the living. As Price shares in the doc, “There was some despair going on. Tourists probably don’t realize this, but the Cecil Hotel was an alternative to apartment living for people who didn’t have a deposit, can’t pass a background check and don’t want people knowing where they are. Sometimes it was scary.”

In the 10 years that she worked there, Price says there were thousands of 911 calls, and though the hotel attempted to re-brand itself as a trendy hostel to attract young tourists like Lam, its Skid Row-adjacent location was quite a surprise to visitors expecting “La La Land,” as Lam is quoted via her Tumbler account.

Price was equally naive at first. “I was initially hired to help out with furnishing rooms, I’m an interior designer,” she shares. “A little later down the road I transitioned into the general manager role. That’s how it all started. I didn’t even research where it was. All I heard was that it was a hotel that was in Downtown Los Angeles. I walked in completely blind. ”

Episode 3 of Crime Scene: The Vanishing at the Cecil Hotel. c. Courtesy of Netflix © 2021

The Vanishing At Cecil Hotel would definitely be more chilling and effective if it was cut into a two-parter. Conspiracy theories, public reactions and personal stories are repeated and rehashed too often and using Lam’s journal-like blogs as a narrative device starts off intriguing, but quickly become tiresome. Though some of the tangents touched upon by journalists, law enforcement and historians are quite powerful, the side note approach comes off disingenuous at times.  Perspectives and context about the changing landscape of Los Angeles, gentrification and the homeless problem for example, could (and should) really be part of a whole other series.

Still, the docuseries’ efforts to examine our cultural misunderstanding of mental health issues not to mention its critique of our voyeuristic obsession with the lives (and deaths) of others, is spot-on. By the fourth episode we finally get to the goods in terms of what actually happened to Lam, and while it doesn’t really coalesce with the countless strange coincidences, the seedy history of the hotel or the characters who fell under its wicked spell, it is as significant as it is sad. And no, it is not about the supernatural.