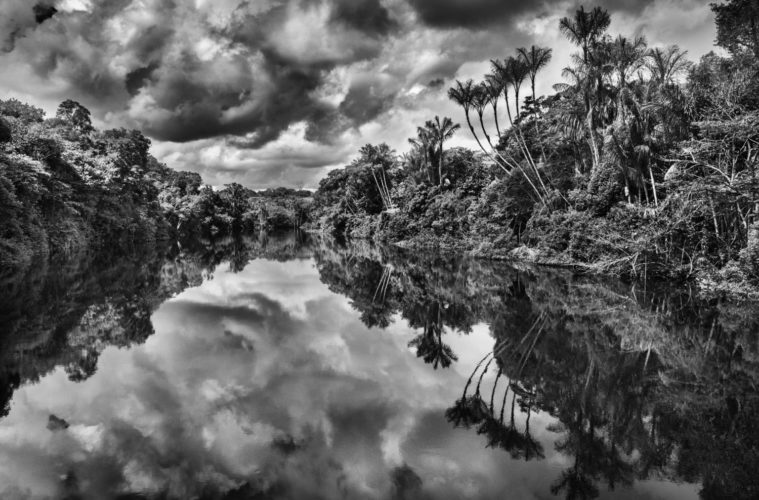 Sebastião Salgado’s Amazônia Is Too Vast For Just One Platform

Before you peruse renowned photographer and filmmaker Sebastião Salgado’s hefty new Taschen tome or attend the Peter Fetterman Gallery exhibition of selected prints from the project, download its remarkable soundtrack. Available on Spotify, it is an integral accompaniment rafted by electronic music legend Jean-Michel Jarre as an evocative sonic world-building. The dimensionality of its orchestral and field-recording compositions creates a moody and magical energetic tone for encountering the art and deepens the viewer’s sense of being transported to another place — to the place. To the place that for Salgado, is the beating heart of the world and which must at all costs be saved.

In Salgado’s trademark high-contrast, operatic style of black and white photographs, Amazônia’s hundreds of plates — including in the rare sumo edition of the book on display with its Renzo Piano-designed book-stand — and the dozens of gorgeous prints in the chapel-like gallery installation, conjure views of landscapes and their inhabitants. These images range in scope from the unspeakably vast to the movingly intimate, from the melodramatic and sublime to the picturesque and lyrical, and were made over the course of nearly a decade’s worth of weeks- and months-long forays into the most remote territories the region has. The Amazon in this serial masterpiece is revealed as both a very real place teeming with life yet under constant threat, and an irresistible dream for millennia of seekers, myth-makers and colonizers.

For his part, Jarre uses a fantastical, otherworldly blend of electronic and orchestral instruments with real-life nature sounds and indigenous voices, because, as he writes, “I wanted to avoid the ethnomusicological approach, or creating background music. I approached the Amazon with respect, in a poetic and impressionistic way… It carries with it a powerful imagination; for both Westerners and Amerindians.”

Indeed in Salgado’s spectacular frames, it is clear to see how the wondrousness of prolific waterfalls, snaking rivers, craggy soaring mountaintops, invisibly distant horizons and expressionistic clouds, in which each and every one of billions of majestic trees somehow seems visible like faces in a crowd, like the craziest pointillism ever, could both capture the global imagination and remain special and sacred to its denizens. Across the hundreds and hundreds of pictures, rivers carve through the forest canopy like roads or huge pictographs, their dark lines zigging and zagging and oxbowing and widening until they are almost like narrow glassy seas, shiny silver plains, reflecting biblical clouds and absorbing violent rains.

Beyond the sweep and the fine details of this most primeval nature, Salgado also depicts the people that live there. Each of the many ways he photographs them tells their stories in unique ways — in action during hunting, farming, or performing rituals and ceremonies; candid, casual at rest or play; constructing or simply organizing architecture and crafts; and occasionally in a more classic studio mode of staged portraiture enacted with a tarpaulin under the cover of the trees.

As a Brazilian artist especially, the allure and the fear of destruction of the Amazon has a very personal, emotional and identity-driven dimension for both Salgado and his wife and creative partner Lélia Wanick Salgado, their circle of experts and all their team members; this is an unapologetically activist document. Every picture here is a renewed plea for assertive, urgent conservation. Salgado has travelled into the Amazon regularly since the 1980s, developing lasting rapport with several of the nearly 200 tribes that live in the Brazilian Amazon alone. Some, like the Yanomami, he has returned to over the years; while he has received special, unique access to others — becoming, for example, the first non-indigenous person to visit every village of the Zo’é people.

“Even after a career full of extraordinary experiences, nothing has given me greater joy than working with the dozens of indigenous tribes portrayed in this book,” Salgado writes in its introduction. “Through them, thanks to them, I reconnected with my own pre-history. I rediscovered the lives we led thousands of years ago… My wish, with all my heart, with all my energy, with all the passion I possess, is that in 50 years time this collection of images will not resemble a record of a lost world. Amazônia must live on.”