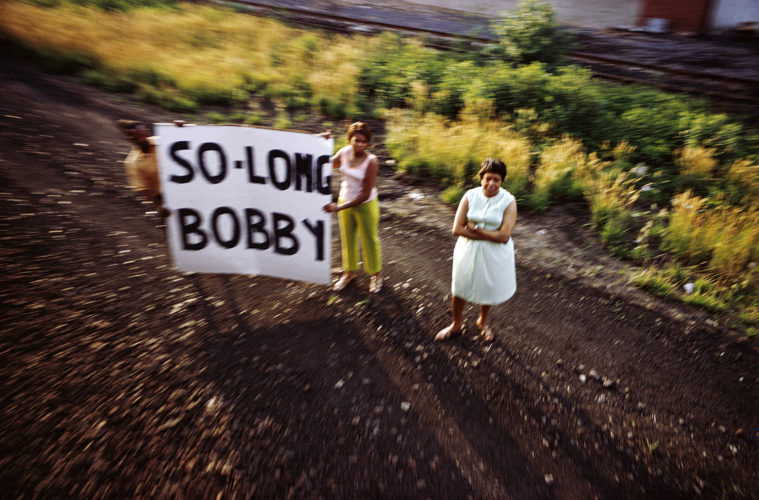 Paul Fusco’s RFK Funeral Train is a Portrait of America

Paul Fusco (1930-2020) was an acclaimed photojournalist who covered some of the most influential figures and seismic political and cultural events of the 20th century, from the activism of Cesar Chavez to the apocalypse at Chernobyl and the ravages of the 1980’s AIDS epidemic. But some of his most indelible images were made on June 8, 1968. That’s when Fusco boarded the “RFK Funeral Train” — a slow-moving engine carrying the assassinated candidate’s body from New York City to its burial place at Arlington National Cemetery in Washington, DC.

Now James Danziger and Peter Fetterman have joined forces to present the first Los Angeles showing of the newly minted master suite of RFK Funeral Train pictures — 22 images once at risk of being lost to history’s dusty archives. The exhibition, perhaps surprisingly, comprises large-scale color prints — surprisingly because we have become so accustomed to thinking of history in terms of black and white pictures. Fusco used Kodachrome film, and the contemporary masters who minted this new master set used all their skills to replicate the stock’s effect and keep its promise for vibrance, depth and warmth.

The images each have a unique emotion, almost a personality, and the array of views of the American people and their landscapes feels both intimate and collective. Fusco shot for the entire eight hours it took for the train to make the usually four-hour journey. Hundreds of thousands of people lined the tracks of this train as it made its way, in huge crowds, small groups and alone. The tracks pass through urban courtyards, suburban lawns, dirt roads and old fence posts, along bridges and byways and secluded patches of nature, farms and even boat docks. People gather with signs and cameras and American flags, they wave and stand at attention, they cry and hug one another, they stay stoic and solemn; they’ve walked and biked and driven; they’ve been waiting all day.

All these differences between visions of America are celebrated and gathered in this selection; it is impossible not to notice the racial make-up of the crowds and think about 1968 on the East Coast. But it is equally impossible to miss how throughout these differences, these people are nevertheless standing united — in grief. And they are not only grieving the loss of one man. King was killed the same year, and America was in trauma from the violence at home and the war abroad. Fusco’s one-day journey yielded timeless, empathetic, and masterfully composed images which it is profoundly resonant to revisit.

As it happens, the photographs have taken something of a journey of their own. In 1968, Fusco had been on assignment for LOOK Magazine, but as the publication came out bi-weekly, he got scooped by LIFE, and none of the nearly 2,000 images he captured that day were published. When LOOK folded they donated their overall archive of something like five million photographs to the Library of Congress, which included Fusco’s in an “in there somewhere” kind of way. The artist’s own reserve of 100 pictures were also in danger of being forgotten — until an editor at Magnum showed them to JFK, Jr.

It’s fitting that these exceptional pictures be rediscovered and shown now, at a time in U.S. history plagued by so many of the same persistent problems — racism, poverty, division, oppression — which RFK was so keen to combat, and at a time when taking a fresh look at history is so urgently required to reshape the future with the power of the truth.