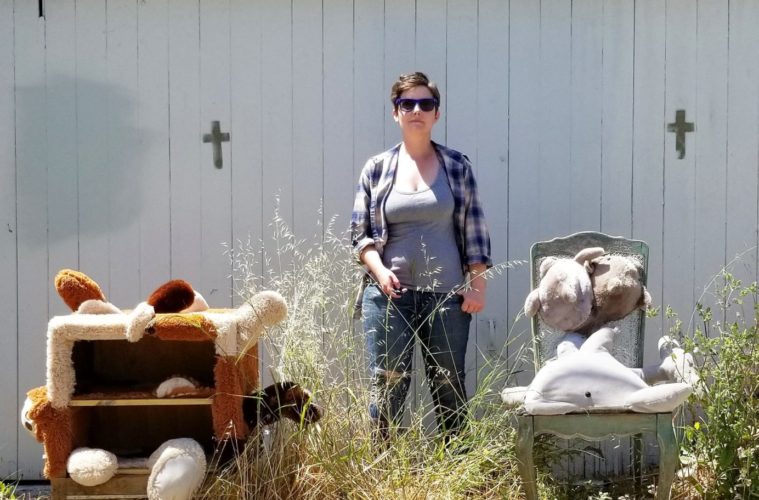 Sculptor Debra Broz crafts her mixed media pieces by rescuing second-hand ceramic figures, stuffed toys and sometimes furniture — then using her skill set in ceramics restoration to recombine them into reinvented, hybrid and even paradoxical creatures. Both nostalgic and unsettling, once discarded but once again beloved, her objects question and derail the original intentions for the figures, layering a one-of-a-kind artistic intervention onto mass-produced, unmonumental decor. An exhibition of new pieces full of charm, grace and mystery is now open at Track 16 in downtown Los Angeles.

DEBRA BROZ: It’s hard to remember when I first applied the label “artist” to myself, but starting around 2 or 3 years old I was drawing all the time and making up animals. Most often I drew an animal I made up called the waguma. The thing about the waguma was that it could look like virtually anything — it could have spots, stripes, fur, spikes; it could be any color, or have any number of legs. It was a very undefinable animal. So, while I’m not sure if at that point I was yet an artist, I was definitely an inventor and documentor of waguma.

My work is about bringing love and attention back to unwanted things with humor, tenderness and an eye toward the unusual.

Ornithologist? Evolutionary biologist? Anthropologist? Psychologist? Those are all things I’m interested in. Maybe I would run a weird museum (something like the Bunny Museum in Altadena) or a curiosity shop. I do love being around and learning about strange things.

I got my Bachelor of Fine Arts at a tiny liberal arts college in St. Louis, Missouri. I thought I wanted to teach art in college eventually, so it seemed like a natural step to take (even though that is not what ended up happening).

The first solo show I had was in Austin about 12 years ago. The gallery owner lived in half of the house and the other half was the gallery. It was very DIY, and he gave me the key to let myself in while installing the show. When I showed up for the first install day and unlocked the door, there was a naked guy sleeping on a mattress right in the middle of the gallery! He had not heard me come in, so I very quietly backed right out of the door and left. The owner had neglected to tell me that he was letting a friend stay in the gallery space, and simultaneously neglected to tell his friend that I would be there! I was eventually able to install the show and no further nudity occurred.

My show Creature Comfort opened on December 4 at Track 16 gallery in the Bendix Building downtown. It’s open through January 15. I’ve spent the year hunting for and altering secondhand ceramic figurines, stuffed animals, and furniture and I’m really thrilled with the abnormal world of misfits I’ve created.

Do you listen to music while you work? If so what?

I usually listen to podcasts, mostly about science, art, culture and psychology. Ologies, the Opportunist, and Heavyweight are some current favorites. That said, I do sometimes listen to music, mostly indie rock like Courtney Barnett, La Luz and Wilco. I also made a playlist about friendly monsters, weirdos, and love to correspond with the feelings in my current show, which you can find here: debrabroz.com/cc-playlist.html.