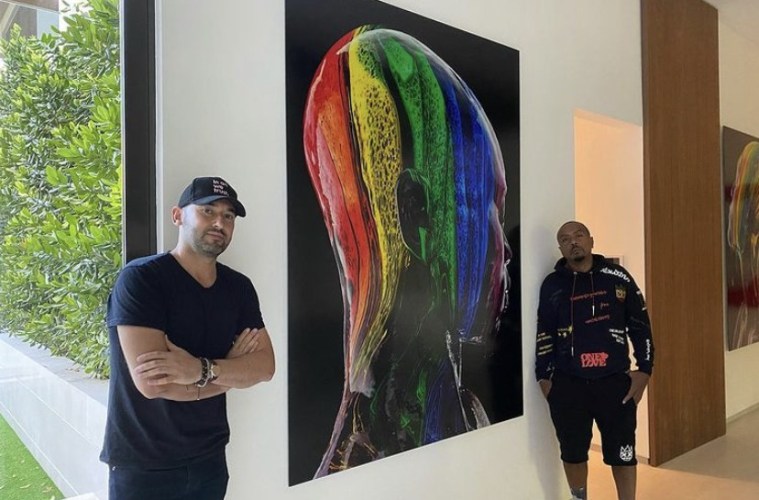 Tim Tadder brings his universe of camera and directorial skills, honed to great acclaim in the editorial and commercial lens worlds, to his deeply personal, seductive and impactful fine art portfolios. In three series especially — Nothing To See, United States of Purple, and his most recent project, Black is a Color — Tadder harnesses and amplifies the emotional and narrative power of pure color, in the service of heartfelt commentary on the state of society. In Nothing To See and United States of Purple, Tadder makes assertive metaphors for the frustrating, polarizing disregard for truth and empathy in political discourse. In the dynamic, slightly psychedelic Black is a Color, Tadder executes sensuous paint-pours in exuberant, expressive appreciations of free-thinking and unity beyond divisions.

My work is about the human condition and the way society portrays, interacts, and impacts.

I would definitely still be involved in some type of creative or entrepreneurial endeavor. I really enjoy creating opportunity out of ideas.

I did not go to art school. I never imagined that I could have a career in art that would sustain me financially and therefore, I was guided to pursue more educational and business practices.

Time Tadder, Black is a Color

Why do you live in SoCal, & not elsewhere?

I live in a small beach community, Encinitas. I have a very low-key lifestyle and it’s important for me to have an energy that is very calming and peaceful and not chaotic. Living here definitely suits my persona and my working style.

The first time I really exhibited on a large scale was in 2017 in Miami during Art Basel. I had other smaller shows, but this is something that brought a lot of attention and validated the quality of my collections.

Currently the images are prominently displayed in major galleries such as Avant Gallery. We have multiple pieces in Hudson Yards, New York and in Brickell City Centre as well as Aventura Mall. When we first announced our relationship with Avant Gallery, we had a large showcase in both New York and Miami. The work has been so well received that it continues to be displayed prominently within the galleries.

Tim Tadder, Nothing to See

Yes, I listen to music while I work. Since COVID started, I’ve been listening to a lot of Grateful Dead and the Dead and Company with John Mayer. I’ve stuck with it because I think the period of COVID hasn’t changed and I tend to listen to periods in my life and that has been behind my day-to-day.

Time Tadder, Black is a Color