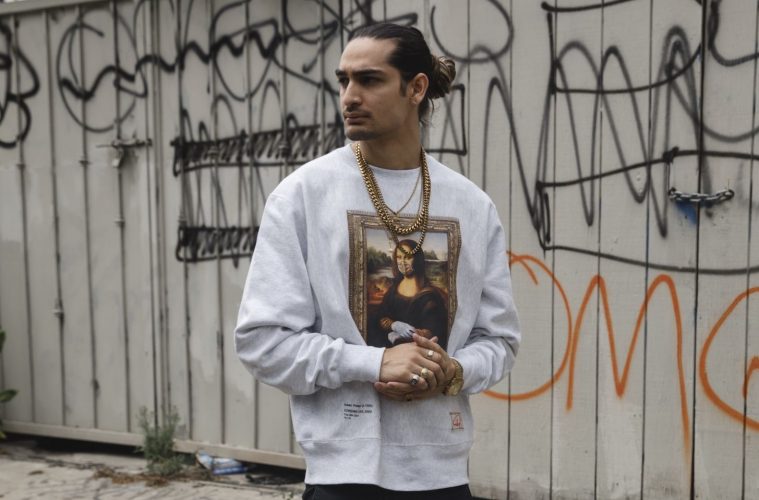 For Isaac Pelayo, the ultimate goal is to put his own distinctly contemporary, personal stamp on the canon of Western painting. He does this by recombining street art and pop culture references with foundations laid in hard core art history. But in order for the statement to work, for the wit to land, the foundation in classical technique has to be perfectly on point — and the willingness to countermand that technique has to be fearless. Pelayo’s never-ending journey toward the autodidactic perfection of his technical skills reached a breakthrough in his version of the Mona Lisa as a lowkey self-portrait, echoing da Vinci’s own inside joke. The quest has continued through to hagiographic contemporary portraits of figures like Kobe and Tupac, citations and subversions of all-star works by Old Masters, and luscious nudes interrupted by cartoon angels.

ISAAC PELAYO: I found interest in art at a very young age in my career. I would say I knew I’d be an artist as early as five years old. Art was the only thing that spoke to me in a way I could understand and respond to.

My work is a reflection of who I am internally and all that interests me. It’s a combination of bits and pieces of the very things that make up my personality, good and bad.

Probably buying art because again nothing else seems to hold a conversation with more meaning and passion. I certainly lack the academic and scholastic skills to do or be involved in anything else.

I did go to school briefly at The University of Nevada Las Vegas. It was the only school I was accepted in and I quickly realized it wasn’t for me so I dropped out after two aching years.

I live in Los Angeles not only because I’m born here but because it stands as the art mecca of the United States. Creatively nothing else beats the energy and opportunity which resides here in this city.

I exhibited for the first time when I was around ten or eleven years old in a group show and contest in Riverside representing my elementary school district. I won first place.

My most recent show was my solo show titled BIRDS&BEES, January 2020, Gabba Gallery.

There are far too many to choose from but a few would be da Vinci, Rembrandt, Picasso, Kahlo, Basquiat, Hirst, and Koons.

I have to listen to music when I work. It is the key ingredient in the process of my art making. Music allows me to submerge myself into a mood much like a method actor. I listen to everything from classical music to hip hop and even theatrical soundtracks.