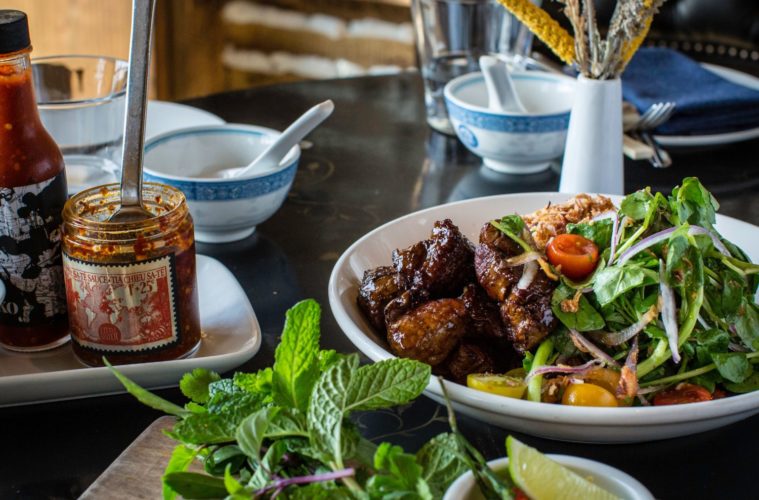 Little Sister, a trendy, chef-driven chain specializing in Southeast Asian cuisine with European attributes, has now opened a second location at the Irvine Spectrum. With just two locations in California, Little Sister is the brainchild of chef and owner Tin Vuong, a well-known San Gabriel Valley native and restaurateur.

“Little Sister has always been at the heart of everything we do and being able to open the newest (and largest) location yet is especially poignant after the tough year all of us have had,” Vuong said. “We can’t wait to see what the future brings us here in Orange County.”

“It’s all family tapas style,” he said. “Our star is obviously our hot kitchen, where you’re going to see all sorts of Southeast Asian influenced mainly Vietnamese food,” Abi-Najm said. “A couple knockout dishes — salt and pepper lobster, some traditional stuff that you see at every Vietnamese restaurant that we do best – the Shaky Shaky Beef — a sauteed beef tenderloin served with watercress salad and rice, it’s beautiful.”

Other notable menu items that should not be overlooked include lemongrass chicken wings and the SGV Banh Mi.

Abi-Najm has spent several weeks working alongside Vuong, ensuring everything is up to standard. However, he said the last year has been difficult, considering the opening at the Spectrum was considerably delayed.

“We were supposed to open this time last year. Obviously, with everything going on in the world we hit some setbacks, but we actually have Chef Tin here,” Abi-Najm said. “We’re doing some new dishes here, that haven’t been seen before at any other Little Sister — playing around with some stuff — taking our already elevated concepts, and trying to take it up a few notches for Irvine.”

“Chef Tin is a madman. He’s been here every day changing platings, just making sure it’s perfect. Making sure everything is A-Z, is up to his standards,” Abi-Najm explained. “I think being in an area so close to Little Saigon we really got to show people, and back ourselves up, as to why you should dine here, instead of driving up the freeway.”

For those unfamiliar with Chef Vuong’s approach to food, Abi-Najm attributes his tenacity to an unconventional cooking style, which he describes as “anti-conformist” when it comes to cooking.

“It’s no secret the hospitality industry took a hit, harder than any other industry this last year. We’re so happy to welcome everyone in with open arms — we’re all masked up and working with protocol — but it’s starting to feel normal again,” Abi-Najm said. “We are getting 50% capacity, so we have a semi-full restaurant which feels nice. It hasn’t felt that good in a while.”