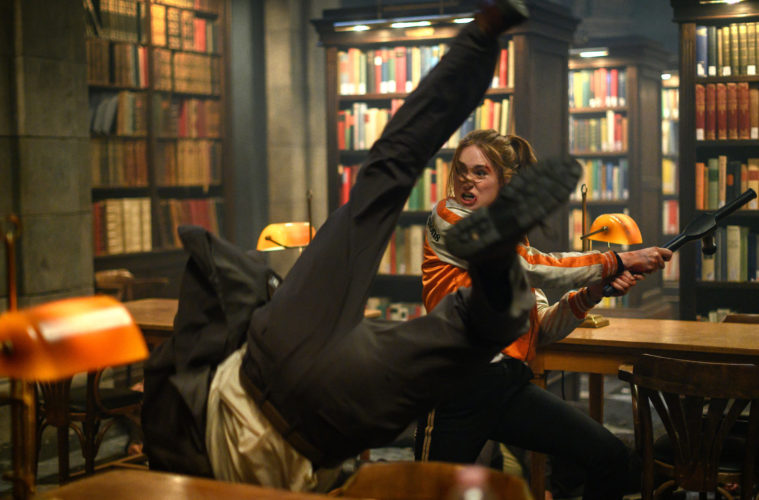 The set-up is basic: Karen Gillan is Sam, a hit woman-for-hire in Berlin. She’s sent to murder the son of a mobster and then threaten his accountant–only the accountant stole the money to pay for the ransom of his kidnapped girl, Emily (Chloe Coleman). After things go south, Sam and Emily are on the lam, ducking through parking garages and taking shelter with Sam’s mother, another killer-for-hire named Scarlet (Leana Headey).

You can probably guess what happens next. Bad guys are shot, bones are crunched, blood fills the screen, and a corporate overlord (Paul Giamatti) sends dozens of ringers to take out our mother/daughter duo. It’s Hitman Cinema 101, with all the fedoras, trench coats, vivid colors and silver bullets, laughable one-liners and Park Chan-Wook homages you’d expect from this sort of thing, just without the necessary inventiveness.

Gunpowder Milkshake is one of those films where the director (Navot Papushado) thinks casting women in generic action roles makes the action less generic. Take, for instance, a Wick-style underworld run by three tough/beautiful icons, Michelle Yeoh, Angela Bassett and Carla Gugino. All the girl power in the world can’t save them from feeling like tired sidekicks, as the trio joins Sam and Emily.

Papushado pays tribute to Wick’s choreography with a long, insane fight scene, filmed in uber-cool, slow-motion shots lasting over ten seconds. It goes up and down stairwells, in and out of bookshelves, into hidden passageways and across pools of blood. It’s a remarkable feat of action, performance by Gillan, and physical endurance on the part of the camera operator. It’s also soundtracked to “Piece of My Heart,” with Janis Joplin’s earth-shattering voice blaring on the speakers.

Unfortunately, the film (currently in Netflick’s Top 10) can’t keep that same energy. After a brisk, bare-knuckled first act, all neon lights and mesmerizing slow-mo, the second act drags into feminist sermonising. The narrative momentum is sucked dry faster than the title’s milkshake, and none of the coldly delivered speeches pack a dramatic punch. Aren’t we past the point where women ragging on men is considered progress?

Wouldn’t it be a whole lot cooler if these women were allowed to forge their own paths, without all the riffing on other movies? Sure would. But directors still think it’s novel to cast women in male roles.

It’s time we let women kick ass their own way, on their own terms.