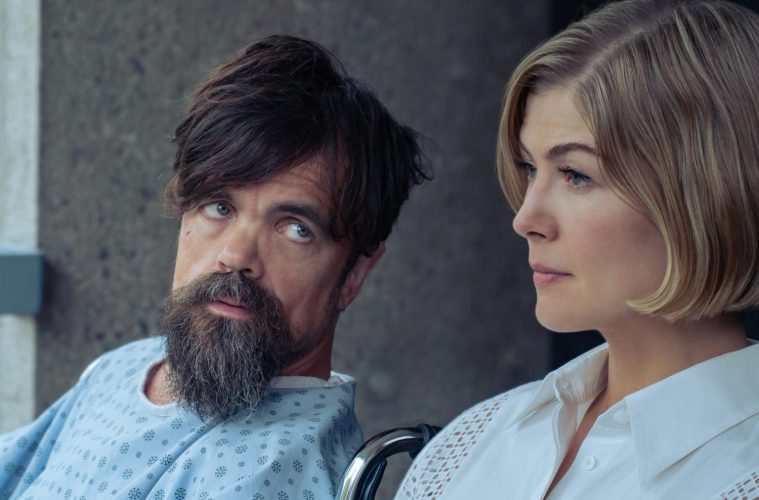 L.A. WEEKLY CRITICS2月 25, 2021
L.A. Weekly’s Movie Guide is your look at the hottest films available on your TV sets, electronic devices and in select drive-ins throughout Southern California. L.A. theaters remain closed, but there’s no shortage of diverse and engaging films to see at home. And as always, our film critics let you know what’s worth the watch time and what’s not — from indie art house gems to popcorn-perfect blockbusters to new movies garnering buzz. Here are some the biggest titles that came out in February, as reviewed by Asher Luberto, Chad Byrnes and Lina Lecaro.

I Care a Lot / Netflix

There’s something of a charade going on in the title of I Care a Lot. It’s not that the protagonist of this smart, bleakly comedic film doesn’t care, it’s that she doesn’t care about other people, their problems, or their loved ones. She just cares about their money.

Rosamund Pike stars as Marla Grayson, a caregiver and con-artist who steals money from her patients. In pink lipstick and too-tall-heels, with a convincing smile, she seems nice and innocent, going along with her good-girl routine until she drops the act and bleeds her victims dry. It’s made her a lot of money over the years, but it’s made her a lot of enemies, too. When she picks a fight with the wrong grandma, Jennifer Peterson (Dianne Wiest), she winds up in a standoff with the Russian mafia, who aren’t messing around when it comes to enacting revenge.

J Blakeson’s film isn’t all that violent, but it has the attitude and tone of a crime thriller, rendered in turquoise colors. Marla utilizes her ultra-rich presentation of long blonde bangs, dresses and Ray Bans as armor, a disguise, and as a weapon in war. It’s how Marla sets up her operation, drawing her victims in before they can see what’s hiding under the (masc)ara.

Every stylistic choice, from the pitch-perfect production design by Michael Grasley to the lush compositions of cinematographer Doug Emmett, mirror our leading lady and her actions. The synth heavy, arpeggio-laden score assists in the tonal swings that playfully jump from irony to horror to exploitation, as Marla does. She code-switches with ease from warm banter to vicious, glamorous, Beverly Hills gold digger, and Pike makes her a character you wish you could reach out and strangle. Most people would take that as an insult. Marla? She could care less.

There is something oddly charming about characters who live by outdated principles and would probably be better off existing in a bygone era.

Now we have French Exit, in which Michelle Pfeiffer plays Frances Price, a wealthy widow who’s squandered the last of her inheritance and impulsively sells her belongings to live in Paris with her cat, Small Frank, and glum, impassive son, Malcolm (Lucas Hedges). Pfeiffer breathes life into someone that could’ve been a glorified caricature, embodying the character with a cold bemusement as if the world were a tiresome exhibit she must endure with a cigarette and martini.   Directed by Azazel Jacobs and adapted by Patrick DeWitt from his novel, French Exit is unapologetic in its detached tone and portrait of absurd socialites.

In Paris, Francis and Malcolm encounter a cast of equally oddball characters as they drift in and out of an existentialist haze. With its soft focus and bleak narrative, Exit feels like a Camus novel filtered through a satirical lens. Some will take umbrage as she slowly gives her money away in an almost suicidal malaise. It’s almost as if she’s creating an abyss for herself she’ll never crawl out of.

When she first meets her son’s fiancé (Imogen Poots), Frances groans, “Ah, to be young-ish and in love-ish” with a wry languor that’s almost flawless in its detachment. She only seems to care about her son and her cat, who she claims inhabits the soul of her late husband. Unfortunately, the film loses steam by favoring sentiment and awkward moments over screwball comedy; specifically, there’s a scene involving a séance that belongs in a different movie altogether.

In the end, French Exit is a fun albeit frustrating experience. Its struggle to inhabit both drama and satire reminds us of why Wes Anderson and Whit Stillman are so talented. Still, Pfeiffer’s deadpan performance shimmers and her character conveys antiquated cynicism with a unique charisma we don’t see anymore. (Chad Byrnes)

Director Fisher Stevens’ feature debut Palmer, written by Stevens and Cheryl Guerriero is a lot like its taciturn protagonist, Palmer (Justin Timberlake), in that it’s more concerned with fitting in than being individual. The storytelling is formulaic, deliberately familiar, and prosaic, sometimes frustratingly so.

Palmer is a sad, quiet man who has spent the last decade in prison and returns home to live with his grandma, Vivian (June Squibb). He’s got the ex-con beard and hoodie and thousand-yard-stare, but his life changes when he finds himself babysitting Sam (Ryder Allen), the child of a heroin addict next door. Sam isn’t like the other boys–he plays with barbies– which means Palmer is going to have to teach him a thing or two about being a man.

This cute kid/tough guy dynamic is one we’ve seen a million times before, but the sentimental tropes aren’t given enough life or breath here. It’s nice to see Palmer embrace Sam for who he is, warts and quirks and all, but it takes nearly two-hours to get there, and everything that comes before is as cruel and conventional as Palmer himself. (Asher Luberto)

There’s a chance that a few minutes into Nicholas Jarecki’s Crisis you might experience a sense of déjà vu, particularly from the year 2000. If you think to yourself, “ Hmm,  this movie is kind of like Traffic,” don’t worry, you’re not going crazy. This is a direct rip-off of the Steven Soderbergh classic, on an almost embarrassing level. As you might remember, Traffic told several different stories  using the illegal drug trade from Mexico as a backdrop. The plot followed several players, from a politician and his drug addicted daughter to a Tijuana cop grappling with a test of morality.. Traffic pioneered cinematic storytelling and garnered three Academy Awards for director Steven Soderbergh, supporting actor Benicio Del Toro and screenwriter Stephen Gaghan.

Crisis takes its structural cues from Traffic, intertwining several stories within a framework about the drug trade (in this case the U.S.’s rising opioid epidemic). Although both movies have a similar composition, tonally at least, they’re miles apart. While Soderbergh seamlessly shifted between narratives by utilizing color schemes and a handheld camera, resulting in a documentary-like slow burn, this film is a hodgepodge of dramatic flourishes and muddled exposition.  It aims for rugged authenticity, but comes off as pure melodrama.  The three revolving stories include: Evangeline Lilly as a recovering opioid addict who hits the streets to find out what happened to her missing son; Gary Oldman as a conflicted university professor hired by a large pharmaceutical company to put his stamp of approval on a questionable painkiller; and Armie Hammer (yes, the guy who’s been making headlines in all the recent gossip columns) as a DEA agent who gets in over his head regarding a drug deal with an Armenian syndicate. These tales ping-pong between each other. Sometimes they pop, other times, they wither in paralysis.

Director Nicholas Jarecki (Arbitrage) has some skillful masterful chops and keeps the pace moving with a fluid rhythm. The acting is effective, especially Oldman (then again he could star in a movie where he sits in a room and drinks beer and it would be engaging). The main problem is the script. The stories simply overwhelm themselves. You forget who did what and why and after a while you just don’t care. Each narrative contains too much exposition, which is dangerous for a movie that has three simultaneous stories. Traffic’s greatest asset  was the simplicity of its storytelling. Soderbergh realized that if you left exited one story, it had to still be digestible when you returned to it. When Jarecki pulls away from a narrative regarding an Armenian syndicate and plunges you into a debacle regarding pharmaceutical politics, you have to recalibrate yourself. You can might be able to follow these narratives, sagas, but you’ll lose some a little of emotional currency along the way.