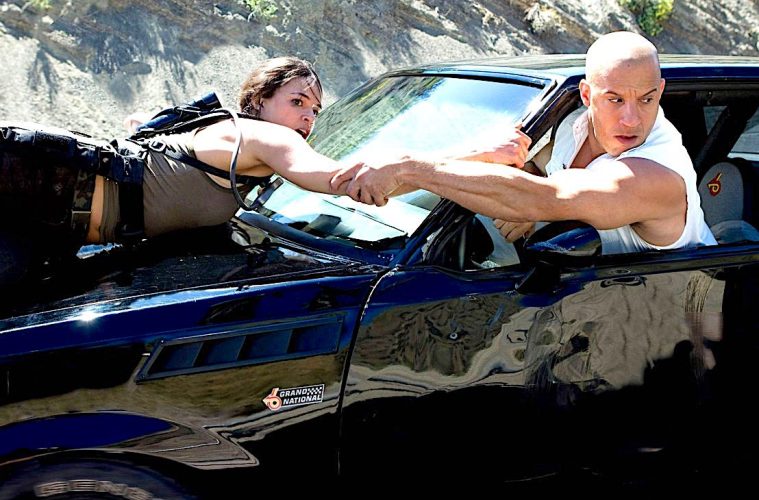 The films in the Fast and Furious franchise –somehow on its ninth installment– are nearly impossible to dislike. They may not always be good, but they are guaranteed to be exciting.

Diesel returns as Dominic Toretto, who has risen from the Los Angeles street racing scene to become an international driver specializing in the extraction, transportation and delivery of highly classified materials. He’s living off the grid with his wife, Letty (Michelle Rodriguez), when a message sends them on another mission. They team up with Roman (Tyrese Gibson), Tej (Chris ‘Ludacris’ Bridges), Ramsey (Nathalie Emmanuel) and Mia (Jordana Brewster), then go up against their scowling nemesis, Jakob (John Cena of WWE fame).

At first, it seems Lin might be grounding things in a more dramatic world this time– he doesn’t open with sky-diving cars, but rather, on an exposition dump that introduces Dom and Jakob as brothers. It’s a gut-wrenching moment, a run-down on their sibling rivalry. But then all drama is left in the dust. The next scene involves a high-speed chase in Thailand, featuring tanks, fighter jets, Ferraris, machine guns, vast expanses of jungle and electric blue water, along with the aforementioned cliff jump.

The rest of the film centers on Jakob’s end-of-the-world operation, and the final hour is essentially one big stand-off between Dom and his team and Jakob and his team, including Thue Ersted Rasmussen and Charlize Theron (who shows why action movies are becoming her forte of late, fleshing out her femme fatale with steely glances and muscular stunts). She’s the latest in a long line of empowered female warriors in the franchise, a counterbalance to Rodriguez’s good-girl, badass heroine.

Dom stands out among these jocular characters, and “unfazed” doesn’t begin to describe his ability to stay cool, calm and collected in the face of danger. Diesel has cornered the market on performances that are stoic and reserved, and that’s all Lin asks of him in

Title cards like “London” and “Edinburgh” lend a sense of playfulness to Lin’s globe-trotting adventure, executed with a brawny, bombastic chutzpah. The plot is basically an excuse to jump from one place to the next, so to delve into the details would be a waste of time, and the film is far more engaging when all semblance of narrative is thrown out the window.

Besides, action movies don’t need storylines, so long as they wow us. The best moments in F9 are the ones where Diesel is driving off a cliff or Cena is zipping through traffic in London, followed by what seems like half the city’s police squad. The next installment, Fast 10: Hang on to Your Seat Belts (or whatever they’re going to call it), is going to have a hard time topping this ballet of bombast.