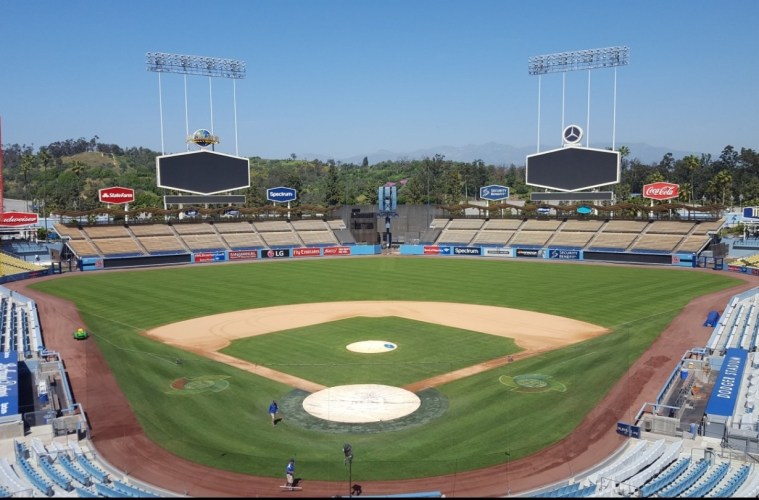 Dodger Stadium To Become A Mass Vaccination Site This Week

Isai Rocha1月 12, 2021
The city of Los Angeles announced that Dodger Stadium would be one of several mass vaccination sites opening across California.

Dodger Stadium previously served as the country’s largest COVID-19 testing site, administering up to 10,000 tests a day, but will now be transformed into a vaccination site for those who qualify in the current tier.

Los Angeles Mayor Eric Garcetti said the expectation is to vaccinate up 12,000 people per day.

“From early on in this pandemic, Dodger Stadium has been home base for our testing infrastructure, a vital part of our effort to track the spread of COVID-19, try to get ahead of outbreaks, and save lives,” Garcetti said in a statement, Monday. “Vaccines are the surest route to defeating this virus and charting a course to recovery, so the City, County, and our entire team are putting our best resources on the field to get Angelenos vaccinated as quickly, safely, and efficiently as possible.”

The distribution of vaccines in California is currently in “Phase 1A,” which prioritizes healthcare workers in three tiers, all of whom can make appointments at the stadium, and 74 other L.A. County locations, as of Monday.

To date, L.A. County has administered 180,174 vaccine doses to healthcare workers, with more than 25,000 of those being a second and final dose.

L.A. Public Health believes that it can vaccinate more than 500,000 healthcare workers by the end of January.

After Phase 1A has been completed, Phase 1B will begin in February with persons who are 75 years old, or older, along with workers in education, childcare, emergency services, food and agriculture.

Tier 2 of Phase 1B will include those between the ages of 65-74, as well as those in transportation and logistics, industrial, commercial, residential, and sheltering facilities and critical manufacturing. Also in in this tier will be those who are incarcerated or experiencing homelessness.

Phase 2, which has only been proposed, would consist of the rest of general population between from ages 16-49 and who do not have high risk medical conditions. This final vaccination phase is projected to begin in Mid-may or June.

On a statewide level, 2% of eligible health care workers declined or postponed having the vaccine administered, which Gov. Gavin Newsom said, “flies in the face of some of the national data that’s come out that there’s a large percentage of people.”

The governor also said that 2,466,125 doses have been shipped to California with the intention of vaccinating 1 million California by the end of the weekend.