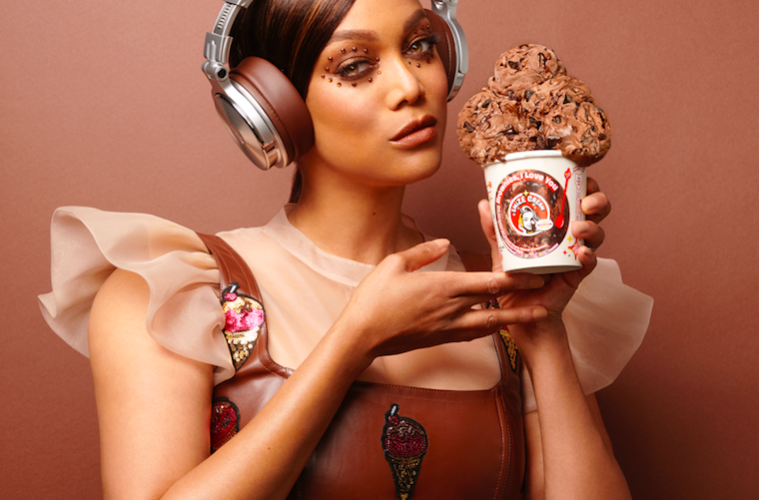 Her business maneuvers are as strategic as her steps on the catwalk and her latest labor of love has been 15 years in the making – a line of SMiZE Cream frozen custard and a newly opened whimsical sweet shop on the ground level of Santa Monica Place.

Each ice cream flavor comes in limited-edition individually packaged servings, complete with a unique AR activation per ice cream flavor that happens right on your cup. The crazy mixed-up flavors are all inspired by ice cream memories of family members and friends over the years, including a major driving force in the Inglewood native’s life – her mother Carolyn London, who is immortalized on the front of the shop as the fictional DJ Splitz character. The name comes from the model technique of “smiling with your eyes.”

“Ice cream has been an obsession with my family and my mom and we have bonded over ice cream to this day still, Friday night after school was our thing – homework done, dinner done, we’d get into the car and drive to Hollywood. I’d always have three scoops of coffee ice cream and we’d sit in the car and talk about anything and everything – boys, my friend who was starting to drink alcohol. It just became a ritual and we talked about dreaming big.”

The obsession never subsided, even when she began modeling after graduating from Immaculate Heart High School in Los Feliz and more recently when she graced the cover of the Sports Illustrated Swimsuit Issue in 2019, 22 years after being the first black model to make the issue’s cover.

“When I was modeling in Paris after graduating from high school, before technology, I had all of my auditions and castings in a book,” says Banks. “You’d call your agency and they’d give the addresses of everywhere you had to go over the phone – about 15 a day. In the front of that book I had the address and Metro stop of every Haagen Daz in Paris.”

From the creative side to the business side, Banks has been hands-on during the process of development, often waking up at 3 a.m. to make sketches of what the Willy Wonka-inspired shop should look like. She enlisted the help of Dr. Maya Warren, an Ice Cream Scientist with a Ph.D. from the University of Wisconsin at Madison in Food Science, specializing in the microstructure, sensorial and behavioral properties of frozen aerated desserts. She is also part of the winning duo from season 25 of the Emmy Award-winning reality show, The Amazing Race (alongside her friend and former lab mate, Dr. Amy DeJong). She worked in research and development for Cold Stone Creamery as well.

“Tyra and I are like two peas in a pod when it comes to creating a new flavor,” says Warren. “We bounce ideas off each other while I’m in the test kitchen and she’s tasting everything I make. We were tasting ice cream samples last night until 11 p.m. She is taste buds on and has traveled to all the factories where we’ve produced SMiZE Cream as well as the cookie dough surprise inside. It took us a while to get the texture just right.”

Banks also credits the nuns at Immaculate Heart for her drive and fearlessness. A documentary on the order came out in June. Rebel Hearts takes a look back at 1960s Los Angeles, where the Sisters of the Immaculate Heart of Mary fight for equality, their livelihoods, and freedom against a powerful cardinal who tries to keep them in their place. Banks gave the commencement address at this year’s graduation at the Hollywood Bowl, where the students from the all-girls school ascend the stairs in white gowns holding single red roses to accept their diplomas.