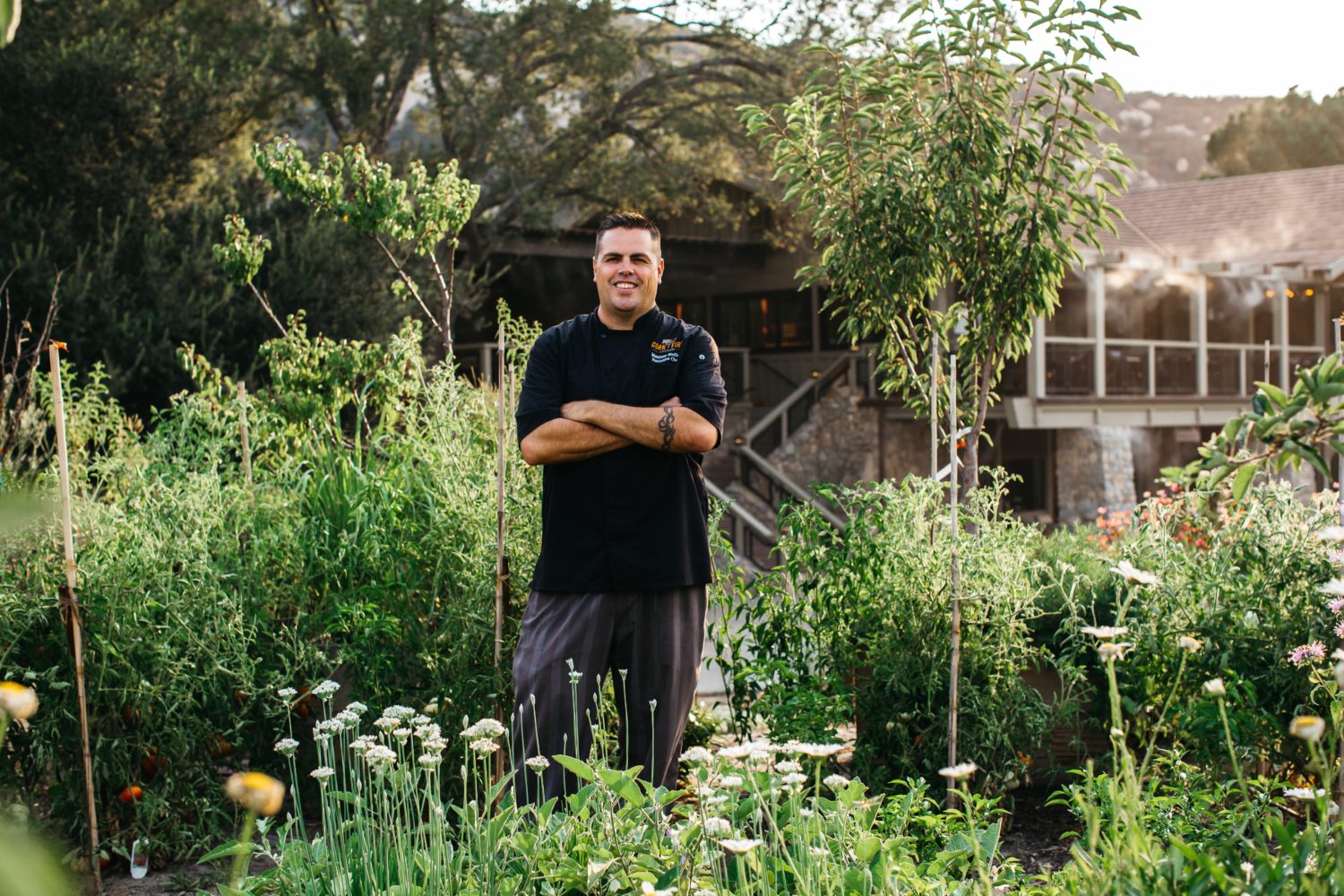 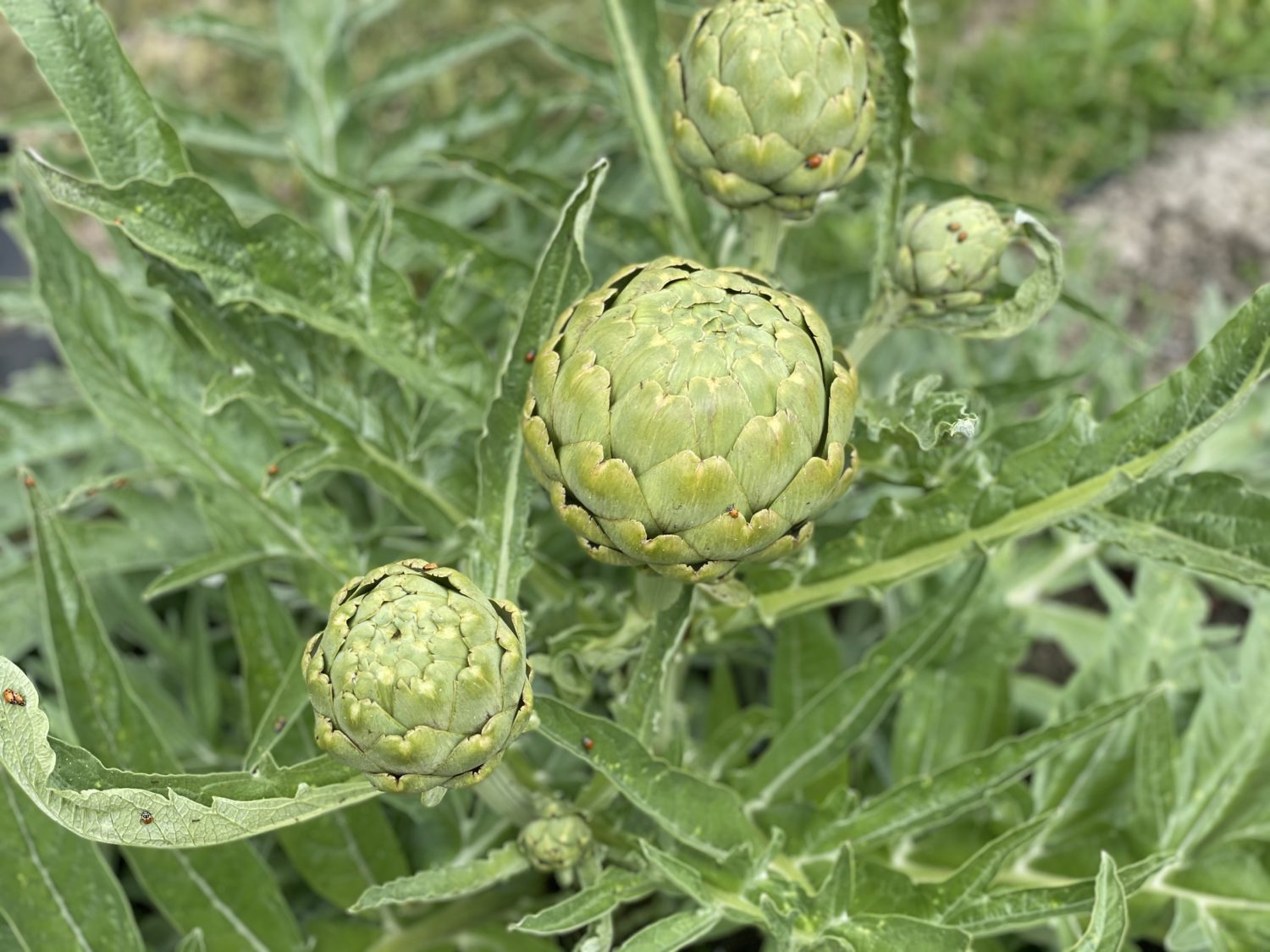 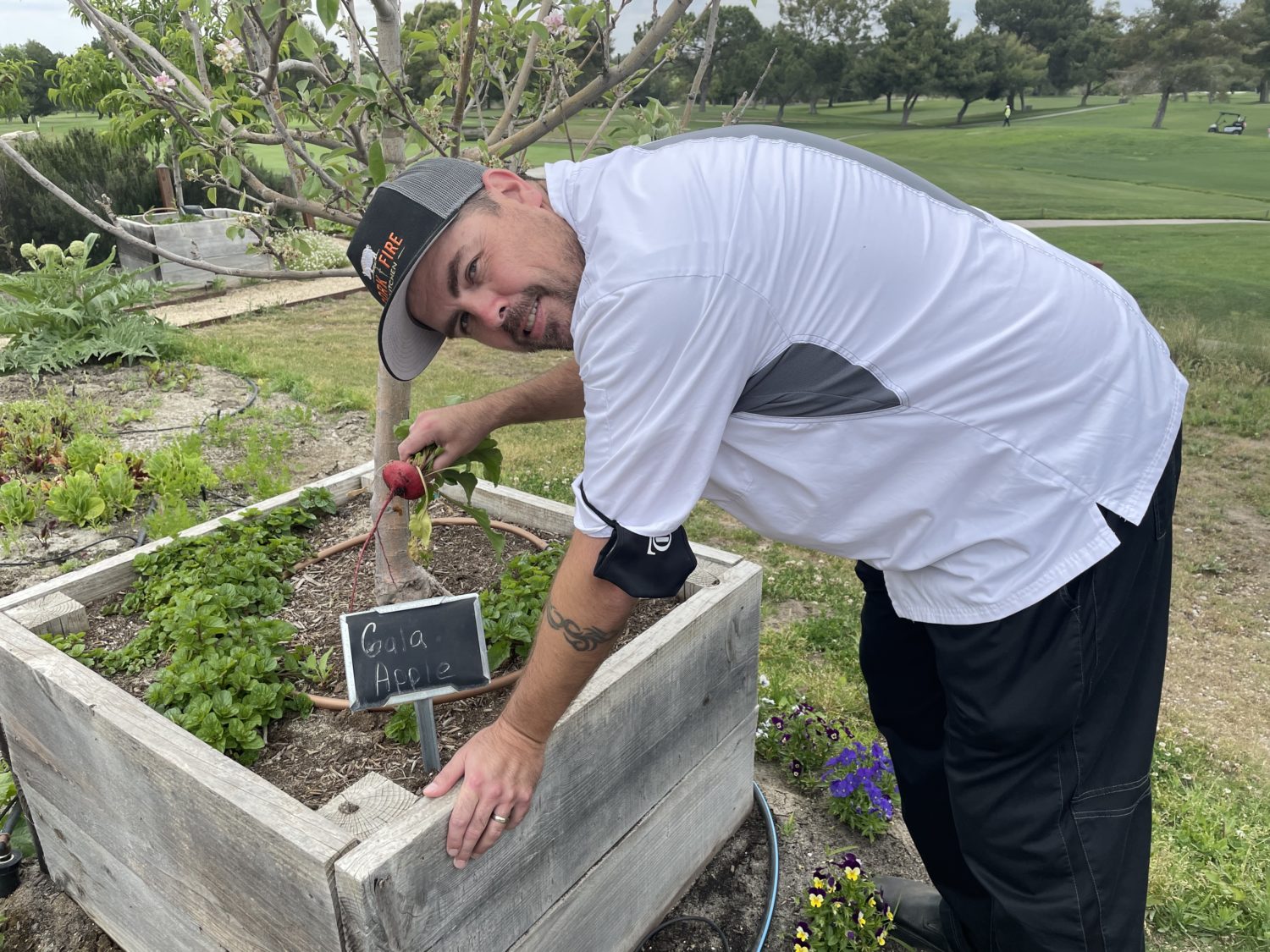 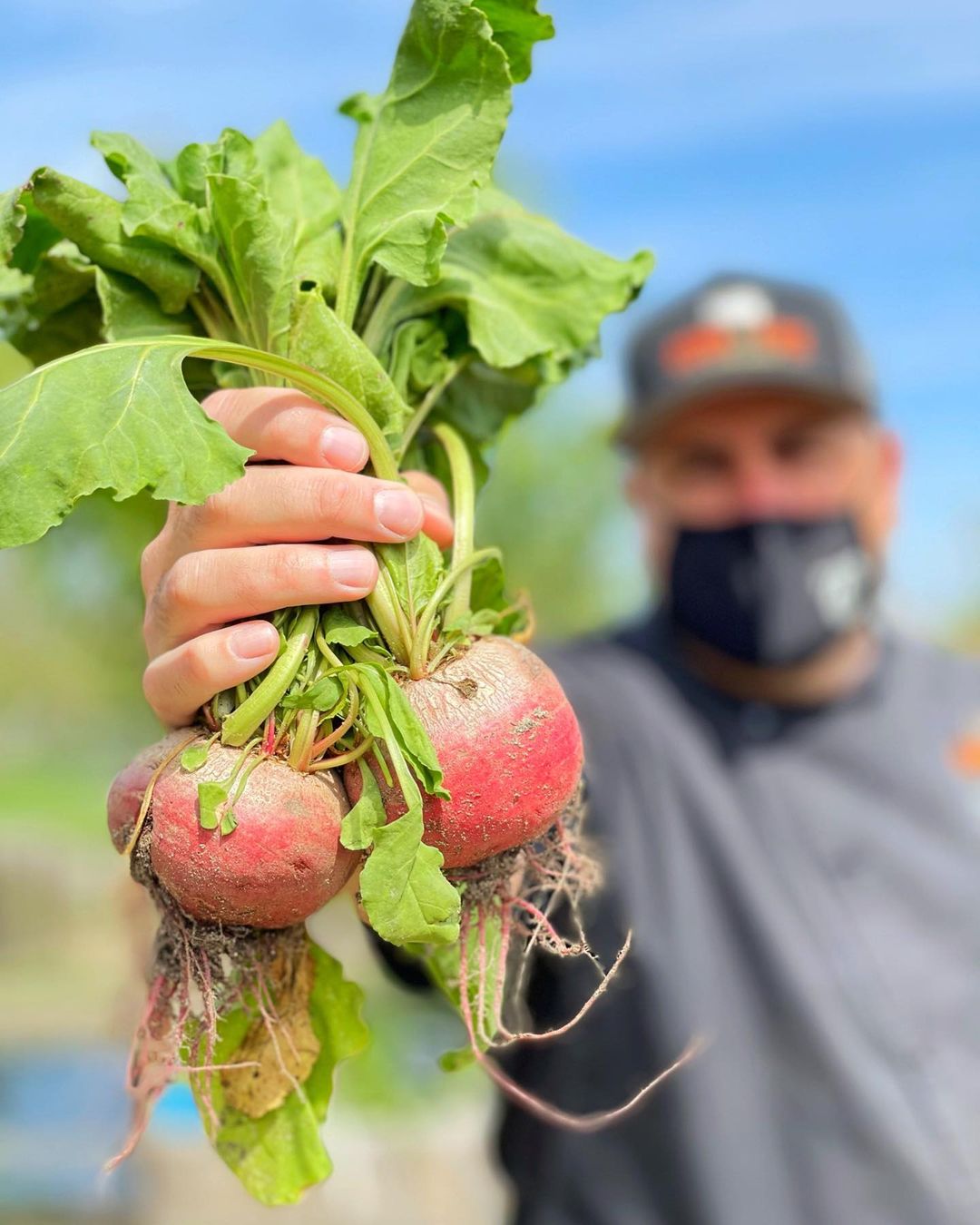 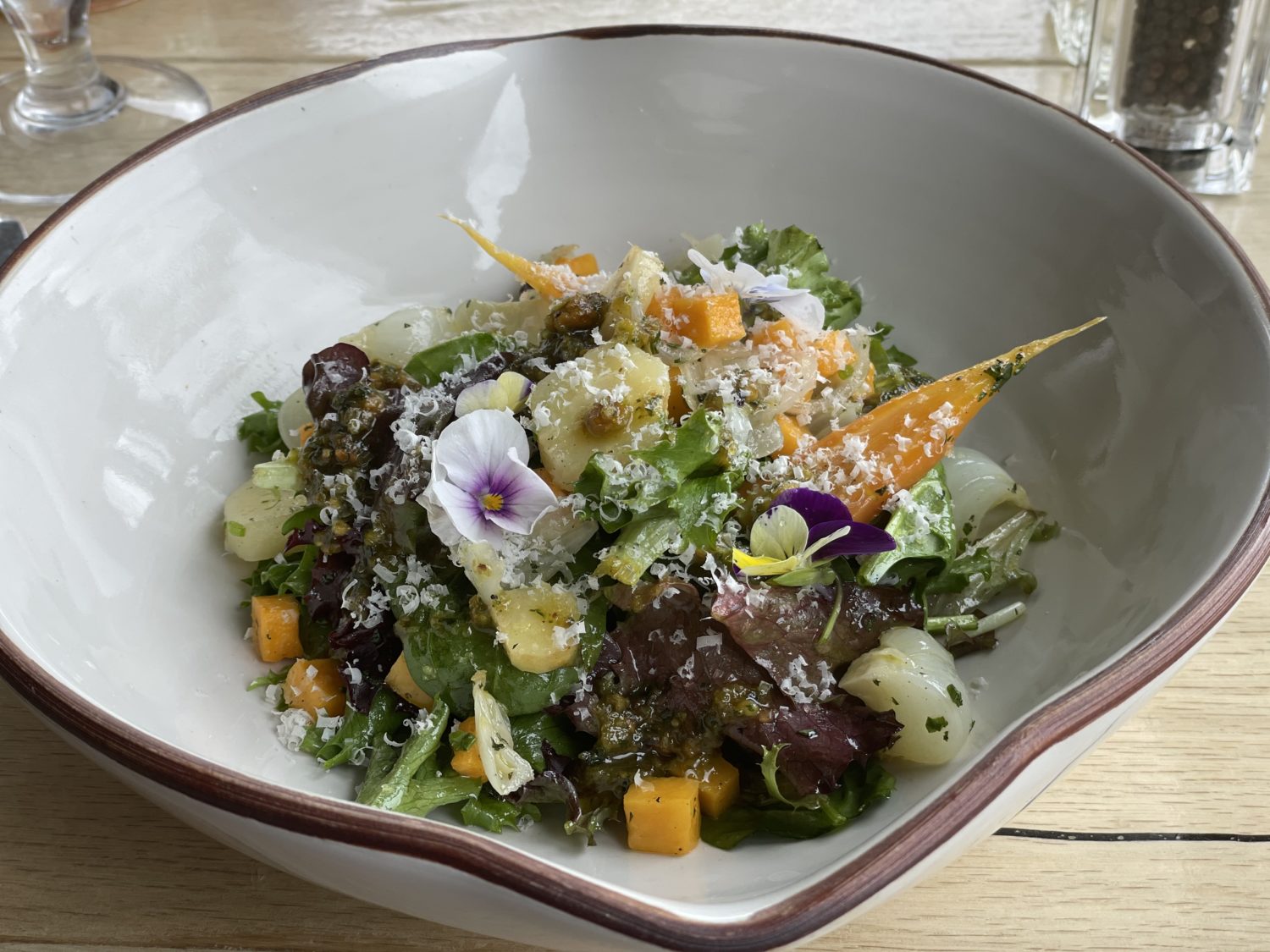 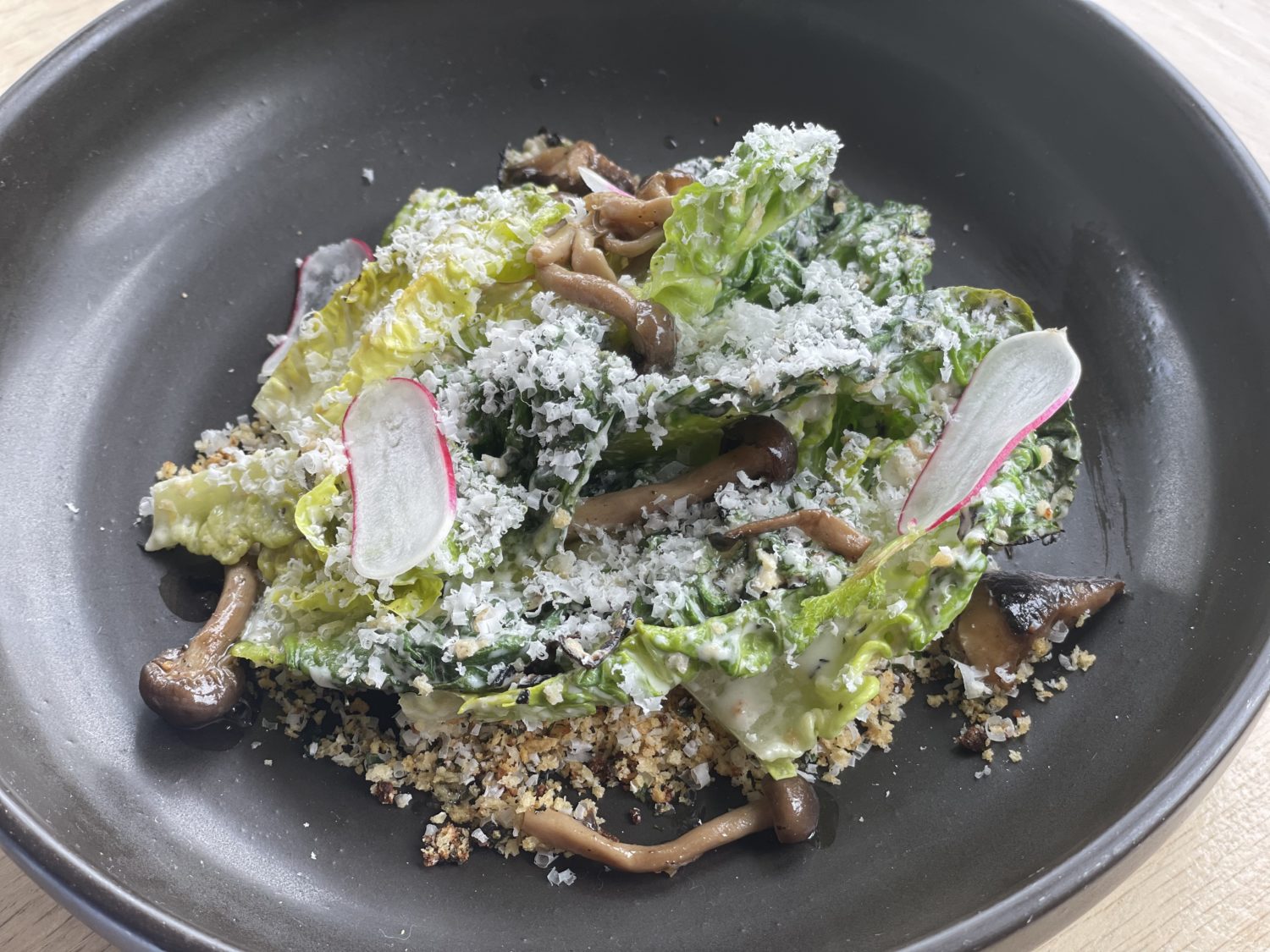 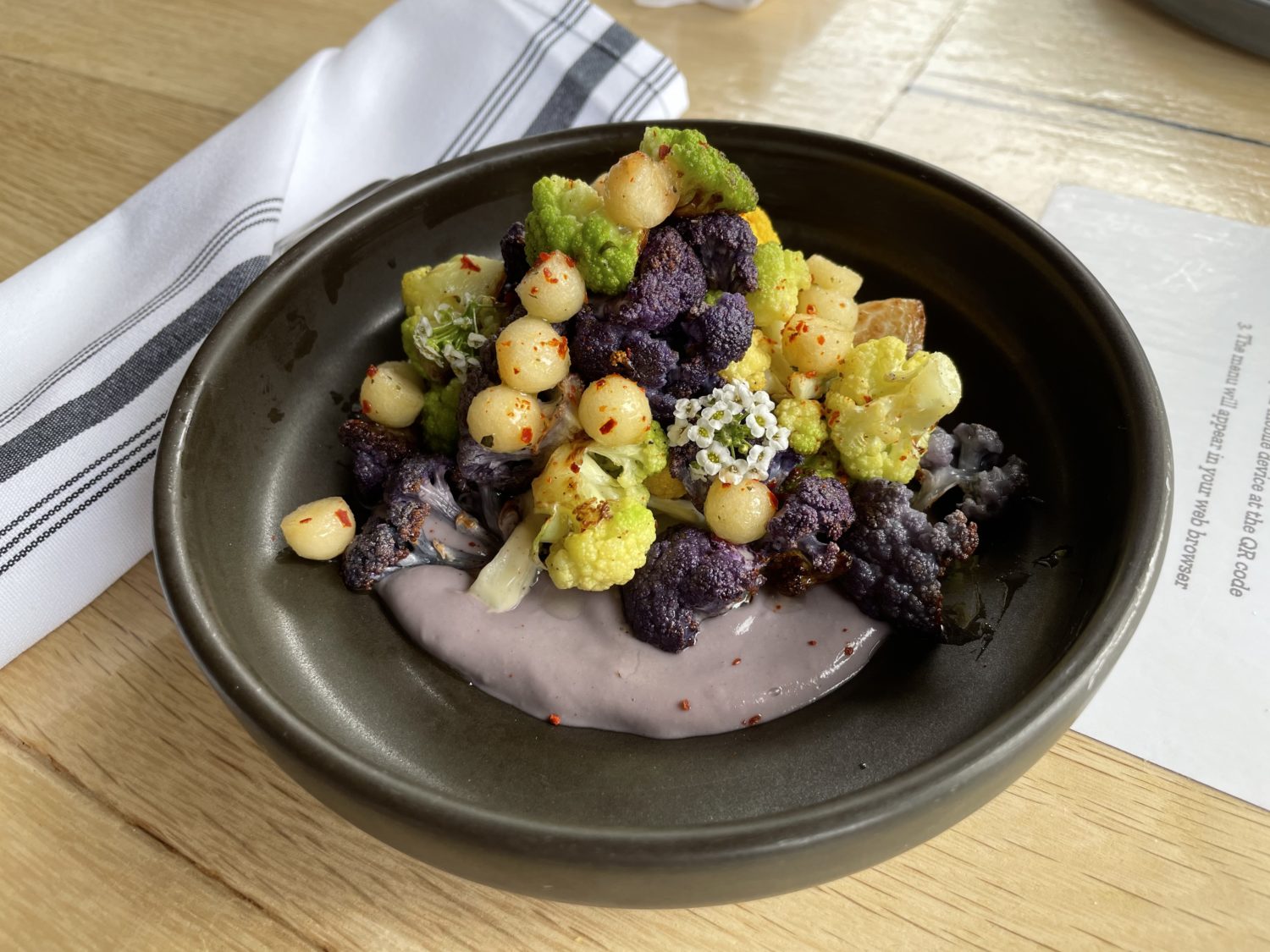 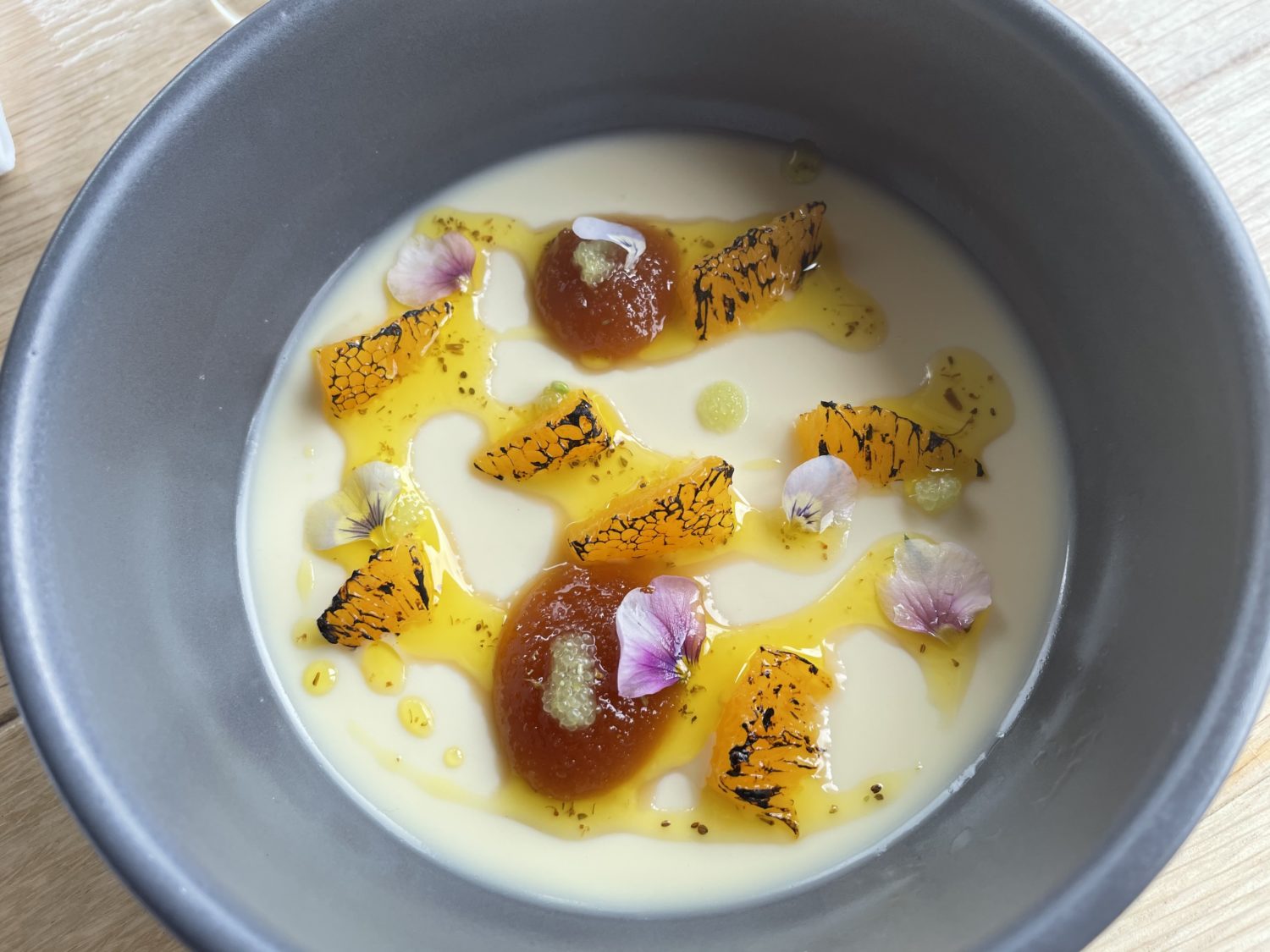 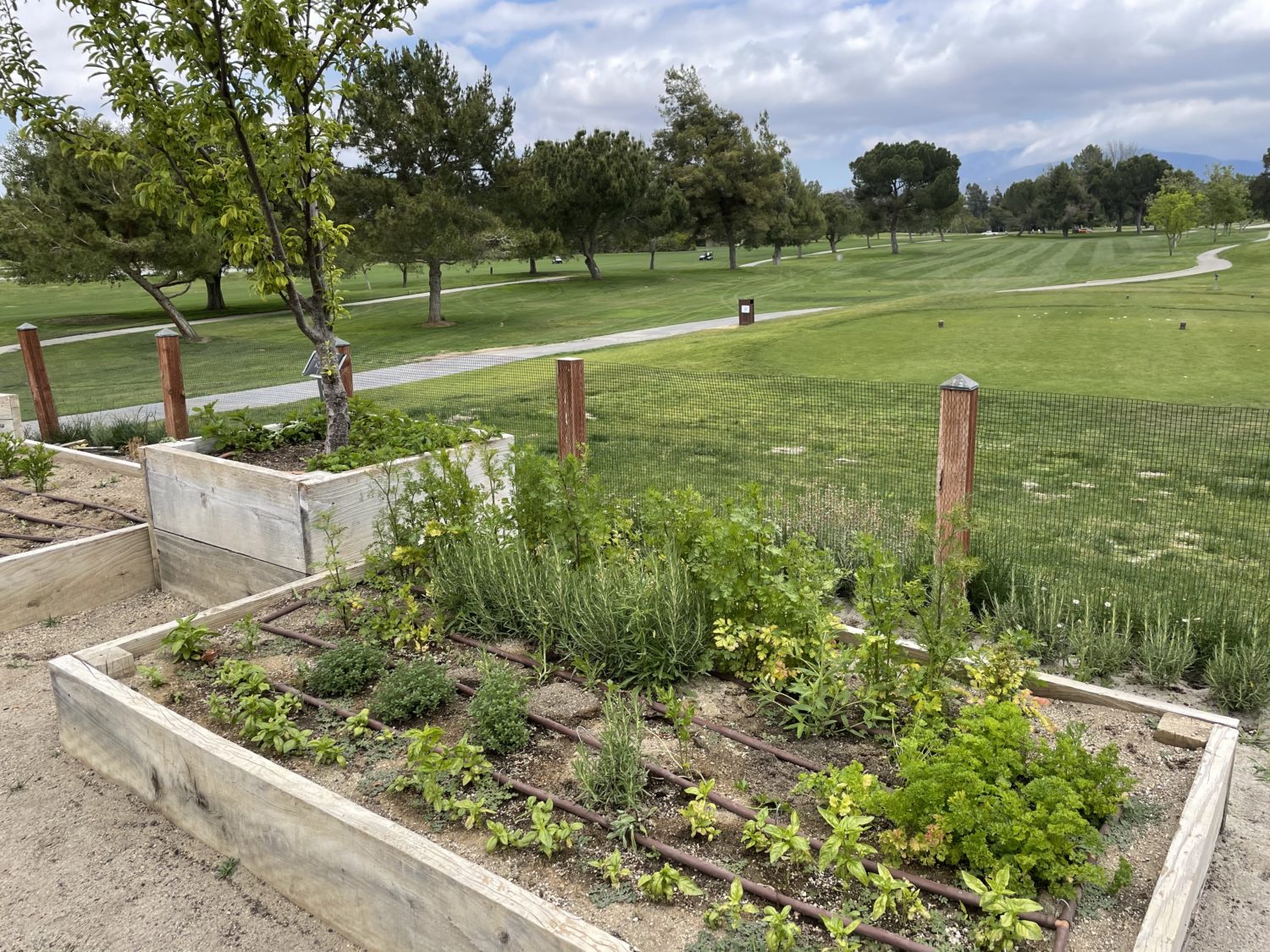 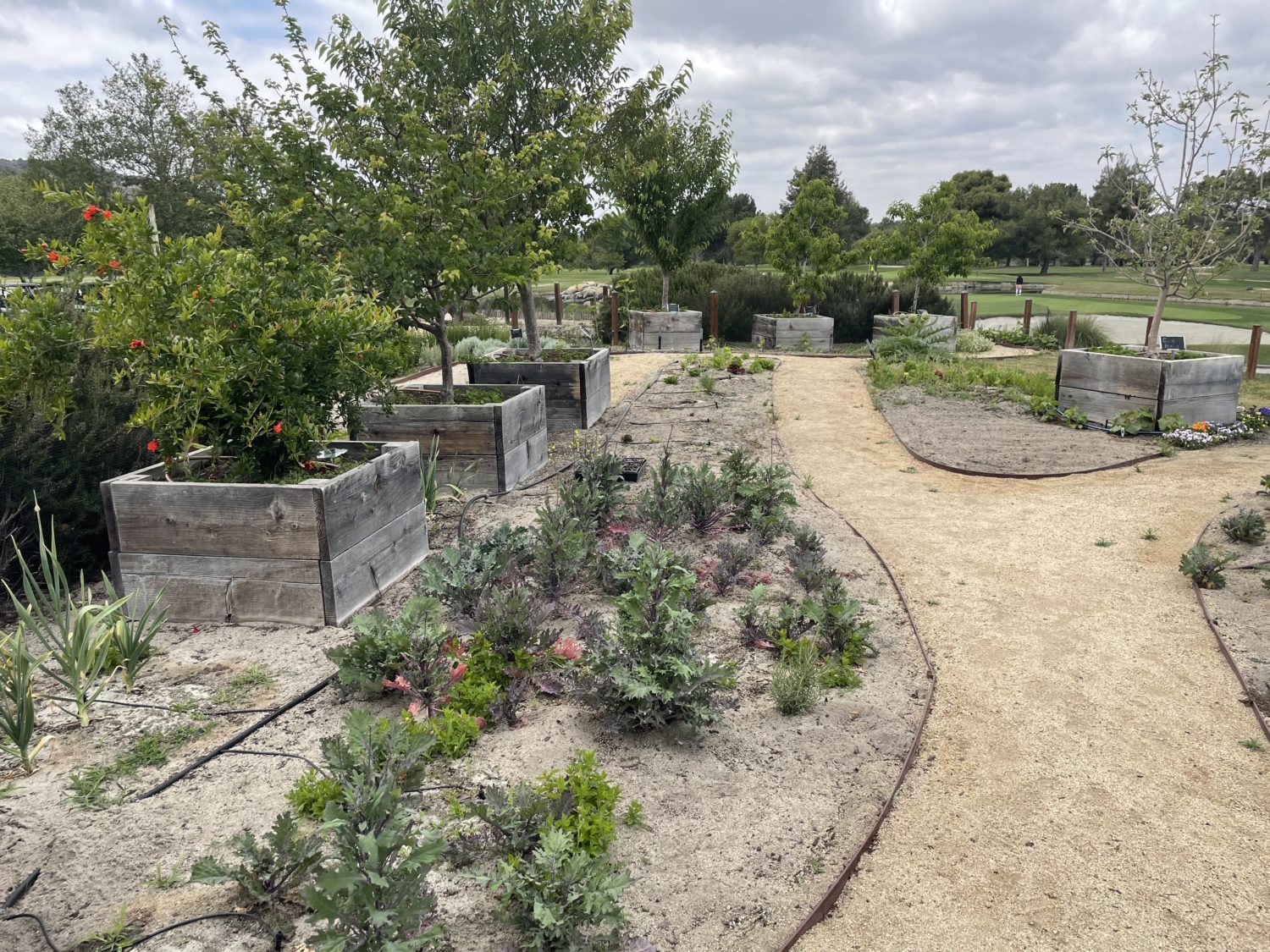 The Temecula Creek Inn has reopened in the Riverside County wine valley and Chef Matt Steffen’s new menu at the hotel’s Cork Fire Kitchen is a riot of spring color and a loving homage to his 900-square foot organic herb, vegetable and fruit garden on the property’s golf course. 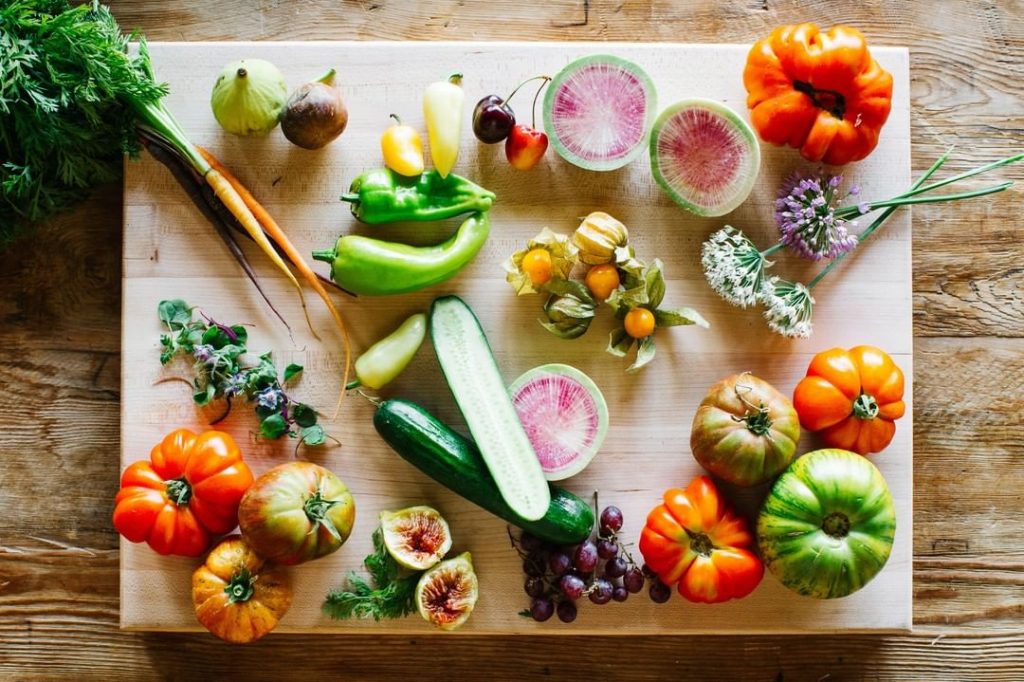 Steffen surveys the garden on the green each morning, determining menu creations such as grilled baby romaine with miso Caesar dressing, ponzu, parmesan and bread crumbs, butternut squash bisque with lobster, chilled wild gulf prawns with smoked piperade made from the garden’s peppers, pancetta pesto, baby beets, Calabrian chile and shiso. Carrots and beets grow year round in the garden.

“Our garden regenerates itself naturally,” Steffen tells L.A. Weekly as he plucks some green garlic from a raised bed. “There’s one fennel plant left over there. Whenever we go to harvest I always leave one plant in the ground that will produce enough seeds that will drop for the whole bed, so the next time fennel’s in season, that will all just sprout up. We have beets shooting up everywhere. We let a lot of things go to seed and the vegetables just replant themselves. Peppers are in the fennel space right now.”

With the help of the golf course’s groundskeeper, everything starts from the garden’s own seeds. Carrot and beet seeds get sprinkled randomly every month. Curry leaves, which are used for teas and broths, are all over the garden. Seeds from the sunflowers are used in the risotto and delicate edible flowers for garnish dot the terraced space.

But an organic garden comes with its challenges, like combatting bugs and gophers.

“The remains of my romaine are over here where a gopher was at it this morning,” says Steffen, who has been cultivating the garden for three years and gives educational tours to culinary students. “You know they’re under there because the lettuce starts shaking, they eat it from the roots under the ground. We’ve got some traps that emit noises they’re not supposed to like, but they still come and we’re able to do what we need to do. We don’t have to harm them. They help aerate the ground. They don’t go under 18 inches, so we’ll dig it up and put a border in there.” 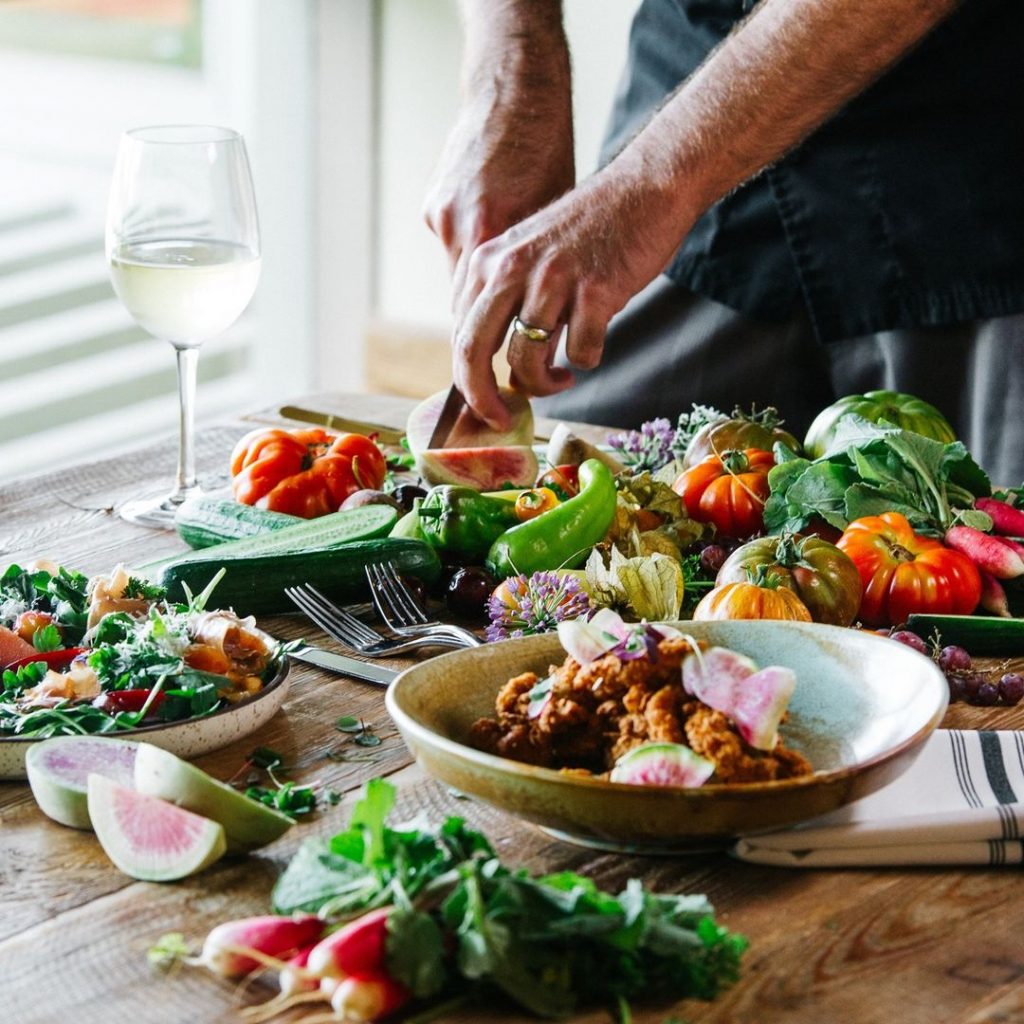 “We try to attract good bugs that will keep the bad bugs out,” the naval veteran says. “I have to wrestle with some of the horned worms on the tomatoes sometimes, my biggest nemesis. I just pick them off and get rid of them. We keep artichokes here because they collect water and keep the ladybugs around. They have so many crevices where water gets trapped. As long as they have a water source and a food source – ants who carry in aphids – the ladybugs will stick around. They attack a lot of the things that we have to fight off. We’d rather lose a box of tomatoes than use some sort of non organic spray. Just clear them out and get rid of them if they’re full of bugs. Rumour has it that rosemary keeps gophers away, but rumours aren’t always true. We planted it all over the garden. It doesn’t phase the gophers, but when it blooms it brings in a lot of bees which help pollinate the garden.”