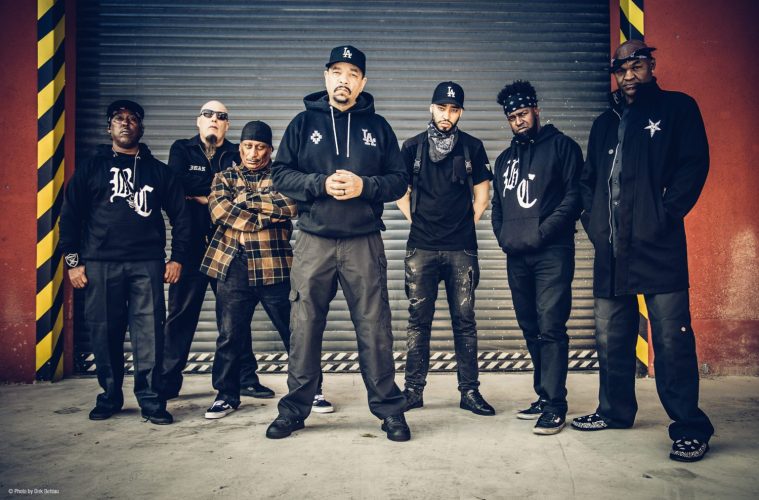 Body Count’s Still in the House

It’s been a full three decades since Ice T threw his hat into the rock/metal ring with his heavy duty outfit Body Count. The debut album made tidal waves worldwide, thanks in no small part to the song “Cop Killer.” Here we are 30 years later, the world burning around us, and the anti-authority sentiments in that song are as relevant ever as we’re still seething from the deaths of George Floyd and Breonna Taylor among others.

Thankfully, Body Count is still a going concern. Not only that, they’ve just received a Grammy nomination for the track “Bum-Rush” from recent album Carnivore. In 2017, they received their first ever nomination for the song “Black Hoodie” (a tribute to Trayvon Martin) from the album Blood Lust. So they’re on a roll, and they have quality as well as longevity going for them. Ice T isn’t surprised that they’re still kicking it.

“I thought we would be going for a long time because Ice T’s been going for a long time and I never really got into music to make one record or album,” he says. “Most people get in and they call it a music career, so you feel like you’ll be doing it forever. I’ve watched George Clinton and I’ve watched James Brown and I’ve watched my idols like Ozzy still on stage. I mean, Mick Jagger’s still on stage. I knew if I made a good, solid catalogue that this could go on. Unfortunately, Body Count lost so many members. We lost three original members. At many times we thought it was over but the fans didn’t want it to stop. We’re still here.”

T believes, not inaccurately, that the band has evolved with time into a chunkier, harder project. People will always look back with nostalgia-tinted spectacles at that early material, but they’ve gotten heavier, at least sonically, with each record. The challenge, as with Rage Against the Machine, is making sure that the metal fans moshing to the music are also listening to the lyrics.

“A lot of people in the United States don’t live in the urban communities where they have violent police,” he says. “They don’t know, so it just sounds like people are making this stuff up. It almost sounds too outrageous to be real but I think recently with the introduction of camera phones people are finally seeing what we’ve been talking about. I don’t think they weren’t listening. I just think that they didn’t believe. Now, when you see little girls beat down by the cops during protests you’re like, ‘Wow! Little white girls are getting beaten down. Wow. This shit is real. They are beating these white girls down. Imagine what they are doing in the hood.’ Sometimes it takes a while for shit to sink in. I think, finally, the words from the first album are starting to sink in.”

Carnivore, Body Count’s seventh studio album, came out in March just as the pandemic was locking us all down. It’s been well received, but T and the band have unfortunately been album to push it as they would want.

“We had shows in L.A. and Hollywood,” T says. “We were supposed to play New York. We had a month-long tour set up in Europe and all these festivals. We were going to play to a million people and it all got shut down. So, with Carnivore we haven’t been able to do any live shows. It sucks. Now, the fact that people are listening to it that we got nominated… yeah I’m happy for that. But you don’t make albums for that. You make albums so you can go out and jam. It sucks. Then it comes time to making a new record and it feels like we haven’t really dropped this one.”

“Maybe the people on the committee are more hip or are more conscious or are looking at a lot of different performances,” he says. “Body Count is very literal. You can get it. You know what I’m singing about. Maybe there are people there who really understand Body Count. The Grammys are the kind of thing that people say, ‘I don’t care about The Grammys. I don’t care,’ until you’re nominated. Then, all of the sudden you’re like, ‘Oh. I want to win it!’ We’re just happy that we are being acknowledged. When you make a record sometimes it takes two years to make that record and then to have someone even acknowledge it with all the thousands and thousands of records that come out that year…that’s a victory.”

“Juan is an incredible guitar player,” he says. “Evildead and working with Body Count, it’s all in the same vein. We really needed Juan. In a metal band you either have two guitars or three. We need three because Ernie [C] wants to do solos and adlib over the top. Juan really holds the track together when we play and it takes a special kind of guitar player to be able to hit every riff on every song with power and stay locked in. Juan was an extremely necessary element of Body Count. Evildead is dope and we are lucky to have Juan. I named him Juan of the Dead because he came to me and said ‘I’m in a group called Evildead,’ and I said, ‘Okay. Juan of the Dead like Dawn of the Dead.’

Though he hasn’t been able to promote Carnivore to the degree that he would have wanted, he’s been able to stay sane in lockdown by playing video games and enjoying time with his daughter.

“I’ve got a five year old and without the lockdown I never would’ve spent this amount of time with her,” he says. “I don’t mind being locked down. Fortunately, I’m not strapped for money. I’ve worked for so many years, so I’m okay. The hardship is on other people that work week to week and month to month and haven’t been able to go back to work. They have been forced to be involuntarily unemployed. That’s gotta suck. The bills keep coming. My bills keep coming. I can see panic. Add that to people getting sick. We’ve had people in our family come close to death from this. I’ve lost 10 people. It’s a rough one. It’s rough for everybody. Everyone is dealing with the pandemic differently. I’m just trying to hold my family together. My sanity is alright. I know I’m not in prison. That’s when I know I’ve lost my mind.”

“The only thing we really have for Body Count is we are going to do a fan made video,” he says. “We haven’t said anything about it but hopefully we can promote it. We are unable to do videos and we have a song on the album called “The Hate Is Real”, which we are going to pitch it out to fans to see who can make the best video based on the song and the winner gets paid. So, we are going to do that and try to stir up a little energy on the internet based around that song. It was my idea because even when you don’t ask, fans will make videos of your songs, so why don’t we just have a contest. A lot of kids are sitting at home. They’ve got editing programs. They’ve got cameras. They can go out and make a video. I’ll be interested to see if they can include us in the video. I don’t think so but who knows. They might be able to use CGI and have us in the video. We are just going to see. So, we’ll have a contest for that. Other than that, I’m writing down ideas. It’s kinda hard for us to move forward considering how the pandemic kinda stunted everything and made it so that we haven’t even performed this album. It’s kinda hard to start another one.”

He’ll get there. He always does.

Body Count’s Carnivore is out now.