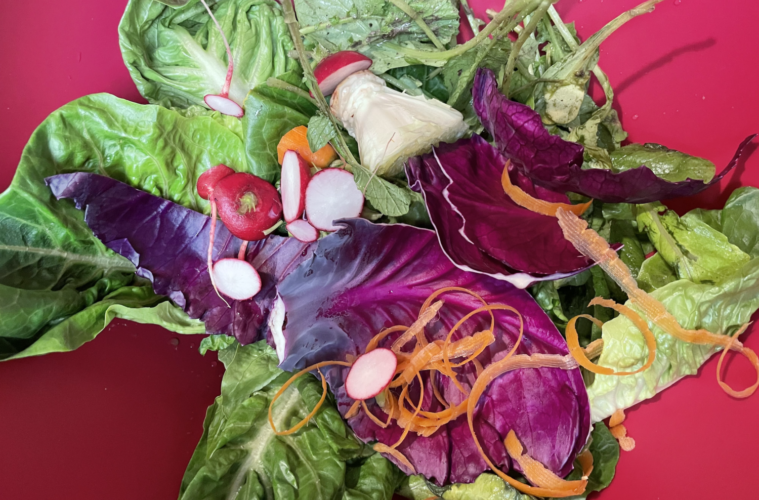 One person’s waste is another’s compost and the reality is that trash can be beautiful. One of the new year’s new laws taking effect this January will crack down on California’s food waste in hopes of helping reduce the disposal of organic waste in landfills – including edible food – in an effort to redirect 17.7 million tons of waste by 2025.

According to the L.A. County Sanitation Districts, 4,000 tons of food waste are generated in Los Angeles County every day, which includes dinner scraps as well as spoiled fruit and vegetables from grocery stores and restaurants. Decomposition of food waste (organic material) in landfills produces methane, a greenhouse gas that is 23 times more potent than carbon dioxide. In a landfill, this decomposition takes decades, and even in well-controlled landfills some of the methane leaks into the atmosphere. In a wastewater treatment plant’s anaerobic digester, the decomposition takes place in a few weeks and none of the methane leaks. By digesting rather than landfilling food waste, we can reduce greenhouse gasses in our atmosphere that contribute to global climate change.

Senate Bill 1383 will require cities and other jurisdictions to divert organic waste from landfills. The law requires that at least 20% of the edible food that is currently being thrown out be redirected to people in need. The remainder of the organic waste stream can either be diverted to composting or anaerobic digestion. The state plans to begin enforcing those requirements this month.

The bill  mandates that Californians deposit unused food – including coffee grounds, egg shells, potato peels and other food waste – into our green trash cans that hold garden trimmings and leaves as opposed to the landfill waste that ends up in the black trash can.

Tier one starts this year and will monitor wholesale food vendors, food service providers, food distributors, grocery stores and supermarkets. By 2024 it will include proof of recycling programs by restaurants, hotels, health facilities, large venues and event facilities.

“The whole world faces the same problem of food waste,” Maen Mahfoud tells L.A. Weekly. Mahfoud’s company Replate directs businesses with communities in need of food like chain restaurants and supermarkets like chipotle or whole foods to neighborhoods that are facing food insecurity. These communities tend to be nonprofits like soup kitchens, shelters, youth programs and senior centers that can utilize the surplus food.

“Something I adhere to religiously is not going food shopping when you’re hungry,” says Mahfoud, who has already been consulted by CalRecycle, the government organization overseeing the mandate. “This is something that I really take seriously. When you’re hungry while shopping you always tend to overbuy because you’re thinking of two dinners instead of one.

“Don’t fall victim to those ‘use by’ dates. There’s a lot of confusion here and an area where we can cut down on food waste. We need better labels so consumers know what can be eaten from a safety standpoint or what just isn’t going to taste as good but can still be eaten. In general, things that are “best by” can be eaten after that date, it’s just not going to be as fresh. It doesn’t mean you have to throw it away.

“Eggs and milk can have a ‘best by’ date, but it’s still safe just not as fresh from a flavor standpoint. Find ways of creating recipes with the leftovers like soups. Freeze your half-cut jalapeno or onion and use them later. Freeze your overripe bananas and make ice cream out of them.

“We live in a culture of three fridges, with one in the garage to store all sorts of food, much of which gets forgotten. We tend to go to the big box stores and stock up in big amounts. But at the end of the day, there’s nothing fresher than going to a smaller grocery and getting just enough fresh produce that you need. I encourage more grocery shopping in smaller amounts. Then you can gauge how much you actually need instead of just buying a whole bunch at one time. Your food mood might change tomorrow and your decisions may change, so why lock yourself so early into what you’re going to eat later. Current shopping is better than once a week big buys. In two days, you may feel like eating something totally different and you have excess waste.

“While you’re prepping meals, throw the scraps in a recyclable brown paper grocery bag instead of the sink, which can get tossed directly into the green bin.

“You can freeze your food scraps and store them in your freezer until collection day and add them to your garden waste. You can also freeze things like herbs and vegetable scraps and use them later for soups, stocks and stews. Freezing it helps keep odors down and vermin out.”

Here’s a little refresher course from Los Angeles Sanitation of what goes in each bin.

And here’s additional information on SB1383.