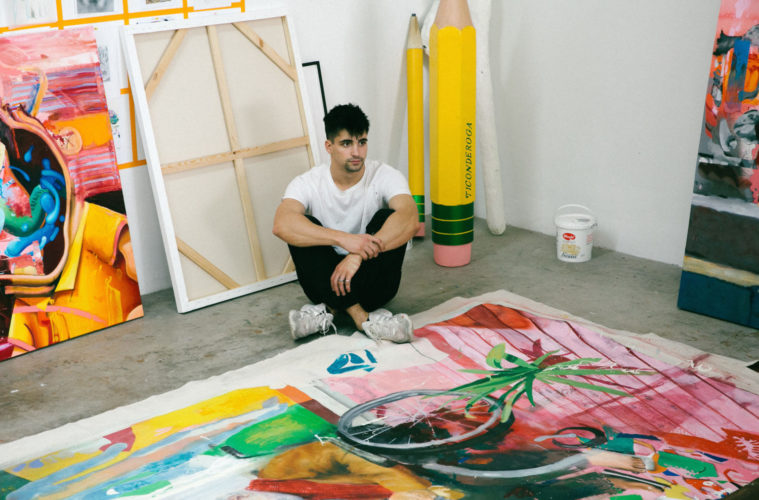 Lush and large-scale paintings by Sol Summers are packed with color, movement, texture and a surreal perspective. They frequently depict recognizable portraits of famous and infamous figures — from Basquiat to Bin Laden, Jim Jones to Frida Kahlo — in an expressive, post-digital and apparitional style that transforms the work into something profoundly personal and mysterious. Summers is currently dedicated to a painting cycle that further explores his own artistic visionquest, navigating art history and the art world in the same mode as the portraits have investigated how we construct mythology and history.

L.A. WEEKLY: When did you first know that you were an artist?

SOL SUMMERS: I think I was an artist long before I probably realized it or started calling myself one. I remember sometime around 20 telling a mentor that I wanted to be an artist. He responded by telling me I already was. I think for a long time I thought my work had to be perfect or commodified for it to be “art,” when in reality art is just an act, not an end. If you’re expressing yourself, in whatever medium, you’re making art.

I went to RISD briefly but I ended up leaving because the impending debt burden (which my loving parents wanted to help take on) filled me with guilt. My experience was positive, I met so many talented artists, but I don’t really regret that I never finished. So much of finding your voice comes down to unlearning rather than learning. For me there had to be an excavation process before the building could start, finding out who I was underneath all the cultural conditioning, imprinting, life experiences, etc.

When a gas fills an area, say a balloon, the molecules collide with each other at a rate relative to the pressure applied on them. There are many inspiring places I’d love to live but few can match the density and quality of artists of L.A.

My last solo show was in New York in 2019. Currently I have a few pieces up in a group show at Maddox Gallery. My newest paintings have yet to see the public eye, but I’m really excited about them. They follow the journey of an artist preparing for a show. The protagonist is plagued by anxiety and self-doubt, but the story that unfolds is ultimately a hopeful one. The character in the paintings is a younger, more anxious and less confident version of myself. I suppose the missing painting that ends the series is the present me, who is far happier and less worried than the younger me ever would’ve thought possible. Nowadays I only have two conditions when it comes to making art: 1. Use your imagination. 2. Have fun.

Lately I’ve been really into animation. I’ve been trying to apply the principles of animations to my work. I’d love to work with Ralph Bakshi. He has inspired me a lot. I also love Tarkovsky. I have this idea of shooting the creation of a painting from start to finish that has never materialized, but if I had the chance I would make a Bob Ross-esque video with Tarkovsky for TikTok. If that makes me sound crazy, yeah some dreams are meant to stay dreams. As far as painters, I’ve always wanted to show with Christian Rex Van Minnen or Adrian Ghenie because they’ve influenced me a lot creatively.

I have a love-hate relationship with music. For the longest time I shunned music out of my life, thinking that would somehow make my visual faculties more acute. Like how they say blind people’s hearing is heightened. That was a pretty extreme take. Nowadays I’ll listen to music about half the time, or other times I’ll just put on a Terence McKenna lecture and let it play in the background while I paint.