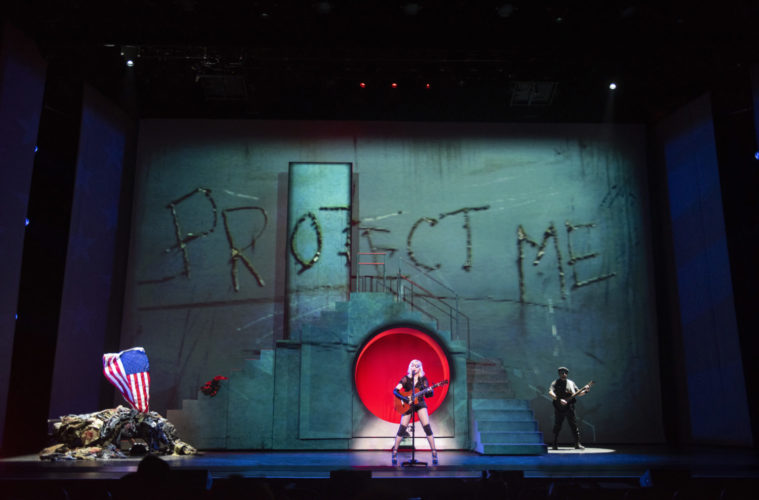 That Wiltern show is one that we reflected on for quite a while afterwards. There’s definitely a concept to the Madame X thing, though it was difficult to fully grasp at a gig when there was so much going on. As we said at the time, it seems deliberant vague. This film offers us the chance to wallow in it, close in on some of the typed captions and quotes, and fully soak in the videos that, live, were screened behind Madonna as she performed.

Madonna’s strongest traits are the same things that her naysayers criticize her for. Her effortless ability to do what she wants and give zero shits what anyone thinks about it is turned around as being inauthentic attention seeking. Her chameleon-like shifts between musical styles is twisted into bandwagon jumping by cynics. Well, fuck the cynics.

Right at the start of the concert film, we’re greeted with the James Baldwin quote “artists are here to disturb the peace.” That’s perfectly apt; Madonna has made a career out of doing that very thing and she should be praised for it. So, who is Madame X? “A dancer, professor, a head of state, a housekeeper, an equestrian, a prisoner, a student, a mother, a child, a teacher, a nun, a singer, a saint, a whore…a spy in the house of love.” Regardless of which hat (or eyepatch) she’s wearing, Madonna is a complex, multi-faceted artist and she’s keen to celebrate each and every one of her sides. As she should.

We already reviewed the concert in L.A. — there’s little point going over the same ground. The gig used for this film is from Lisbon, which makes the bit of the show where she performs Isabel De Oliveira’s “Fado Pechincha” a little more poignant. She does, after all, live in Portugal where she is supporting her son’s love of soccer.

The songs from the Madame X album still sound great, while “Vogue” and “Like a Prayer” are greeted like the classics that they are. She encores with “I Rise” and then she’s gone.