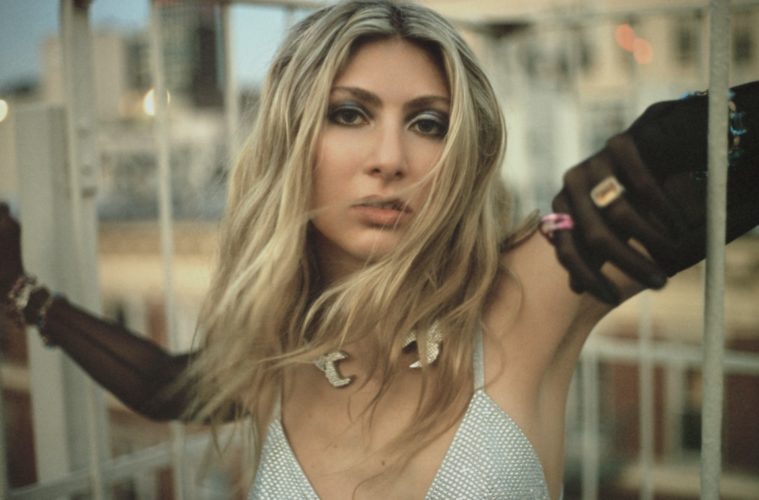 Blu DeTiger’s Funky Indie-Pop is All NYC: Blu DeTiger resonates New York cool. She loves her hometown, and it swells out of her. Whether it be her music, her style, her look – DeTiger is walking NYC.

When we ask her to list her influences during our Zoom interview, the first two names out of DeTiger’s mouth are Blondie and the Talking Heads. That makes complete sense. That it was the two CBGB bands who were able to cross the punk divide into mainstream massiveness that had the biggest effect on this young artist tracks when listening to her own music.

The next two names she mentions clear the water further. New York funk band Chic (and bassist Bernard Edwards), and Brooklyn’s own LCD Soundsystem. DeTiger describes her own sound as funky indie-pop, which works but only scratches the surface. DeTiger has a Nico/Velvets/Warhol swagger, a sultry look of deceptive indifference that draws listeners in with a wide web of intrigue. She proudly states that her first ever show was at the sadly deceased CBGB, but she would be just as attractive to the Studio 54 crowd. Like HRH Debbie Harry, she’s drawing inspiration from all corners of New York.

“I’m influenced by it and born and raised in New York, so I guess I always felt that growing up,” she says. “The creative energy here is insane. So I think it definitely influences my sound.”

DeTiger took a dive into music three years ago, picking up the bass guitar first. She was serious about her art right from the get-go.

The release of the debut How Did We Get Here EP last year saw DeTiger earn high praise from all corners, not to mention 80 million streams across the world.

“I’m really grateful that people are listening,” she says. “I think I didn’t realize the impact until I played shows and I played those songs for people, and saw people singing them back at me. I think that was a powerful moment. Because you know, you put out songs during the pandemic era and all you see are numbers on the screen. You don’t know how it’s impacting people. So you play a show, and everyone’s there to sing these songs with you. I think I was definitely really, really stoked on the response and I’m really happy that people connected with the songs. I didn’t fully realize the magnitude until I started playing shows and then I was like, ‘Oh my god, people actually know the words to these songs – it’s crazy.’ So I think the shows are when I realized it but I’m really happy that people listen. It’s my first EP, so it was me kinda introducing myself to the world and I’m excited to expand on it.”

“‘Blondes’ is about getting away from the monotony that you can get stuck in with life,” she says. “Just about spicing up your life with different little things. Wanting to get away from that everyday feeling – the same sort of thing. It’s really fun and has that disco, New York post-disco vibes in the track for sure.”

Yep, it’s jam-packed with New York disco vibes. She’s singing about being home alone trying on all of her dresses, but the video sees her dancing in the club, before picking up her bass and taking to the stage. At the end, she drops the instrument with cool abandon and simply struts away. Giving zero shits. The song and the video are the latest in a long list of career highlights for DeTiger.

DeTiger’s entire career has taken off during the global pandemic. She barely has any context to weigh the past two years against. Thankfully, all that is changing now. And besides, she made the best of it.

“Just because it was all from home, I think everything is online and I think that changes the way you maybe market things or just the way you talk about things is different,” she says. “You can’t see the impact, like I was saying before, when it’s just all online numbers. You can only feel so much. So it doesn’t feel surreal until you actually physically see people that the songs have connected with I guess. But for the pandemic, a lot of online work and trying to utilize social media in the best way that I could to get people to listen.”

Looking ahead, DeTiger is focussing on finishing up a bunch more songs.

“I have another song coming out soon,” she says. “Another song ready to go that I’ve been playing on tour and the fans are already like, ‘release it.’ So that’s coming soon. And just writing a bunch more. Then a lot of touring next year as well.

We’ll look forward to it.