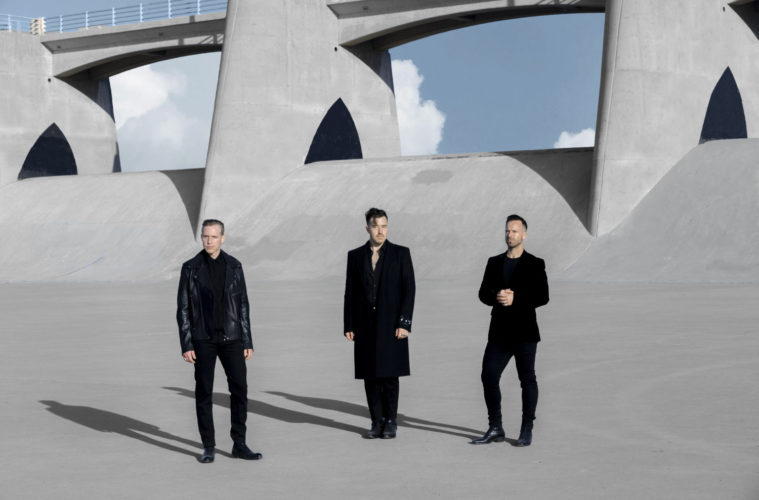 Alive and Kicking: Australian, L.A.-based electronic project Rüfüs Du Sol are not used to playing stadiums. They’ve performed in big venues around the world – prestigious theaters and arenas. But they were dipping their toes into deeper waters when they were booked to play the Banc of California Stadium. When they sold 70,000 tickets in three days, and then a second date was confirmed, and then a third, it was clear that something big was happening.

It’s a just reward for steady progress since forming in 2010. They did hit the ground running with the 2013 debut album Atlas, which Lindquist describes as a “very hopeful record.” But their evolution has been staggering.

“I feel like we were learning – we’d been in Berlin [for second album Bloom] and we were trying to create the sounds that we were hearing in the clubs from acts that were in Europe,” he says. “We weren’t good enough producers to be able to clearly replicate the things that we wanted to do. But us falling short ended up in its own little realm. Then by the third record, I feel like there’s more vulnerability. We were better as producers, to be able to take what was in our brains and hearts and translate it to music. John and James in particular are such amazing producers, and it’s just really fun to be in a studio with them – it’s like a playground. They’re able to translate an idea that we are conceptualizing into reality very fast.”

“I see the whole rollout as a bit of a miracle for us really,” says Lindquist. “I know that’s sideways, but I think we’ve been together as a band for 10 years. We’d written our third record, we’d undergone a lot of change, we’d moved over to L.A., and I’m a father and married. So a lot has changed in the last 10 years and we as friends and bandmates have had to reconnect. Remind ourselves what it is that we do this for. The pause in the middle of an album cycle because of COVID was a big gift for us because it let us slow down and rethink where we wanted to go, who we wanted to be. But of course, it was really sad to be in the middle of playing some of our biggest shows.”

In March of 2020, just before COVID had us all locked down, the band released a live album, Live From Joshua Tree. The California spot, Lindquist says, is a special place for them and the recorded show turned out as good as they had hoped.

“It’s been a special place for us since we came over here,” he says. “We’ve done a lot of writing sessions out there, and it’s just got this special place in our hearts. It’s close enough to L.A. We’d been there for Thanksgiving weekends with a bunch of our friends, and got a house. It’s just so immersive with the sky. So expansive and clear. The stars really illuminate through the blackness of the sky, and it feels really magical out there. You feel like you’re on Mars or something. It feels surreal and fun, and when we were talking about where we wanted to do the show, that was one of the first places.”

So the build-up to their forthcoming fourth album has, against all odds, been pretty seamless. The album is called Surrender, due for release on October 22. The first single released was quite appropriately named given world events, “Alive.”

“We knew that we wanted to put out ‘Alive’ first,” says Lindquist. “Just given the time and circumstances of everything. Our personal lives, having undergone a lot of change. There’s a certain hopefulness in the song that we really liked. That’s how we feel as a band. We felt a lot of hope. It’s been like seeing light at the end of the tunnel after a dark couple of years. It feels really great.”

It’s a feeling of hope, almost of relief, that permeates the whole record. The group has been listening to Northern Irish DJ and production duo Bicep, delving into breakbeat. With the next single “Next to Me,” they displayed a more cinematic, but also celebratory, side.

“We wanted to put something that just feels really celebratory and loving out after that,” Lindquist says. “It was fun. We wrote it partly in Joshua Tree and partly at our studio here in L.A. It just came out quite easy. One of the lyrics and the chorus is basically saying something about goodbye, and we were like, ‘maybe this is that song that doesn’t need to be bittersweet, maybe it should just be a pure love song.’ For me, I found it really nice to think about my upcoming wedding. It was five months away and I’d been engaged for two years. I just found it easy to put those words down. I tried singing it at my wedding to my wife as a surprise but I couldn’t get through the words.”

There’s a clean, organic feel to the production, and that’s true of the whole album. “We’re really drawn to anything that’s organic in sound while still being electronic,” says Lindquist, and it shows. In addition, the band has made themselves at home here in L.A., and that level of comfort makes its way into the sound too.

“We saw L.A. as a bit of a melting pot for a lot of artists from everywhere in the world,” says Lindquist. “It was an exciting place to be. It’s a direct flight to Sydney, which is our home, and it was easy to get to Europe too in terms of touring. It’s a long way to get to Europe from Australia. They were the main reasons. We stayed here to write our fourth record. There’s more to explore here, we’ve also made a lot of lifelong connections. This is definitely our home.”

So what can we expect from the Banc of California sets? Big things, apparently.

“We’ve got a totally new live show, and we’re still learning the new live songs from the record,” says Lindquist. “Integrating those into our show. But we’ve been building a really big live show. Going from 20,000-person outdoor venues to doing three stadium shows, there’s a lot more lights and it’s a bigger machine to handle. It’s exciting. We had a big warehouse a month ago, just before our Denver shows at Red Rocks. We had two weeks in a giant warehouse, building the show out from there, from scratch. It’s exciting and it looks great. We’ve still got a little way to go but it’s getting there.”

By then, Surrender will be out and the crowd will know the songs before they hear them live. Lindquist is understandably psyched with the work they’ve done.

“It really was the biggest gift to have been put on pause because of the pandemic – to be able to just explore uncharted territory for ourselves,” he says in conclusion. “We made a lot of terrible songs and some really great songs too. We just got to have a lot of fun and reconnect, and we’re super proud of the album that’s there.”

Alive and Kicking: Rüfüs Du Sol’s Surrender album is out October 22. They play at 7:30 p.m. on Friday, November 12, Saturday, November 13 and Sunday, November 14 at the Banc of California Stadium.